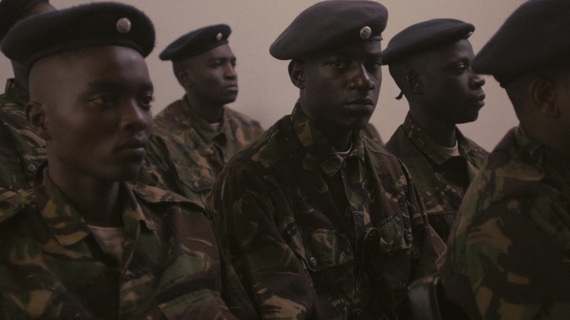 (A still from Tuko Macho)

The Nest Collective, a group of talented young artists and thinkers based in Nairobi, has been quietly but effectively restructuring the landscape of queer African narratives in film and literature for the last few years. They have now turned their attention to TV production, and the resultant series, a riveting crime drama called Tuko Macho, presents the viewer with a new standard for what's possible within interactive web-based TV.

Tuko Macho, which remixes the police procedural drama and transfuses into the results scalpel-sharp social commentary, moral intelligence and slick production values, focuses on a vigilante group that kidnaps a well-known carjacker, films him and asks the city to vote whether he should live or die as a consequence of his crimes. Nairobi, which has been given the unfortunate nickname 'Nairobbery', overwhelmingly votes for the man to be put to death, which sets off a series of tragically inevitable or tragically avoidable events (depending on which side of this debate you're gunning for).

The genius of the show is that it makes the viewer complicit in every action of the vigilante crew. Would you vote yes to kill an armed robber if you had the chance? It's a setup that recalls the ruthlessness of the Big Brother franchise (if Big Brother supplanted evictions in favor of murder as part of its format).

After each episode viewers take to Facebook and Twitter, and in a synergistic echo of the show's fictional viewers, vote for whether the criminal on offer should be killed or released. Not all the criminals are carjackers, and The Nest Collective up the ante by presenting characters whose moral corruption belies their respectable standing within the community.

Tuko Macho is a gorgeously shot, well-scripted and gripping drama that confounds easy categorizations. It is a seductive series that possesses the power to rattle.