The afternoon is turning increasingly dusky, and outside the window, October reds have given in to November blues. I hold my tea closer to my chest as a familiar little tune surfaces in my head. Juliette Greco's heartbreaking voice: "Les feuilles mortes se ramassent à la pelle" ... 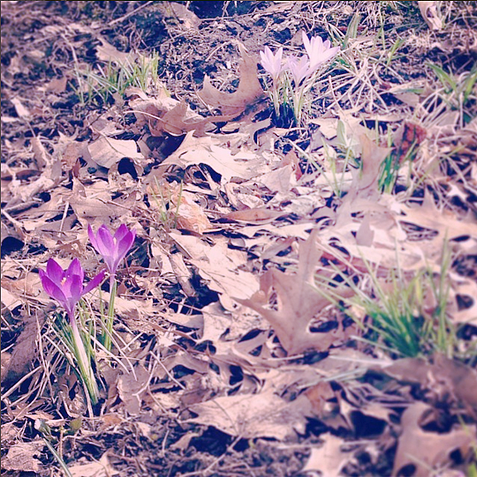 Prévert's poem was first sung in the twilight of World War II, in a Paris overrun with fallen leaves, fallen rubble, fallen lives. A little like Paris now. Six hundred versions would subsequently be recorded in French, one thousand four hundred versions in all, making the simple words and haunting melody one of the most famous songs in the world. Perhaps because it struck so close to home, and sixty-nine years later, still does.

"C'est une chanson qui nous ressemble." We who have carved statues from stone and built cathedrals on hills. Dug channels and wells, launched ships, revolutions, and art movements. Created gods and defied them, performed heroic feats and recounted them in verse. We "stone-cutters, fighting time with marble," who in spite of it all, are as finite as falling leaves.

"... human all too human this breathing in and out out and in"

Spending our history, and our lives, trying to demystify, justify, romanticize, evade, delay, ignore the inevitability of death. For good reason; this life is the only one we get.

The scarcity principle in economics states that the value of a commodity is determined by its availability; a good that is rare or finite is more valuable than one that is abundant. "The world is little, people are little, human life is little." Survival is a biological imperative; whether we use religion, philosophy, astronomy, biology, anthropology, imagery, incense or tarot cards, we are programmed to fight, even a losing battle, for our lives.

Trying to explain what they died for is like trying to stop the fall of autumn leaves. Futile, and sad. "Like flowers scattered in a storm, man's life is one long farewell," and this life, eventually, will kill us all. Bukowski said that there is nothing to mourn about death. "What is terrible is not death but the lives people live or don't live up until their death."

I cannot, will not understand what all these people died for, but I wish I knew what they were living for. I wish I knew the poems they wrote and the lovers they read them to. The symphonies they composed and the children they made. The last book they read, the best dessert they had. The trees they carved their initials on. The Christmas presents they were saving for. The inventions they were patenting, the novels they were developing, the omelet recipes they were perfecting. The person they were coming home to. The paused songs in their earphones. The uncrossed items on their to-do lists.

"Les feuilles mortes se ramassent à la pelle," and eventually, so will we. Nietzsche was right. We are only "human, all too human." But it is our humanity that should make us "... mad to live, mad to talk, mad to be saved, desirous of everything at the same time, [...] never yawn or say a commonplace thing, but burn, burn, burn like fabulous yellow roman candles exploding like spiders across the stars."

This kind of life, this all too human life will kill us, but it is that certainty that makes it worth living at all. So for all those who no longer can, let us honor it.

"Let's lay around and make love and take walks and talk a little. Let's go to the zoo. Let's look at animals. Let's drive down and look at the ocean. [...] Let's play games in the arcades. Let's go to the races, the Art Museum, the boxing matches. Let's have friends. Let's laugh."

Let us live a kind of life worth dying for, whenever we do.

For the victims of the terrorist attacks on Beirut and Paris, on the 12th and 13th of November, 2015.