Reverend Dr. Martin Luther King Jr. was born in Atlanta, Georgia, but as in so many cities and towns throughout the country, his impact on Los Angeles was strong and far-reaching. King visited L.A. on numerous occasions to speak about equal rights and encourage voter participation, sometimes under tense circumstances, and thousands would turn out to hear this great orator and Nobel Peace Prize winner. King seems to have been comfortable speaking anywhere and the venues he appeared in were wildly varied, such as the Los Angeles Sports Area, the Second Baptist Church, the University of California, Los Angeles (UCLA), and the Hollywood Palladium.

In the wake of King's assassination on April 4, 1968, the city mourned the fallen leader, and then eulogized him with memorial services held at the Los Angeles Coliseum and the First Methodist Church. In 1983, Los Angeles officially honored the activist by renaming Santa Barbara Avenue as Martin Luther King Jr. Boulevard, three years before his birthday was declared a national holiday. The nearby city of Lynwood followed suit in 1989 by rechristening Century Boulevard with King's name.

Forty-five years following his untimely death, King's presence in Los Angeles is still apparent. In additional to King Boulevard, where the Kingdom Day parade is held annually on the weekend preceding the holiday, his name is affixed to places around the city like schools, parks, a community college library, and a medical center. Los Angeles may have not been King's home, but that didn't stopped countless residents of the city from welcoming him and his ideas.

A King in the City of Angels
MLK and Los Angeles 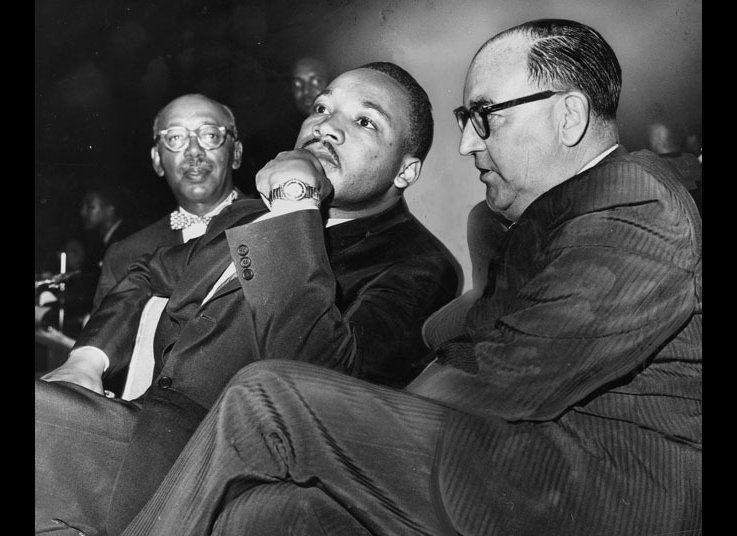 1 / 10
Los Angeles Sports Area, 1961
Rev. Dr. Martin Luther King and Governor Edmund G. Brown during a Freedom Rally at the Los Angeles Sports Arena on June 18, 1961. An audience of 12,000 was expected at the 18,000 seat venue. When over 25,000 people showed up to hear King speak, many remained outside and listened to the speech over loudspeakers. (Los Angeles Herald Examiner Collection/Los Angeles Public Library)