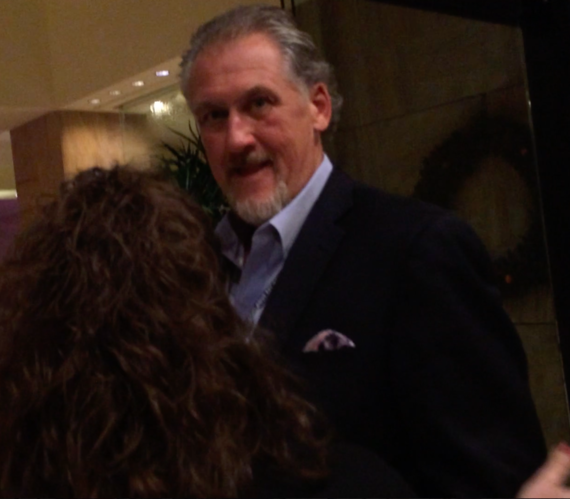 The American Legislative Exchange Council's three annual meetings are quite the spectacle. This month, at ALEC's third and final meeting of the year in Scottsdale, Arizona, I had an interesting encounter with a member of ALEC's board of directors.

His name is Mike Morgan. He's a top lobbyist ("government affairs director") for Koch Industries in Kansas, and has helped direct ALEC's work for decades.

I've written about Mike before. He presided over ALEC for its most controversial initiatives, like when it manipulated the content of K-12 science classes, and when the NRA used ALEC to spread Stand Your Ground laws. He was part of an orchestrated state-by-state attack on clean energy incentives, involving Koch Industries and its many front groups: Americans for Prosperity, ALEC, and university professors funded by Charles Koch.

Greenpeace is highly critical of decisions Mike Morgan is involved in. Imagine my surprise when I bumped into him.

I filmed a terse interaction with Mr. Morgan for about ten minutes. The video clips were effectively compromised by ALEC's private security guard who wielded a flashlight to hinder my filming.

At the end of the exchange, Morgan snatched my phone away and made off into the hotel hosting ALEC's conference. I attempted to flag Koch's true intentions with their criminal justice reform push, which Morgan did not like.

Morgan went to snap my phone in half, then reconsidered. He's a large guy, and he's known to use intimidation as a lobbying tactic, according to a Republican state senator in Kansas.

As I attempted to retrieve my phone, ALEC's private security guard obstructed my path (gently). Mr. Morgan fled and jeered at me. He retreated into the hotel through the gift shop, past confused employees. I was stuck outside, at the mercy of ALEC's security, hotel security. I could only wonder what was being done with my phone inside the hotel.

The police were called in to remove me from the property. It was a calm, professional exchange. I complied fully with their requests. I told them that a lobbyist took my phone after a political debate. The officer ensured me I would have it back before police escorted me off the property.

After about fifteen minutes, Mike Morgan came back outside. He withheld my phone in his back pocket and began to go on a tirade, until police demanded that he return my property.

He indicated that he tried to open my phone and delete the video, but couldn't unlock it and thus posed no threat.

I asked: why would someone from Koch Industries and ALEC, which tout "private property rights," run off with my private property? I suspect that if I grabbed his phone and ran off, I would have spent the night in jail.

Mike suggested that had I simply requested an interview, or asked him to sit over a beer and a cigar, he would have happily obliged.

He asserted that Greenpeace's commitment to nonviolence is a scam of some kind, he assumed I would have reacted violently if we hadn't been in such a public space. I looked up at him and joked: even if I was prone to violence, why would I pick a fight with someone who could easily rip my head off?

My mistake was assuming this joke would dissolve some of the palpable tension. Instead, it riled him up, taking me by surprise. He locked eyes and took a purposeful step toward me. The two officers present bristled.

I was nervous, and confused, and cannot recall what he said in response. He later suggested that if we were to settle this the way he settles things where he's from, it would be a physical encounter. Real comforting.

After settling, Mike and I shook hands. He turned to walk away, then paused. Turning back toward me, he asked me a question that came across as a warning: Will the footage I took of him ever see the light of day?

I said I wasn't sure. Mike was not pleased.

I'll end with an open appeal to Mike Morgan, who told me off-camera that he has read my accounts of him before.

Thank you for reading, Mike. I hope you agree that this account is fair and accurate.

You spoke about the value of being a gentleman, which at face-value I absolutely agree with.

It's not gentlemanly to manipulate legislators to secure market favoritism for Koch Industries, against clean energy competitors, at the expense of their constituents.

Nor is it gentlemanly to finance and govern a group like ALEC, which passed Stand Your Ground laws that have increased rates of gun homicides.

Nor is it gentlemanly to take away people's right to vote, in order to help elect the political party that is more eager to take your money and serve your interests.

Nor is it gentlemanly to continue financing organizations that deny climate change, at the expense of my generation, and those that come after me.

I am not sorry to say that your business is less important than the future of we, the people. That's why I put a camera in your face. If you don't agree these are reasonable complaints, than I doubt it is something we could fix over beer and cigars.