Having grown up in Kuwait, Maali Alasousi had the option to travel to the U.S. and Egypt to pursue her education, and then later start her own company. Up to that point in her life, her goal was to promote tourism in Kuwait. But she sold her company and refocused her career after a trip to Yemen in 2007.

A client wanted to donate to different Yemeni organizations that were training women to produce products that could reach an international market. Alasousi was skeptical that a proper review of the organizations could be done on the ground in a short time; the country's lawlessness also put travel limitations on her. 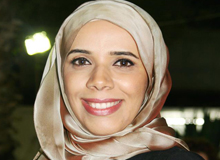 Still, she traveled to Yemen, and was forever changed by the trip. She saw heartbreaking scenes of poverty, such as women and children eating from garbage, and shocking treatment of young girls. When she returned to Kuwait, she returned the money her client had paid her. She then made the decision to move to Yemen and work on social development projects.

Alasousi has since worked on a range of social projects in Yemen, from turning farmers who grew the highly water intensive and mild narcotic khat into coffee growers, microfinance schemes, anti-blindness campaigns, and promoting cancer treatment and other health prevention programs. She works with over 35 partners and identifies good local partners by giving clothes and food to distribute and checking whether they steal. Alasousi says for both local and international partners, she doesn't work with agencies with political or religious agenda.

Adjusting to life in Yemen hasn't been an easy transition, she admits. There are constant power and water outages and it can be difficult to have access to gas. It can be normal to have to wait six hours to send email because of electricity cuts. During the first year, she contemplated leaving but seeing the impact of her work motivated her to stay. Some examples that come to mind were girls who couldn't afford to study but dream of being in school for things like medicine or engineering.

"Families are so poor, they cannot afford the five dollars a month it costs to use a taxi or transportation to send their children to school," she says. Alasousi worked in rural areas convincing parents, brothers, tribal and religious leaders to let girls in the village study. It was a challenging task and often took months to persuade a handful of community leaders to let 10 girls study. She managed to persuade then by talking about the benefits of education. She also said that she would not give a donation to their communities unless they sent girls to school.

Her own educational experience prepared her, she said, to be independent. While attending university in the United States, Alasousi was under a government scholarship to study mass communications. After a few classes, she changed her major to tourism planning and management but ended up losing her government scholarship as a consequence. Her parents were unhappy with the news and told her she had to support herself. Alasousi stuck with her decision and got a campus job. Looking back she says having to find a job and support herself added to her skills building beyond what just attending classes could offer. "Working while in school made me more responsible at a young age," she says. Upon receiving straight A's, the Kuwaiti government decided to reinstate her scholarship.

Today the Yemen-based organization she founded "Tamkeen For Development Organization (T4D)" has supported over 120,000 families. She focuses on empowering women in education and developing SMEs (small- and medium-sized enterprises). Some of the projects of T4D include the "Craft Network Project" to support artisans who live below the poverty line and "Invest in Education Project" providing scholarships to over 400 girls who come from rural areas. She recently began to extend T4D's reach to Ethiopia to support projects for women and children in HIV-affected families. Since 2007, Alasousi has been based in Yemen until recently when the security situation forced her to leave. She hopes to soon return and speaks on her experiences working there as well as her background and ways to run a successful development organization.

Alasousi admits that being Arab gives her a huge advantage when interacting with communities adding that most rural communities in Yemen are not going to accept Europeans or Americans. She recalls two doctors she knew from Holland who were shot because people suspected they were doing missionary work. "I'm 100 percent sure they didn't come for that," she says, explaining that they were there to educate midwives. "They were doing a great job but unfortunately word spread and they got killed."

Alasousi explains that just as you can't open a McDonalds in a Yemeni village because people don't know what it is and don't eat burgers, you can't open up an operation without understanding the local people and their needs. "You can't just come and copy something that worked somewhere else, it just doesn't work," she says. Alasousi takes her work a step further -- rather than depending on international, local or government studies, she always does her own research as well to ensure their accuracy. She has a steady stream of funding from friends, family and patrons across the Gulf region.

"Being socially aware and helping the poor and disadvantaged is something that's part of our religion and what we're obligated to do. It's not because your Muslim or non-Muslin, you find such teachings in the Bible as well," she says adding that giving and helping others goes beyond even religion, it's part of being human.

Her desire to do public service still raised suspicion; she was monitored for two years before being given a license. "I'm Kuwaiti and doing work in Yemen, I left a high standard of living to live in Yemen so I see why people would become suspicious but when they get to know, they start to help me," she says.

Despite the difficulty, Alasousi says there are beautiful things about life in Yemen. She describes Yemenis as a cooperative society untouched by the materialistic world. "I find societies like that not just Yemen but also in Kenya, Ethiopia and India, usually in rural areas. It's completely different than the way people behave in the city." For her part, Alasousi wants to use her methodology in different nations, believing it proves that with limited resources, one can make an impact. "I always tell people it's not money that matters, it's the passion and love," she says. "Don't be like others who just want to live, rather live and let others live."

Alasousi explains that with many wealthy families who donate, they know how to measure their personal investments but not their charitable donations. "My goal for 2012 is to focus on the MENA region and how we can take them from charity thinking to development thinking with the usage of money," she says. Committed to empowering people in society through education and health she points to the example of project she created in Yemen for HIV-positive people. Her group spoke to religious leaders explaining that if we don't offer support, the disease will spread. "In Hollywood, all you see are women in the Middle East with a veil and covering their faces and living in tents. I laugh because that's not how we live, that was maybe 100 years ago," says Alasousi.

"They don't often share stories of successful women in the region and that's not acceptable," she says and recounts a story of an American teaching civil society at a Kuwaiti high school. The teacher was lecturing on Greg Mortenson, author of Three Cups of Tea. One interrupted the lecture, asking, "Why are you teaching us about this guy? There's a woman that doing better than him and she's Kuwaiti." Hearing about her work, the teacher said there's no way a Kuwaiti woman could do this. The teacher then looked up Alasousi and was shocked. He invited her to visit the school and speak to students. The first question she was asked was how they could donate. She told them she didn't want them to donate money but rather their time. "People want effort and human knowledge, if you have the knowledge and can deliver it to other people that's considered donation," says Alasousi. She adds that she wishes the West could see all the women in MENA who are doing work in human rights, civil society and business. "Women are taking over, I mentor many young leaders and they are doing much more than just donating," she says.

This article was previously published in Arabic Knowledge@Wharton.