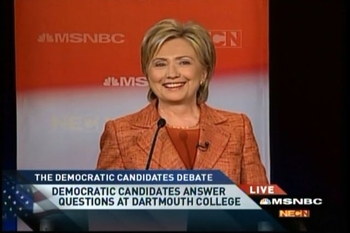 This just in: Hillary Clinton has been laughing a lot lately. Yes, it's true — a candidate long accused of being cold and unappealing has taken to emitting a hearty chuckle in public, and on the airwaves. We hope you were sitting down for that one.

Actually, in this highly-monitored campaign, the decisions of its most-disciplined and most-focus-grouped candidate are news, and the Hillary Laugh Tactic has been noticeable. Jon Stewart picked up on it in earlier this week, splicing laugh segments together (in a way that, let's be honest, would make anyone appear manic), but it certainly set up the punchline: Jon fixing the camera with an intense, humorless gaze and saying "I'M JOYFUL." Frank Rich noted it too: "Now Mrs. Clinton is erupting in a laugh with all the spontaneity of an alarm clock buzzer." And then, of course, there was The Cackle.

NYT reporter Patrick Healy is an expert on The Cackle. He's been observing it carefully since January 2005, he tells us right off the bat. In the middle of heated press questioning, "suddenly it happened: Mrs. Clinton let loose a hearty belly laugh that lasted a few seconds...This was my first close encounter with Senator Clinton, and with The Cackle." This reads with all the slow-building horror of a B-movie Professor explaining to his save-the-world student how he first came face to face with Evil, and learned to name it.

"Friends of hers told a different story," says Healy, that she actually had a "fantastic sense of humor." (Well, they would say that, but Healy can see through them.) Then there's this:

Mrs. Clinton goes for the lowest-common-denominator display of her funny bone: She shows that she can laugh, and that her laugh has a fullness and depth.

Oh, you — you with your laugh of fullness and depth — we're on to you. Go back to the gutter you crawled out of, lowlife.

Seriously. What IS this? This article was deemed significant enough by the NYT to publish not once, but twice, under two separate headlines and two separate dates (Sept. 28th on the web, graduating to Sept.30th in the paper). But when I look at it, I see a hit piece masquerading as analysis. Why? "The Cackle."

Not "The Laugh" or "The Guffaw" or "The Full-Throated Chuckle." No, Patrick Healy, unbiased reporter for the New York Times, called it "The Cackle" — a word best associated with witches and broomsticks ( "I'll get you my little pretty, and your little dog, too!"). If this article were a picture, Hillary would be in a pointy hat with a wart on her nose.

I have no issue with the thesis of the article. Like I said, the laugh is notable, as both a non-verbal element of her presentation and an indication of strategy on the part of by far the most careful (or, as some would say, programmed) candidate. I had noticed and remarked upon the laugh, too, in the last debate, and how it was deployed semi-inappropriately in response to Mike Gravel's Iraq war vote admonition of "Shame on you Hillary!" ("her laugh was a tad inappropriate, given the gravity of his accusation. You can dismiss Gravel but not the sentiment"). I find it less puzzling than Healy why she'd chuckle saying she'd love to talk about health care with Chris Wallace — that's a sweet spot for her, obviously she'd way rather discuss it than be challenged — but it is absolutely worth excavating as a phenomenon overall, given its sudden prominence. Does it mean she's more comfortable? Does it mean she finds Tim Russert hilarious? Does it mean that Mandy Grunwald and Howard Wolfson sat her down and carefully explained to her that a hearty laugh would resonate with 64% more voters 46% of the time in 60% of the primaries? All of that is interesting, and worth reporting out.

But Healy did that glancingly, if at all ("'Seems pretty basic -- that's the way she laughs,' one Clinton adviser said. 'She has a good sense of humor about the process.'" Wow! Awesome intel you got there! You have great sources in that campaign, dude!). What might have been interesting is if Healy had been able to get someone from the campaign to explain how such softening mechanisms are arrived at ("Let's chat!" springs to mind) or who makes those final calls (Grunwald? Wolfson? Bill?) or even introduce polling data that reflects the New Era of Laughter, or maybe juxtapose the laugh-to-airtime ratio of Obama and Edwards. Just to get some data in there. Sometimes that's fun to have.

The Laugh is a great catch, a great story, and a great indicator of what kinds of details can matter in campaigns. And "The Cackle" is a great nickname — if you're Frank Luntz. "The Cackle" is pretty devastating as nicknames go...and just happens to be pretty damn gender-specific. There's a lot more here than that, and if the New York Times had gone for it, they'd have a story and not a smear.

Related In Popular Music From Winnipeg:
Laughing [The Guess Who]