American history is anything but a stodgy affair; it's exciting, tragic, suspenseful, and horrifying. Probably even more surprising is that it can make you laugh--if you have the right teacher, that is. And Sarah Vowell, author of the new Lafayette In The Somewhat United States and former editor of "This American Life," is a great teacher. Her previous book, Assassination Vacation, is the perfect example of how history, especially when it is not about the victors, is fascinating, funny, and heartbreaking. 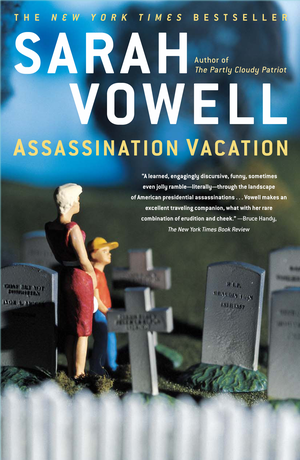 I first read Assassination Vacation in high school, for no other reason than I saw Sarah Vowell promote it on "The Daily Show with Jon Stewart" and she made me laugh. Like most people, I knew only a bit about the two most famous presidential assassinations: the confusing conspiracies surrounding Lee Harvey Oswald, and the belief that John Wilkes Booth was an arrogant actor jealous of his more talented older brother. The other two presidents who were assassinated were nameless ghosts. The tragedy of Abraham Lincoln and John F. Kennedy's deaths seem to weigh heavily on American consciousness, and if you had asked me to name the other two victims of presidential assassination, I would've drawn a blank.

Assassination Vacation not only explained who those two men were but illustrated the very real and poignant tragedies of the deaths of Presidents James A. Garfield in 1881 and William McKinley in 1901. Vowell does not, however, simply recite facts or clarify misconceptions; she brings these men and their assassins, Charles Guiteau and Leon Czolgosz respectively, to life. And throughout it all, she celebrates American history and patriotism, albeit in a book about death and violence.

Vowell doesn't just like history, she lives it. Assassination Vacation is a travelogue of her "vacation" throughout America to research, see, and even touch the places and artifacts related to the first three presidential assassinations. Her enthusiasm for the subject is infectious, and her biting wit makes you laugh aloud even as you mourn what could've been had Lincoln opted not to go to Ford's Theatre that night, had Guiteau gotten help for his mental illness, had Czolgosz not learned of the assassination of the Italian king by an anarchist in 1900.

Despite these grim events, this book is light, joyful, and incredibly hopeful. It's the sort of book you read on the subway, only to get odd looks from your fellow passengers because you're laughing aloud way too hard. It's also the sort of book that will make you want to read more about these tragic presidents and their strange, egotistical, and occasionally tragic assassins.

This book taught me to love presidential history and be fascinated by it, to read anything I could get my hands on about it, and to remember that, yes, America has a complex, violent, and astonishing past. But when told by the right author, it's never boring.

Kerry Fiallo is a New York native and copywriter at Simon & Schuster.