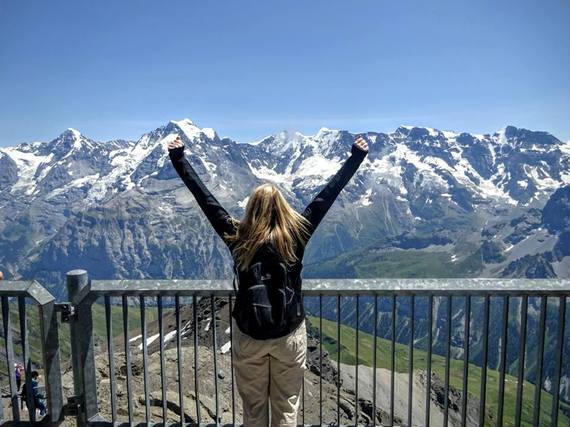 You know those moments as a parent when you realize you were dead wrong? I recently had one with my 24-year-old daughter when she announced that she would spend the summer backpacking through Europe. She wasn't going with friends, didn't know a soul on the trip. She would fly into Munich and spend 35 days with a bunch of 20-somethings traveling from hostel to hostel, city to city, exploring the great unknown. She would do this entirely out of a backpack. And her trip would include any number of extreme sports.

Her dad and I told her she was nuts. The first words out of my mouth were, "Have you not seen Taken?! Neither dad nor I have a 'particular set of skills.'" We begged her to take anyone -- even a male friend -- if it meant she wouldn't be traveling alone. I offered to spend any amount of money to accompany her and do anything she wanted to do. Her response? "That's not the kind of trip I want to take, Mom." I suggested she invite her brother, but she reminded me that he wasn't on a teacher's schedule like she was. There was simply no talking her out of this trip. When your kid is 24, you can't say no anymore. All you can do is give advice and pray.

The situation only felt worse when I told my parent friends about her plans. They were visibly stricken when I mentioned she was traveling to Europe alone. Let's just say that seeking comfort in other parents' sympathies drew the opposite reaction. My friends looked at me like I was a horrible mother for not stopping her. They asked questions like, "How will she find a stranger who wants to go rock climbing and, oh, by the way, isn't on the FBI's 10 Most Wanted List?" What could I say? I simply repeated what became my mantra: I don't like it either, but she's 24 and I can't tell her what to do.

The moment finally came when I dropped her at the airport. As I watched her walk into the terminal carrying nothing but a backpack, I remembered the times when we traveled as a family and her bag was the heaviest of them all. As a teen, she insisted on packing her specific shampoo and favorite toiletries, a pillow pet, her spray bottle fan, myriad books, and a white noise machine. Now here she was with a few interchangeable tops and bottoms, a single pair of hiking shoes, a mini microfiber towel, a camera, and a Kindle, all neatly arranged in a backpack that would have to meet her needs for the next five weeks.

Her one concession to all my concerns (which I was sure to remind her of as we said our goodbyes) was a promise to text every day to let me know she was alive and well. On that first morning, I jumped out of bed to check my phone for her update, and that routine continued. But as day folded into day, I breathed a little easier. Not only was she safe, but she had found easy friends, the hostels were comfortable and welcoming, and the vistas were breathtaking.

It was like watching a fantastic movie, with my daughter as the star.

There she was in Austria biking with her fellow hostel dwellers, her smile as wide as the mountain path she had traversed. She stood tall in front of an old clock tower in Munich, smiled reverently from the roof of the Vatican, perched before gondolas in Venice, meandered along crayon-colored cliffside homes in Cinque Terre, sank her toes in the sand on the Italian coast, kayaked in Lake Como, and road the glacier rapids in Switzerland. She hang-glided, hiked the Alps, and parasailed, all bucket list items, all conquered.

And those were just the big adventures. The everyday life will likely comprise her fondest memories. She met people from all over the world, turned strangers into friends, taught Europeans how to make s'mores, and found solace in wandering foreign streets pleasantly alone. While she is cautious and aware by nature, she never felt afraid or uncomfortable. Each picture she took, country after country, showed her not with her practiced "picture taking smile," but beaming with a pure inner joy most of us rarely have the opportunity to feel.

Some of that joy was rooted in a man, as it often is. They met on her second day in Europe when he found himself at the wrong hostel with the right girl. Their first date happened later in Rome, where they reunited at the Colosseum and had dinner and wine at a romantic café. He followed her through the countryside and then on to Nice, where they walked hand-in-hand on the beach listening to Russian music under starlit skies. It hardly seems real, but it happened, and she'll replay that memory forever, rely on it when life seems mundane and uneventful. She'll forever remember the romance she had at 24 with the Ukrainian New Yorker who got lost in Austria and found a girl he was inexplicably drawn to. It's the stuff novels and movies are made of.

The point is, her dad and I were wrong. We should have seen our daughter for what she is -- a grown up, responsible, level-headed woman who thinks before she acts. We did everything we could to talk her out of this trip, and I'm here to tell you, I would never again try to deprive my daughter of the joy, the experiences, the life she lived on this journey. She refused to let our fears dictate hers. She knew exactly what she was capable of, and she did it with aplomb. She proved us all wrong and had an experience the rest of us can only wistfully imagine.

Sometimes we're wrong, and I, for one, have never been happier about it.

Rebecca Deurlein is the author of Teenagers 101, available now in time for the new school year. Her blog, A Teacher's Guide to Understanding Teachers, and be found here. You can also find her on Twitter and Facebook.