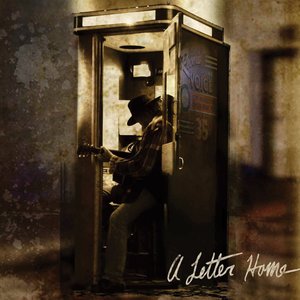 A Conversation with Neil Young

Mike Ragogna: Neil, your new album A Letter Home, might be the most personal album of your career. You recorded singer-songwriter classics that are dear to you with an old Voice-o-Graph recording booth that was popular during the forties and fifties. What inspired you to take this approach?

Neil Young: Well, I was visiting with my friend Jack [White] in Nashville and we were using his studio for a Willie Nelson tribute that we did for Willie's birthday. Jack and I share a love of gizmos. We like mechanical things. So Jack was showing me some of his old gizmos and at the same time he was recording. People were coming and recording on the booth because it's like from the state fair or something so people used to make records and send them to their friends, you'd put in a quarter or whatever and be able to record a record and send it. It was kind of like the email and voice mail of the day. So he was showing me this and people were coming in and making records, and the limit of the duration is two minutes and twenty seconds. I was working with it, and I put something down on it, just a little bit of song that I'd written or something. I listened to it back and I said, "Okay...all right! Why don't I make an album on this thing?" He said, "Yeah, we can make an album!" I said, "Give me a little time to think of what it is," but I'd also been working in the back of my mind on a roots project--"roots" being, "Where did I come from? What made me who I am? What music has effected me over the years? What feelings have I gotten from music that really made a difference? Where did the music that I love come from? What did it sound like?"

As all of this was percolating in the back of my mind, Jack was recording on his little machine that he has and I thought, "Ah, this all comes together for me." So that's when the idea came to do the album. It took me three months to locate the right songs and learn them and transcribe the lyrics. So I would find the lyrics somewhere and I would copy them out by hand, because that's the way I remember things really well, as well as I do remember things, which is not that well, but that's another subject for another time, probably the medical part of Huffington Post. But anyway, I did that and I created this record just singing those songs. I had a list of songs and I went in with Jack three months later after I had compiled the right list of songs that I really believed in and I practiced and I learned the chords really got used to what the little intricacies of the songs were. There are some great songwriters here. It's more of a tribute to songwriting and to those folks that wrote those songs and to the art of singing a song and having it be what it is instead of it being a big production. So that's kind of what it is.

MR: You cover a couple of Willie Nelson songs, Gordon Lightfoot songs, a Tim Hardin song... These are all songs that resonated with you strongly, right?

NY: Oh yeah, that's the only reason I do them. They have to resonate with me personally in my life and what I believe and how I feel, on a personal level and on world levels. "On The Road Again" is kind of a world-level song for me. It's like, "Yes, I love this, this is how I feel, I'm that kind of guy, I AM that guy." Then there are other songs in there that are extremely personal and loving songs that are about relationships and my life at the time. I was living those songs, so they all work for me.

MR: There are songs on this album that seem to relate to other periods of your life or even other songs you recorded. For instance, "Needle Of Death," "Needle And The Damage Done," of course, comes to mind.

NY: Yeah, and "Ambulance Blues," which is another song that I wrote is based on Bert Jansch's "Needle Of Death," it's almost the same chords, you can see how I copped all the changes, I was so influenced by him I basically rewrote his song with a different theme. That's the folk process, which is something that some people are still into. I am, so it means a lot to me.

MR: Over the years, when you wrote for your various albums, were you inspired by some of these songs?

NY: Oh yeah. These songs meant a lot to me, the feelings in these songs, more than maybe the style--with the exception of Bob [Dylan]'s songs, of course, which I was extremely influenced by. I was mostly influenced by the sentiments in the songs and by the inner feelings in songs and the way they resonated with me and my own life and how I felt, the oneness with the writers of these songs.

MR: I know your mother passed and this is basically a "letter" to her. If this letter had been sent home a little earlier, what do you think the reply would have been?

NY: Oh, she would've liked it. She would've loved it, just the fact that I was communicating and it was for her. I didn't plan that thing. Jack told me, "You know, they used to send messages on these records. It wasn't always just music, there'd be a message." Rather than write a letter, because maybe some people couldn't write, they used these recordings to say what they thought and send a message. So that's how that worked.

MR: You show the essence of the song with these recordings, it doesn't rely on technology or production values for its level of quality. It interesting how popular music has progressed in the exact opposite direction, relying more on technology than ever before.

NY: I have deviated now and then on different projects, but for me, it's mostly about the feeling and the performance. If you're talking about the performance of the song and getting the feeling out, there's no reason to even listen to it after you're done if you felt it when you sang it. If I feel it when I sing it and I go, "I did it, that's it, that's how I feel, that's what I did and that's what the song meant to me, I got the message out," then I don't even have to hear it. I don't care what it sounds like because I'll never be able to do it as good as that again, so it doesn't matter. I just move on. The whole idea of a singer-songwriter singing the song from the heart, singing a song that means something to them and actually singing a song that's good enough to stand up on its own without any accoutrements, without any production, without any machines supporting it, without any formulated beats, without any computer making sure that all the rhythms are justified so that everything is perfect, you take all those things away and put a great song there with a great performance, even if it's not by the greatest vocalists in the world or the greatest guitar player or instrumentalist in the world, if that person is believing what they're singing and it's truly there and the song is great and the song is written from a real place, then the song's going to resonate with anybody who wants to listen to it.

MR: Neil, it's also interesting that your PONO system celebrates the audiophile approach, the other extreme of what you did with this project.

NY: Well, it does. It celebrates something else. This project, released through PONO, will be clearer than anything anyone's heard of this project. Even if it's the vinyl version of this project where you can hear the clicks and pops and surface noise, the sound of it will be more. In the digital realm, copying this song and playing it back on PONO will be clearer than anything anyone's ever heard, with more depth than ever before and with more of the emotions of the song revealed than they got the first time because there's just more there. When you're dealing with feelings and you're dealing with the ears, which are clearly the window to the soul--there's nothing like the ears, everything else is pretty well surface, although smelling is good, but visualization is mostly just a temporary rush. Feeling from the soul, coming in through the ears, that's what PONO's all about. It reveals everything that the song has to offer, everything that the original recording of the song contains is revealed and PONO will be a revolution for music as far as being able to actually enjoy it. It's for music lovers. It's for people who really enjoy listening to music because finally, they will get what they deserve. It will a revolution for those people.

MR: You're still very passionate about the PONO.

NY: Well, I've put a great deal of my time into it because I feel that the art of the recorded sound is the history of music and everything needs to be preserved in a way that it's worthy of.

MR: Do you think there will be more letters home? Are you intrigued to do more of these kinds of projects?

NY: You know, the future's a huge, gigantic place. I have no idea what's going on out there, I'm just going to walk into it and see what happens.

MR: Well you are the master of the creative process. Do you have any advice for people who want to pursue those kinds of paths?

NY: They just have to do what they feel like doing and not listen to anybody else.

MR: Is there any guidance that these future artists might need?

NY: Inner guidance. Listen to yourself. Everybody's got their own.

MR: Cool. Is there anything in your near future that we also should be excited about?