When I first heard your brilliant new song "Lazarus" -- before the video came out -- I thought I knew what was going on. I felt certain you were about to do what Bob Dylan did with Time Out of Mind in 1997: release a contemplative masterpiece with a strong death theme, that would breathe new life into your artistic career. It made perfect sense too. The story of Lazarus is such a dramatic one, with so many creative possibilities. It seemed the perfect backdrop for a new Bowie tour, and that was really exciting. Unfortunately, I'd forgotten something my father used to say: it's the people you think you know best who'll surprise you the most.

I sure did think I knew you pretty well. I was a high school misfit in the early 80s when I first discovered you, and everything got better after that. The experience started with pictures in magazines, songs on the radio, and two of your albums -- The Man Who Sold the World and Station to Station -- which I bought at a used record store in Boston. I'm not sure why I selected those particular records, when many others were also available. Maybe the vinyl had the fewest scratches; maybe I liked the pictures on the jackets; maybe they were just the cheapest ones in the store. In any case, they became the soundtrack of my life for months to come.

I didn't understand them in any context though; they were simply two examples of Bowie music that'd dropped into my life, like Thomas Jerome Newton in The Man Who Fell to Earth. And like Mr. Newton, they seemed alien at first, but once I'd listened to them a few times, your humanity came shining through. I heard it in the romance of "Wild is the Wind," in the dark theatricality of "All the Madmen," in the incomprehensible-but-oh-so-catchy "Station to Station."

I spent hours on the orange shag carpet in my living room, listening to you with my eyes closed. My parents didn't get it, but I think they were glad I wasn't out roaming the streets, looking for trouble.

You became a friend. A secret, sexy, adventurous, sincere, questioning friend. The perfect blend of larger-than-life and regular dude. You liked playing dress-up, but not all the time. People went nuts over your fabulous clothes and makeup, but your legs were pale and Irish-looking, like mine. You were known as a wildly sexual performer, but your tender love songs melted my heart. Your eyes were two different colors, just like my grandfather's.

Then I went off to college and Let's Dance came out. And I'll be honest: that one jarred me. It wasn't that I didn't like the songs -- although I wasn't crazy about most of them -- it was the fact that they were played on pop radio that bugged the crap out of me. A pop star? No. Not you. You were too good for that.

But since I had no say in your career decisions, I did my best to see the positive side of the pop Bowie thing. You did look gorgeous with your new blond hairdo, and you seemed to smile more than in the past. You seemed happy. Maybe that's why I went through a phase where I tried to look like you. As you'll see from the photo I've included, I went to the hairdresser in August of '83 and asked to have my long, blond hair trimmed into a Bowie cut. 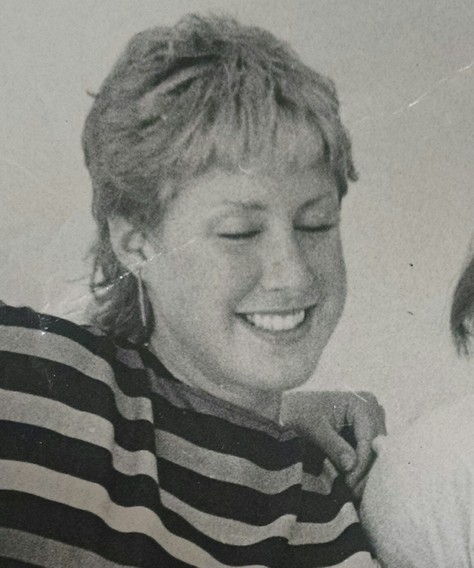 Then the greatest thing happened: I heard that the Serious Moonlight tour was coming to Foxboro, Massachusetts -- about half an hour from where I went to school -- and immediately bought a ticket. A general admission ticket. Meaning that if I arrived early enough, I could be in the front row.

The night before the concert, I didn't sleep. I couldn't believe I'd actually be in your presence, and couldn't stop trying to figure out how to meet you. Would it be possible to get backstage? Would I be able to slip you a note? It was all too much for my head to handle, and I'm embarrassed to say that when I got to the show -- in a van with some friends and acquaintances -- I pretty much lost control of myself.

Fueled by some primal instinct -- and beer too -- I charged into the audience and somehow wormed my way to the very front. Just like in my fantasies, but different. Thinking back on that day now, I'm surprised I wasn't killed, and still feel guilty about pressing ahead, forcing other fans to step aside for me. The bruises I sustained were slow to heal, but at the time, I felt no pain. In my mind, I was fulfilling my life's destination, but to everyone else, I was a crazed, obnoxious girl, acting rabid and dangerous. 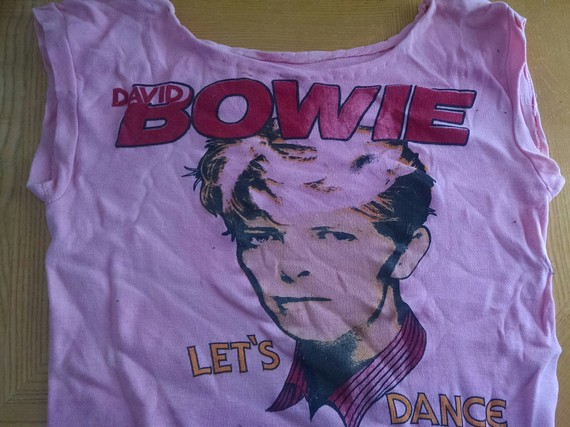 Needless to say, you and I didn't meet that day. There was a moment, though, when I truly believed you looked down and smiled directly at me. In fact, if I close my eyes now, I can still see your infectious smile, your glowing skin, those beautiful dimples. It meant the world to me, even though I now realize you were probably just smiling into a sea of bright lights and screaming faces.

I calmed down after that. Eventually came to my senses. But I never stopped loving you, exploring your music, or hoping to someday meet you for real. I got to know Ziggy -- or at least tried to understand him -- and most of your other work. If I had to pick a favorite album, I guess it'd be Hunky Dory, but why pick favorites? In their own way, they're all genius, all special, all distinctly, magnificently Bowie. And how excited was I when my daughter came home from summer camp to tell me how much she'd enjoyed the movie Labyrynth?

But now, I guess we need to talk about Blackstar. Oh, David. Nobody got it on your birthday, when you released that stellar -- no pun intended -- record. Even the two accompanying videos didn't do the trick. Your physical appearance and those eye bandages with the buttons were disturbing as hell, but you were Bowie, after all. It was makeup, right? Makeup and lighting. You did it better than anyone, and you'd been writing songs about death since the Major Tom days. You knew how to give your fans a good show.

And you did. At the end of the "Lazarus" video, when you crawled into that closet, we all expected the next one to be a little more upbeat. We wanted the curtain to rise on that that smile, that dimpled assurance that it was all just another stunning performance. You were playing Lazarus, after all.

But like my dad said, it's the ones you think you know best....

So now you're a Blackstar. Time has changed you; we can't trace you now. On the other hand, you did so much to change the world for the better. Just ask any high school misfit.

Godspeed, David. I'm hanging onto the hope that we can still meet some day.