I tell my son I love him all the time. I also tell him that I'm very proud of him. One thing I don't tell him every day is how much being his mother has changed the way I see the world. So I wrote this letter.

Remember when we went on magic carpet rides and sang "A Whole New World" in the car? What I didn't realize then is that you truly were showing me a whole new world.

Your childhood world was full of princesses, ponies, dolls, flying horses, unicorns and mermaids. This was a world where anyone could be anything. Children could play with who and what they liked, because in this world toys and play had no gender. Purple and pink were the predominant colors, and you claimed them as your own, because in this world colors had no gender.

Of course, you had to live in the real world and this was sometimes very hard. As you got older, there was more and more pressure to change. You made some adjustments and hid parts of yourself from the world. You went through loneliness and depression, but you managed to keep the core of yourself in tact. Your beautiful spirit was, and is, strong. 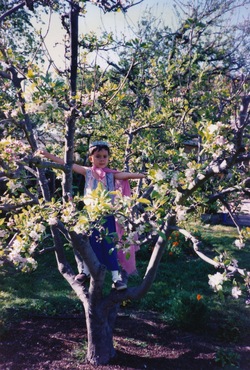 Then you grew up and met your first boyfriend. You showed me a world where love is not limited by gender. And the day that marriage equality became the law of the land, we shared a moment together taking stock of this huge step forward. I cried because you were being recognized as a human being who was worthy of equal rights.

During your last visit home, I watched you and one of your best friends painting your nails with sparkles, and I saw the new world you showed me as a child.

It's a world where children have the freedom to play and explore without being pushed into gender boxes. There are no gender boxes, just freedom to be. Everyone is loved and no one is bullied for being different.

It's a world where every child is loved unconditionally for who they are. No child is homeless, abused or shamed because they are LGBTQ. No one is ashamed of having a gay or transgender child because everyone is accepted and celebrated.

It's a world where we all recognize people with many gender identities, sexual orientations and gender expressions. Gender diversity is not just accepted, but also valued and celebrated. Nobody fears for their life or has to watch their back because someone disapproves of their gender identity or expression. Everyone can walk in the world, be fully self expressed and feel safe.

In this world, everyone can dream big dreams that aren't constricted by a predetermined script. People of all genders can be strong and smart. Nobody feels that their worth hinges upon looking pretty. In this world, people of all genders can be nurturing and show their emotions. Nobody is pressured to put on a mask of bravado or commit acts of violence to prove their masculinity.

A whole new world
A new fantastic point of view
No one to tell us no or where to go
Or say we're only dreaming
(from Aladdin, Lyrics by Tim Rice)

This post was inspired by A Note to my Kid, a project of PFLAG National.

Thanks to Danny Moreno for permission to share and for editing assistance.

Readers, check out my website for resources to support families, or my videos to learn about my process of becoming an out proud mom.