Dear Mom On The Street Who Stared At My Son,

You didn't notice me watching you staring at my son, but oh, I watched. You were headed toward us on the street, walking next to your husband, with a child about five years old trotting behind you. You were impeccably dressed, a shirt with red and white horizontal stripes tucked neatly into tan chinos, dark shoulder-length hair perfectly in place. My Max was ambling down the street and by that I mean, he was moving fast and when he does that he sways side to side.

He'd just had chocolate ice-cream, so he was very happy. He was also psyched to be out on a warm spring night with his mom and sister, cruising around town. He wore a navy cotton bandana bib that was wet; he's been drooling more than usual lately. Cerebral palsy messes with your muscles, including your oral-motor ones.

You fixed your eyes on my son and did not take them off.

It wasn't just a stare, it was a stare-glare. You seemed disturbed by the sight of him, the sight of a child. My child.

The curious stare: What is up with that boy? I can tell he has special needs, but I'm not sure what. Autism?
The pity stare: Oh, that poor, poor, boy with special needs. How sad. Awwww.
The exasperated stare: Why is that boy carrying on in a restaurant? His parents should not take him out if he's going to act like that. What a brat.

These stares, I understand, as much as I'd like to think that people are looking because Max is so cute (and has really good hair). But the stare-glare, I don't get. How can you be annoyed by how a child looks? Yeah, he's not exactly like other kids who walk straight and who do not drool. But how shallow--no, how vile--it is to go by appearances. Or to think that it is OK to blatantly stare at a child.

We passed each other in about five seconds. I dared you to look at me, so I could give you a look that said, "I see you staring like that, what's wrong with you?"

Max did not notice. He is unaware of stares, and I am fine with that. I do not think ignorance is necessarily bliss, especially when you have a child with intellectual disability, but I will gladly take this oblivion until the day comes when Max can introduce himself to a starer or, as the case may be, give them one right back.

Me, I notice the stare-glares every single time, and a mix of emotions runs through me: Fury. Distress. Heartache for my son. And confusion: What exactly is the problem here?

I typically see the stare-glare coming from elderly adults, who I figure grew up at a time when there was less acceptance of differences, a time when people with disabilities were shuttered away in institutions. But it's particularly unsettling to get the stare-glare from a mother around my age. I would think you would know better. It's a shock to my system to literally see the prejudice that exists toward people with disabilities--and that some people do not care to hide it.

I was tempted to turn around and shout, "His name is MAX!" But that wouldn't have done any good and Max would have just grinned at you and his sister would have been embarrassed, because she's at that stage where I've started mom-mortifying her. So I just kept walking.

If I'm in a park or at a party with Max or some other social setting and I notice a mom or kid staring curiously, I can engage them in conversation. (Though it would be awesome if you just said "Hi!" or encouraged your child to, or let them ask my son a question.) Reaching out to people who seem to want to approach Max but aren't sure how is a way to help them see the kid behind the disability. But there's not much I can do about drive-by stare-glares, and it's frustrating.

You likely won't read this, but perhaps others like you will. Consider:

• My child may have visible differences. He may sound different than your child, and he may learn in different ways. But at heart he is still a kid. Just like yours he likes to laugh, play, love. He's not as different as you might think.

• Think about the messages you will send to your child if you continue to stare-glare at children with disabilities. Maybe acceptance doesn't matter to you, but you will be raising one narrow-minded kid. It will limit his experiences in this world.

• My child may not notice your stares now, but someday, he might. And that will make them even more cruel. Kids with disabilities have a hard time feeling included--how much more so if people look at them as if they are aliens.

• My kid has been through a lot in his young life. When he walks down a street, he is defying the doctors at the NICU who said he might not walk and who weren't sure he would live. He has incredible strength. Adults who shoot him nasty looks are weak.

• No matter what: He is just a child. He deserves to walk down the street with whatever gait he has and not incur a stare-glare. He deserves respect. 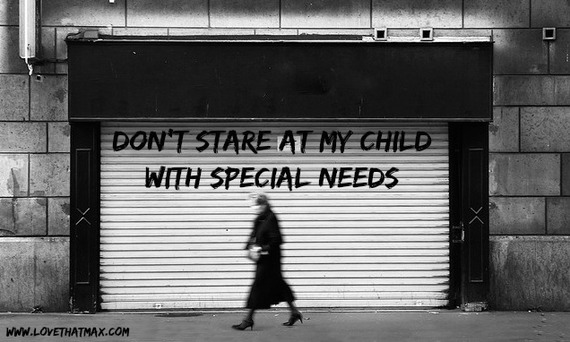