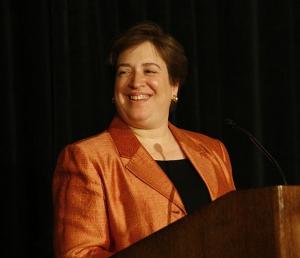 Today President Obama announced that Elena Kagan will be his nomination to replace Justice Stevens on the Supreme Court. For those on the left, the Supreme Court nominations are the single most important part of Obama's presidency. They will outlast any legislative measures he manages to push through the embattled house. But Kagan stumps most of us. What exactly are we supposed to think about the newest Justice?

There are a few important points that need to be made. First, Kagan is likely pro-choice. She has stated before that she supports taxpayer funded abortion clinics. And, auspiciously, pro-life groups are up-in-arms about her nomination.

Second, Kagan has shown limited support for gay rights. As Dean of Harvard Law School, she, along with many other law deans, opposed military recruitment on campus because of their policy of LGBT exclusion. However, gay rights advocates might be nervous about the rumors circulating that Kagan is a lesbian. Lesbian or not, the "is she or isn't she" controversy was handled so badly, neither Kagan, nor the Obama administration seems very comfortable with the question of Kagan's sexuality. This makes many wonder if she can really be all that liberal when it comes to real questions of equality like the issue of federally recognized gay marriage.

It might be that this is enough. The hot button court issues are likely to be abortion and gay rights in the future and we certainly don't want to lose ground on either of those two points.
But the rest of the Kagan analysis is more complicated.

First, she is an advocate for increased deference to Presidential power. In her much discussed article on Presidential influence over agency process, Kagan argues that judges should acknowledge in their judicial review of agency decisions when the President has weighed in on an agency decision and, by doing so, taken responsibility for the agency's action. In real terms this means that Kagan believes even if an agency acts in a way that seems unfair or unreasonable, if the President approves the decision, courts should consider backing off.

This is worrisome for many reasons. But you only need to remember the kind of Presidential power wielded by George Bush to start getting nervous about a Kagan-style of judicial review.

Second, we just don't know much about how she feels about other important issues like ramped up criminal laws, Miranda rights for terror suspects (now under threat from Holder), and corporation rights which will be the subject of much litigation following the Citizens United decision. Sure, a 2005 letter encouraging protections for non-citizen terror suspects signed by Kagan, among others, has surfaced. But the letter certainly doesn't accord with the later support for Presidential authority Kagan espoused.

In contrast, Diane Wood, another court frontrunner, has a long judicial history to examine. She is a strong liberal proponent who has written decisions protecting the rights of non-citizen detainees, religious freedom, and abortion providers, among others. She is an eloquent writer and staunch defender of minority groups. She would have been a superb and honorable replacement for Justice Stevens.

So, at the end of the day, what do we know? We know that Kagan is a centrist without much of a record. We know she might be liberal on the hot button social issues, but also that she might find in favor of conservatives on other important aspects of America's future.

Most importantly, we know that we elected Obama so that he could leave a powerful liberal legacy on the Supreme Court after his middle-of-the-road presidency was finished. We know that he let us down.