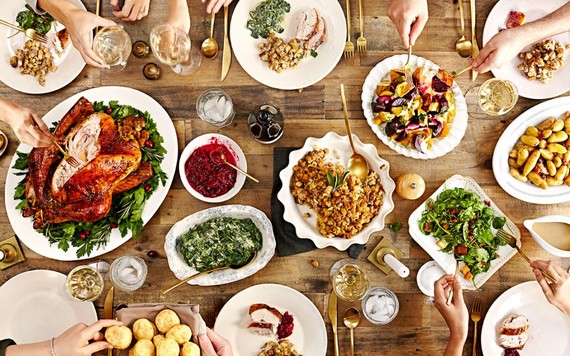 Twitter will tell you to be a savage. Come to the function with enough clapbacks for the dinner table at Thanksgiving and the line on Black Friday. Snapchat will tell you to vent about the situation to your followers. Facebook will tell you to keep a smile on your face and post the photo where you look the least irritated. We all have options when it comes to the dreaded college questions of Thanksgiving, from simple questions like "What's your major?" to those joint questions that basically mean, "What the hell are you going to do with your life when these four years are up?" For liberal arts majors, these questions can be especially pressing. We expect intrusive college questions every year, but somehow each year we're more unprepared to answer than the last. Here's how to handle every liberal arts' major's least part of Thanksgiving - and make these questions a little less likely in the future.

First of all, have goals on deck. "So, what are you going to do with that?" is probably the most common question relatives ask liberal arts majors, and can easily be the most unsettling - especially if you really don't know. However, even when we say we have no idea what we want to do with our major, we usually have some idea and something (or someone) else is just encouraging us that it's not possible. Say your goals anyway, no matter how lofty they are. If you tell your relatives that you have some idea of what you want to do with your major, it shows them that you take your major seriously even if they don't. Include company names when possible. The more specific your plans sound, the harder your relatives will find it to shake them. Also, tone says a lot. Even if you're completely unsure about a future in museum curating, animation, or philosophy, it's important that you sound hopeful. After all, in interrogating you on your major, your relatives are trying to diminish your hope. Don't let them.

Beyond keeping a hopeful demeanor, be sure to bring up your successes related to your major if or when applicable - yes, it's time to be a cocky artist. Silencing shade-throwing can be a difficult task. As easy as Twitter makes it seem, it's actually pretty intimidating to bring up your uncle's third divorce or your aunt's alopecia between entrees. The best, and safest way, to clap back is to silence your haters with some impressive facts. Put your hard work on the table. If you're currently interning or did an internship in the past related to your major, bring it up. If your GPA increased, tell your relatives. If you've been racking up As and Bs all semester, talk about it. We can be so quick to wallow in our insecurity about our future that we forget the times when we actually did something right. If you're barely into college or if you simply don't have a resume that's loaded with internships or good grades, let your relatives know that you do plan on achieving these things. Bring up internships or jobs that you're thinking of applying to for the spring or summer. You can also bring up individual grades on papers, exams, or projects.

Your relatives may make it seem like you're the crazy one for pursuing a degree in history, creative writing, or sociology, when, in fact, they're just crazy for thinking that you're going to change. If you consider the reality that you're not fond of majors beyond the liberal arts - that you simply don't want to study mechanical engineering or neuroscience or information technology - you're less likely to be offended when a family member questions you on them. Think of it as the equivalent of someone consistently asking you why you won't go back to your ex. Now, who needs to get their head together?

When the time comes to have a seat at the table, these ideas might fly over your head. You may want to just enter petty territory instead. That's understandable, and there's a way to do it right. If bringing up your successes and goals doesn't seem to be getting anywhere with your relatives, call their bluff. Your godmother that's been hounding you for your fashion merchandising major? Probably rocking new clothes to please Grandma. That cousin that does nothing but talk crap about your film major? Probably going to ask for your Netflix password later. That uncle who thinks your music degree is too lofty? Probably has Spotify. Pointing out this hypocrisy is important not just for your wellbeing but for the entire discourse on the "usefulness" of the liberal arts. It's time to stop interrogating students for pursuing degrees on subjects that have just as much impact on our lives as others. As for us students, it's time for us to start accepting ourselves for what we enjoy, and focus on mastering it.