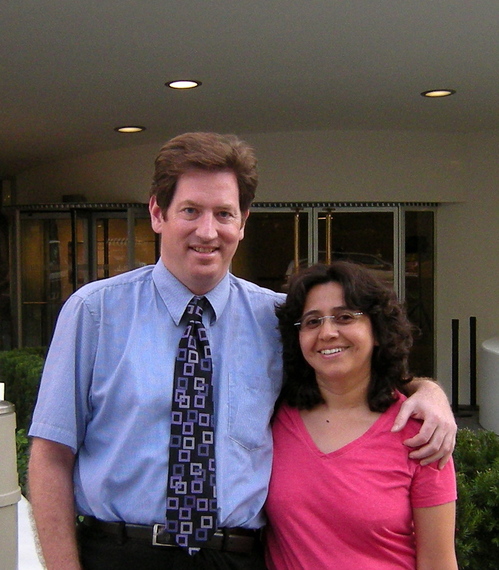 Husband and wife producer team on a humanizing media quest

This year marks the five-year anniversary of Public Voice Salon, a TV show I co-created with my wife that seeks to revive the lost art of human conversation. As an English professor deeply concerned with nurturing humane dialogue, building on the work of such great dialogic thinkers as Socrates, Martin Buber, and Carl Rogers, I've achieved amazing results in helping my students "de-ipod" and enjoy rich, stimulating, humanizing conversations -- many for the first time in their lives. I'll never forget one of my students in Newark's Essex County College, for example, who told me that before my class she never realized she could have a conversation with a stranger.

Given the widespread alienation in today's society, and the erosion of conversation among adults that weakens community life and undermines democracy, in 2010 I decided it was time to take my liberating "dialogic teaching show" on the road (so to speak) by creating a space for authentic dialogue in television land. Naturally, by authentic dialogue I don't mean the kind of shallow, point-scoring, "market tested" pseudo conversation that prevails on our degraded airwaves today; with the exception of Charlie Rose, Tavis Smiley, and my hero Bill Moyers -- who just retired. No. I mean the kind of free flowing, spontaneous, creative conversations that enchant, surprise, and sometimes spark epiphanies and transformations. The type of meaningful, possibility infused discourse you find in quality academic spaces, at social justice gatherings, and at the best dinner parties. More like David Susskind and Dick Cavett territory -- the shows I grew up watching in the fabulous 1970s.

So, over a conversation, I proposed to my scientist wife Claudia Canasto (who hails from a magic little town outside Bogota, Colombia) that we create our own TV show and was thrilled when she said yes! The power of love is also something our show educates about. On most of our episodes, at some point I like to mention that without the loving encouragement of my darling wife -- who believes in my crazy dreams as much as me! -- this TV show would not be possible. My interest in love, in addition to personal, also has philosophical and political overtones. I've been inspired by the work of Leo Buscaglia, for example, America's first great love educator, who, during one of his many Tonight Show appearances, Johnny Carson displayed a touching embarrassment when this demonstrative Italian-American reached out to hug him! I've also been influenced by Erich Fromm's masterpiece The Art of Loving (1956), and bell hooks' All About Love: New Visions (2000). On the show, I often mention one of my favorite quotes from Brazilian philosopher Paulo Freire:

"We need to teach for a world in which It's easier to love."

Our earliest shows were filmed in a used bookstore called Symposia in Hoboken, NJ. Billed as "democratic citizen roundtables," we set up a cozy conversation circle in the center of this charming, working bookstore, and let folks speak openly about the political, social, and cultural issues on their mind. What I love most about these episodes is their radically open spirit of what John Dewey called "community in the making"; so different from anything I've ever seen on television. You can even see customers browsing inside the store, wandering by randomly, some of whom I persuaded to spontaneously join our panel; as your eyes also delight in the vibrant sidewalk life outside the bookstore's window onto Hoboken's bustling Washington Street: a pedestrian's dream, voted one of the top ten streets in America.

Significantly, these shows at Symposia bookstore were also social happenings or parties. To reinforce our community-building mission, and help repair the alienation and loneliness so rampant today, we gathered for wine, cheese and cookies both before and after the tapings to encourage authentic social interactions.

In addition to community building, we like to "offer the microphone" to intellectuals, writers, and artists whose work has the power to arouse the social imagination and help us ponder a better world that might be. Our eclectic mix of notable guests include the economist Richard Wolff (author of Democracy at Work), political theater pioneer Judith Malina, historian Thomas Bender -- who wrote the definitive intellectual history of NYC (New York Intellect), and who told me I was his best interviewer! -- Edith Kurzweil, Partisan Review editor and a 2003 National Humanities Medal winner, indie film producer Dolly Hall (High Art, 54) -- who we filmed on her scenic Upper East Side rooftop -- political thinker Stephen Eric Bronner (who coined the term "cosmopolitan sensibility"), experimental dancer Paul Langland, film historian Foster Hirsch -- the two of us aglow in the magic light of Greta Garbo's lamp! -- two prominent Manhattan psychotherapists (Harriet Fraad and Debbie Joffie Ellis)... for me, it was like free therapy!... and Brooklyn born comedian Pat Cooper, one of the funniest people on our planet.

We also featured the man who, in 1950, invented the very first TV talk show: Joe Franklin. An icon of American entertainment, the "King of Nostalgia" (and expert on 20th century American pop culture) even gave us his blessings on the air -- something we'll always treasure. At a time when cultural memory itself is under assault by an increasingly fast-paced, digitized and corporatized society, the simple "Memory Lane" concept Joe pioneered (creating space for stories too) might be worth revisiting for its humanizing qualities.

Although she never appeared on our show, the work of renowned education philosopher Maxine Greene -- a Columbia professor who helped found the Lincoln Center Institute for Arts in Education, and whose famed Upper East Side apartment Salons I often attended -- continues to be a driving force behind our TV show. Maxine, who championed the educative potential of the various arts, believed in the power of community and loved to say that imagination helps us to "think of things as if they could be otherwise." Now isn't that a lovely thought! My connection with Maxine, who I consider myself a protégé of, gives our show its deeper pedagogical meaning.

In fact, if you look at our past episodes on YouTube -- from which people can get a better education than in most colleges today, considering academia's movement away from the liberal arts and critical thinking toward a banal "training for work" mentality -- you'll see I make multiple references to some of the greatest philosophical and educational thinkers of our time: including, besides Maxine, John Dewey, Jerome Bruner, Jurgen Habermas, Mikhail Bakhtin, Herbert Marcuse, Carl Rogers, Cornel West, Robert Putnam, and Stanley Aronowitz. It might be, and I'm not bragging here but simply stating a possibility, that we are the most overtly pedagogical show on TV since Fred Rogers -- who happened to be, wouldn't you know it, a lifelong friend of my grandfather's cousin J. Bruce Bredin.

Besides our trenchant critiques of today's education crisis, we also focus like a laser beam on the problem of money in politics and the ecological destruction that threatens the very survival of our planet. While Bill Moyers featured Jill Stein, the Green party candidate for president as a guest on his show, we were proud to broadcast Salons featuring Green Party candidates for New York State Governor (Howie Hawkins), Senate (Colia Clark) and NYC mayor Tony Gronowicz. Once, when I played one of these shows for my college students, they were pleasantly surprised (and filled with hope) to learn that a political party dedicated 100 percent to solving the climate crisis actually exists.

Moving forward, we're eager to host more Salons and interviews not only in the NYC area, but across America -- in a democracy strengthening barnstorming tour! -- and eventually in Europe. If you know of any thinkers, writers, activists, educators or artists whose work has the capacity to enrich the public conversation (including you dear reader!), toward the creation of a more just and caring social order, please let us know.