After 84 years, my father-in-law has finally learned to live in the moment. No longer thinking ahead about ways to enjoy his remaining time, but also no longer able to think back on his full life.

Not just conscious of his own mortality, he is hyper-aware that he's losing his grasp on reality. It is a difficult realization for someone who spent his career as a research microbiologist constantly honing his sharp-edged mind by seeking new discoveries.

Dad was diagnosed with age-related dementia five years ago. At the time, he joked he wasn't getting older, he was just getting dumber. Today, he cannot recall the joke he just told us a minute ago -- the same one he told us five minutes ago, 10 minutes ago, 1 hour ago or earlier that morning. You get the idea.

His condition is not so different from the estimated 14% of Americans over 70 who suffer from some form of dementia including Alzheimer's disease.

But what is different, I believe is the tenuous but tenacious grasp he holds on the very moment he is aware. In that moment his scientist brain retrieves the most relevant data it can in every situation. And if you listen close, his timeworn responses are timeless lessons.

Perhaps we are affording more meaning than he intends, but to me, it seems as if his tired brain is working to transmit its most vital files on record -- those on life -- before it shuts down for good.

In his simple words, I hear his desire to pass on the most important lessons of his life. There's no chance you will miss them. He repeats himself incessantly. But I tell myself and my children we must listen for the message.

In one moment, he offers gratitude to God for the blessings of his family. A second later, he expresses regrets about sometimes failing his family. Then he wanders off, distracted by the two belts he's put on or wondering aloud about whether he's eaten.

But he wastes not a moment when he's thinking clearly. 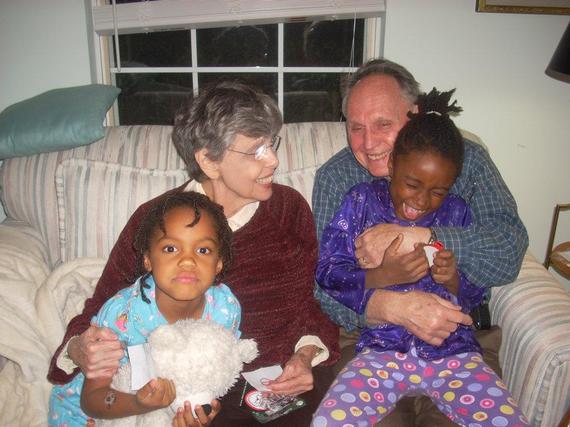 When my partner and I and our kids walk in the door we know what to expect. "Hello, Hello! He bellows, "I'm just so glad to see you sweetheart -- You know how much I love ya?"

It's a wonderful greeting for any person to get, especially a son-in-law. But then again, every trip to take out the garbage, every walk around the block and every entry from another room is more chance for him to express his delight at discovering you again for the first time.

When reminded that we've been here for a week, he shrugs and laughs. "Well, after a week, you should be happy I'm still glad to see you!"

Jokes play a big part in how my father-in-law strives to connect to the present. When I first met him more than a dozen years ago, he would relish the chance to segue from something we were talking about into his schtick of "say, that reminds me of this story."

These days, he's cognizant enough of his brain's endless loop to preface every joke by apologizing and asking me if he's told me this one already. He can't remember if he has, and I just don't have it in my heart to tell him that he's told me the same joke three times that day. So I listen and laugh.

Looking at him, I understand that a good joke is exactly about living in the moment -- an abrupt, fit of chuckling, giggling or guffawing when you delight in the absurd or ridiculous and you leave your cares and worries behind. Dad's stale jokes and my canned laugh track aside, I see the joy in his face of making another person laugh and of living in the moment.

Even my kids are in on the joke now. They've heard them all and now they race Grandpa to get to the punch line. He doesn't mind. He's never offended or deflated. Instead, he takes joy in that moment when they shriek with joy.

Perhaps though I'm moved most by those life lessons that I feel he's trying impart to me again and again. I can't help but think that somehow he's mined the recesses of his brain and carried out a few priceless things that he refuses to surrender and that he feels compelled to give to his children, grandchildren and loved ones.

I began noticing it increasingly the last few times we visited Dad.

"You know bubula, kids are a blessing from God. Remember that. I know how hard it is sometimes, but you and Todd are doing a great thing." Once, this would be a polite compliment. But again and again and again, he repeats it to me. "You always remember that, ok?" He seems to understand that a family like ours will always have critics and and wants us to know that God is on our side.

Sometimes his ramblings are disconnected. They start out with the only way he knows how to converse- by being polite and asking a stock question that he knows won't betray his condition. So instead of - what are the girl's names again he safely asks, "The kids like school?"

When I tell him yes for the 10th time, his brain, on automatic response follows up with the same rejoinder -- "You know school is so important. A good education is the key. Don't forget that, ok?"

There are more -- "You exercise? It's so important. I'm so blessed, still healthy after all these years. You make sure you take care of yourself ok? Never forget that sweetheart."

Short statements on the importance of love, fidelity, enduring hardship... they should be just hollow platitudes. But Dad wants that soundtrack in his head -- which has unconsciously guided his behavior and values for eight decades -- to play aloud for the people he loves.

It's clear he saves them for us. My mother-in-law tells me that alone, he sleeps, watches TV or walks in circles looking for something. He's forgotten what he's lost but hopeful, he'll spin around, see it and be reminded. He doesn't preach these lessons to strangers and doesn't mumble them to himself.

His brain, fatigued and failing day by day, somehow flickers alive at the sight of us. The fractured synapses crackle with some electricity and the mental bits and bytes of his values and world view come tumbling out for us.

We also hear his micro memories; of a mother, a sister, a brother and even his own son who died far too early; of his father who had trouble showing his love, and of a career that sometimes left too little time for his own family.

He doesn't need to explain any more. The life lessons here are implicit. The importance of family; the need to demonstrate one's love; and yes - in the face of life's struggle's and sorrows -- the power of living and loving in the moment.

I tell myself that these are the vestiges of his scientific mind. Life as an experiment -- now distilled and boiled down to his final discoveries.

The most poignant moments come in the moments he faces his own current reality. "Did I hurt my head or something?" "How long have I been like this? "Is it hereditary?"

It catches us off guard and breaks our heart. But the ever-present scientist in him rejects our emotion.

He only seeks the answer, and content with what we tell him, I can only imagine he stores it away hoping he can accurately retrieve this data another day and hoping for another magic second when he is fully aware and can delight us with another of the discoveries of his life.