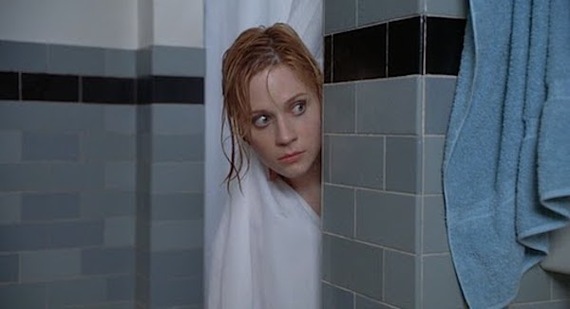 'Tis the season to be sexist, with the "traditional" Christmas pop played on an eternal loop, reinforcing old gender stereotypes about boys only wanting cowboy boots and guns while girls insist on walking, talking dollies. There's the infernal Love, Actually movie which, despite its charming British accents and treacly warm-fuzzy moments, is mind-bogglingly offensive in its depiction of women as nothing more than the embodiments of men's romantic and/or sexual fantasies. But the worst offender -- particularly this year, when it seems the epidemic of sexual assault and violence against women is finally getting the media attention it deserves -- is the classic winter song "Baby, It's Cold Outside."

To be fair, the tune was written in 1944, long before the Pill, Roe v. Wade, Free to Be You and Me -- and only a measly 24 years after women got the right to vote. There was "no such thing" as marital rape back then (in fact, it wasn't until 19-freakin-93 that marital rape became illegal in all 50 states). If you think our date rape culture is bad now, imagine it back in the '40s!

Which begs the question: if our rape problem is still so bad today, 70 years later, but we're at least now aware of this problem, then why does this creepy song still get so much play? Most of its new versions have been recorded in the last decade, with three new versions released in the past year! Yes, it's a catchy tune, with some linguistically clever back-and-forths that make for a fun (or at least, fun-to-record) duet -- even we can't help but sing along! But in the age of campus rape awareness (finally!) and Bill Cosby allegations, how can so many contemporary artists (and listeners) not be more conflicted about a song that basically sanctions date rape -- roofies and all?

Let's break it down:

I really can't stay / But, baby, it's cold outside

I've got to go away / But, baby, it's cold outside

This evening has been / Been hoping that you'd drop in

So very nice / I'll hold your hands they're just like ice

Okay, she states her intentions clearly and they're immediately met with his undermining tactics and pressure. And did he just subtly suggest that she's "frigid"? Nice negging.

My mother will start to worry / Beautiful, what's your hurry

If her mother and father are waiting for her, then she's probably still living at home -- she may not even be old enough to legally drink (or legally give sexual consent!).

Never trust someone you're still getting to know who calls you "Beautiful" instead of your actual name -- you are not an individual, you're a notch.

Well, maybe just half a drink more / Put some records on while I pour

Do not let him do the pouring! Stay with your drink at all times.

The neighbors might think / Baby, it's bad out there

How can listeners not be picturing Bill Cosby in a garish Christmas sweater right now?

I wish I knew how / Your eyes are like starlight now

To break this spell / I'll take your hat, your hair looks swell

The incessant flattery is a pretty creepy attempt to break down her will.

Okay, it admittedly gets a little fuzzy here (but maybe that's because of what he put in her drink!). She shouldn't mince words, she should say "no" flat out -- and she does, later in the song! But here, let's not blame the victim. And, yes, good for him that he asked permission to move in closer, but does anyone listening believe he would respect her wishes and not inch nearer if she said, "Uh, thanks, but I'm good"?

[Both] Baby, it's cold outside

Ugh, now we're getting into the tired, well-trod territory of the sexual double standard: how women need to protect their reputations and deny their own sexuality, while men have to be virulent sexual creatures as a matter of pride. Add to that his underhanded attempt to appeal to her socially-constructed feminine desire to be accommodating and inoffensive and friendly. And please, let's not use the Blurred Lines, I-know-you-want-it excuse that she obviously would like to stay and have sex with him but can't because of the cultural mores of the time: a person can be conflicted about their feelings, but ultimately assert their intentions clearly, as she does -- and those intentions need to be respected.

I simply must go / Baby, it's cold outside

The answer is no / Baby, it's cold outside

There it is! Couldn't be clearer.

The welcome has been / How lucky that you dropped in

So nice and warm / Look out the window at the storm

He's starting to sound like Kathy Bates in Misery.

My sister will be suspicious / Gosh your lips look delicious

My maiden aunt's mind is vicious / Gosh your lips are delicious

But maybe just a cigarette more /Never such a blizzard before

So the lesson for boys is: ignore her, break her argument down at every turn, steal a kiss, and that's when you'll start to get somewhere sexually. Classy.

I got to get home / But, baby, you'd freeze out there

You've really been grand / I thrill when you touch my hand

Blue balls are no longer a valid defense in the court of public opinion.

And the lesson learned by girls is: your number one priority is not to be perceived as a slut.

When all else fails, use the threat of imminent death as your P.U.A. power play. Isn't that one of Mystery's moves outlined in the The Game?

I really can't stay / Get over that old doubt

[Both] Baby, it's cold outside

The answer to the question of why this is now a Christmas "standard" is, of course, that sexism is alive and well today as the one remaining prejudice that's still socially acceptable to entertain publicly. Because it's funny. Because it's no big deal. Hey, lighten up! Tell that to the women in this New York Times magazine article who said no, were ignored, and froze during their on-campus assaults.

The only way this song even remotely works in this day and age is with the roles reversed: a man singing the call and a woman singing the return -- though still questionable, at least it's subversive and philosophically interesting. They did it in the 1949 musical Neptune's Daughter, which features both versions and seems pretty revolutionary for the time (the pushy man is pretty sleazy; the pushy woman is pure slapstick)

And those recordings are happening more often in the 21st century. But which of the Zooey Deschanel versions are you more familiar with: the She & Him one which does just that, or the traditional version with her and Leon Redbone (from the movie Elf)?

And that's why, to all the traditional (read: sexist) versions we hear on the radio, we say "Bah, humbug!"