The Jadeed Voices Initiative is a special project by the Muslim Writers Collective which offers a platform to reflect on our faith and the diversity among us by highlighting the exigency of promoting nuanced, multifaceted perspectives. We will be sharing one narrative a day from July 8-19. For more information about this initiative, please visit our author page, and follow the Muslim Writers Collective on Facebook and Twitter.

This morning I sat bowed over on my mattress, sobbing in the early sunlight. Yesterday night, I had a date with a boy I knew nothing about. It was the first time I went out with anyone since leaving my abusive ex-partner, Thu. On some level, through bitterness and fear and trauma and thinking that maybe I would never date anyone again, perhaps this meant that I, in the face of my own disbelief, was still hoping for love. Survival is slow, but its realization is sweet.

Black, queer, feminist poet and philosopher, Audre Lorde, understood hope "as a living state that propels us, open-eyed and fearful, into all the battles of our lives. And some of those battles we do not win. But some of them, we do."

This past almost-year has been a testament to that hope. I am - we survivors are - hope's walking manifestos, driven to continue living in the face of violence in our individual lives and the world we have built. In the wilderness of post-trauma, I have climbed through literal and figurative mountains, hope pushing me forth blindly - and sometimes unkindly - through the landscape. I can't answer as to why. Hope is its own life-force, its own God.

Last night I spent five hours with a sweet white boy who has a gift for growing plants and baking bread; who was kind and tender and nervous and good - oh, he was so good to me. I can still feel the beat of butterfly wings against my stomach, and as full as I am with grief and fear, anxiety and trauma, I feel only currents of air swirling around my insides.

I walked into the place I would meet him half an hour early and surrounded myself with poetry books, panicking slightly at what I was about to do, yet still consciously deciding to do it: to trust someone I knew next to nothing about. To have faith and hope for the best - or at least, better. And this morning, when I bent over to let my tears soak the blankets, when my mouth formed that sweet, painful 'O' shape of straggling breaths between sobs, I felt as airy as the miniature feathery wings of those butterflies behind my ribs.

Light is a funny thing.

My bedroom in Boston has two west-facing windows, yet still floods with a sunny glow in the mornings. I'm not sure how the geography of sunshine or the physics of light make it so, but I am grateful for it. The pouring over of pale yellow this morning stands in welcomed, stark contrast to the wintery heaviness I've felt for the past ten months.

For almost the entirety of 2015, I, along with my abuser and a number of other people, were being prosecuted for an act of civil disobedience we organized in solidarity with the movement for Black lives. Our group settled on a plea deal in late November for community service and probation that was far removed from the three month jail sentence, guilty pleas, and thousands in fines we were originally threatened with by the state.

This morning, after crying for a while, I opened a letter from the Somerville District Court alleging that they had not yet received my probation fee and subsequently issued a warrant for my arrest. I sent a check weeks ago, dropped it off in the mail bin right outside of work.

Some of the battles we do not win.
But some of them, we do.

Two days ago I gave this boy at a bakery a note with a pun and my phone number. Remember how I hurriedly gave him the folded piece of paper and then fled as he opened it? I couldn't stop laughing, at my own impetuousness, my daring, perhaps a little drunk off of the power that comes to us when we decide to dive into life headfirst.

There's a quote by Maya Angelou that goes, "To those who have given up on love: I say, trust life a little bit." For many months, I could not imagine what it would mean to trust life - what, trust this existence, that has made me a survivor three times over? This same life, that countered my first civil disobedience arrest with the disintegration and outright destruction of the relationships I thought of as close as blood? These twenty-three years, one month, two weeks, and two days that I have lived violence and assault and abuse and injustice, disappointments of the greatest kind, still so fresh in my mind - this, I should trust?

I have not read Barack Obama's "The Audacity of Hope" because I cannot bring myself to engage so deeply with a president who has, with no hesitation, ensured, continued, and escalated unimaginable torture and murder of my people. But the title of his book has stuck with me since the first I heard of it: again, The Audacity of Hope.

I am speaking of the audacity of Audre Lorde's Hope: this mysterious, beautiful, enduring thing with the gall to propel me forward with living. This is a being that has brought, finally, salt and water to my eyes and an opening in this tightly wound cavity in my chest, that for so long remained empty and bare and decayed. Now there is one small eye in the midst of that dark. It peers through a crack named Trust, at a world named Life, in a galaxy named Whole by the God-force of Hope.

For many months after my abusive ex-partner and I split up, I could not eat. During these months, we were forced to see each other at our joint court dates for the civil disobedience we had planned and executed together with a number of other people - most of whom failed me in this period of aftermath in deeply painful ways. At home after one court date, I dropped my fork in the middle of eating a delicious meal created lovingly by a close friend, and wordlessly left the table to curl up on my windowsill. I silently wrapped the string of the blinds around my right hand and pulled, so the thin ropes would burn and press and redden my skin. I did this again and again and again. I did not speak. I did not eat.

Eventually, I came back to the living room and clutched a yellow blanket until I fell asleep.

In my synesthetic mind, hope is the color yellow. The court date I write of happened to fall on Eid al-Adha, the commemoration of Prophet Ibrahim (A)'s sobbing, awful willingness to sacrifice his son on the order of God. When he moved to strike, God replaced his son with an animal. God, in my mind, burns along a shifting yellow-to-dark-pink spectrum, the same spectrum of color I associate with Aries, my sun and rising signs. After I woke up from my sleep that day, my friends and I drove to Walden Pond, playing and singing along to Lauryn Hill on the stereo -

"Now I may have faith to make mountains fall
But if I lack love then I ain't nothin' at all
I can give away everything I possess
But left without love then I have no happiness
I know I'm imperfect
And not without sin
But now that I'm older all childish things end..."

The sun was burning golden yellow in the pale sky, and I swam farther out in the pond than I had ever dared previously. I clutched two stones in my hand, ones that I think Thu had given me over the course of the six months we dated. I pitched them as far out as I could. I watched them disappear, the plinks with which they fell obscured by the gentle sighing and splashing of the water surrounding me.

Yesterday, I took two socks out of my laundry basket and threw them away because they might have been Thu's. For months, they lay in my dresser making me nauseous, and yesterday I finally got rid of them.

The socks will end up in a landfill somewhere, amongst who knows how many noxious chemicals preventing them from biodegrading. The rocks have sunk to the bottom of Walden Pond, as alive as ever. They will always exist, somewhere. Eventually the waves and currents of Walden will brush those stones to shore, for some other soul to pick up and wonder about. Someday those socks will become the dirt that feeds a cotton plant to be sewn into shelter for some other tired feet. Healing is not a simple matter of throwing away the badness - though I wish it were. Even that is not easy, but it is easier than letting the course of time determine whether you are ripe for the audacious, sudden power of Hope, not knowing how or when or why the golden yellow light will open you up.

I am at a point, now, where I can say why Hope fell upon me. I am warm and loving and wise and brave beyond measure. I cannot tell you why Hope does not reach every one of my fellow survivors; why sometimes the brutality of capitalism and racism and patriarchy and the awful politic of domination win out in that particular ugly battle. I don't know if my fellow survivors win eventually, but I like to think so. Somewhere, they are sitting easy, resting their eyes and hearts.

The boy I went out with yesterday evening loves biking and blackberries and art. He can carve sculptures out of wood. He speaks of his sisters with reverence. This morning I sent a message to my friend - who encouraged and wheedled and reminded me day after day to follow through with my plan to ask him out - and I told her that the boy was "so sweet and so nice." She responded almost immediately, "Good. You deserve nice."

I have a small, silky-soft animal that lives in the decaying cavity behind my breasts, poking its sweet little nose out of a crack in the stone put there by Hope. This animal is tender and shy and brown, has a heart that pounds fast and panicked against its chest, and yet it still has the audacity - against all fear - to sniff curiously at the golden-lit, undiscovered haze of life outside. This is my animal, Hope. She is relearning how it is to trust life, a little bit. 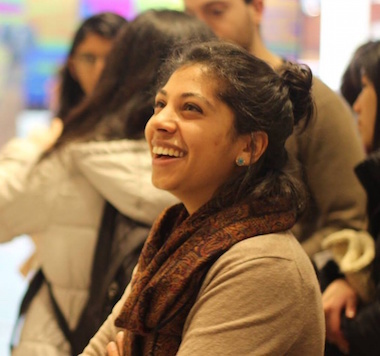 Sabrina is a Pakistani-American writer, chaat enthusiast, and reproductive justice activist based in Boston, MA, on her way out to New York, NY. Primarily a poet, her work centers on resilience, joy, and decolonizing love. Sabrina is a past poetry feature at the Asian American Writers' Workshop and East Meets Words, and her writing has been previously published in "The Riding Light Review" and "Jaggery."