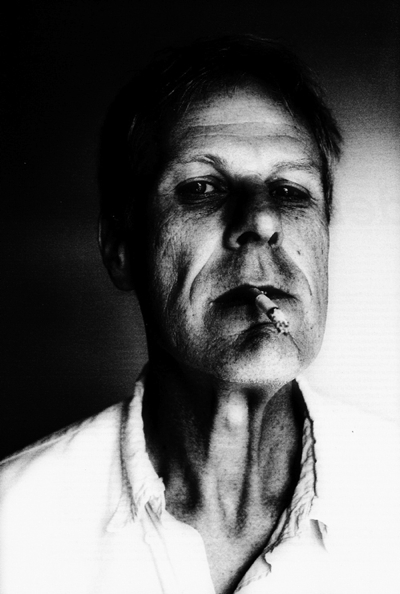 Dennis Cooper's fiction has always been unshakable, with every spare word counting -- and bruising -- but his new novel The Marbled Swarm pushes a lush complexity to the front of the work. The wordy narrator is a dandy Parisian cannibal who preys on Emo boys and conspires against painfully bourgeois families. There's also a time-and-space defying chateau. This makes for a horrifyingly effective -- and surprisingly funny -- gothic tale at first but as the narrator brings us into his world with his wandering, stuffed sentences, the novel begins to linguistically unravel into the swarm hinted at in the title. With Cooper having spent much of his time in France over the last several years, away from his native Los Angeles, The Marbled Swarm seems explicitly continental, with touches of the Oulipo Group's literary capering and a tasteful amount of cult-Euro name drops, from Isabelle Adjani to Alain Robb-Grillet.

I spoke with Cooper as he was finishing his North American book tour.

Brian Joseph Davis: Was there anything in particular you were reading or watching that informed The Marbled Swarm? Its language is certainly different from the minimalist style of your earlier books.

Dennis Cooper: Well, I wanted to build a voice that was beholden to French literature, and particularly to its avant-garde wing, which had such a huge impact on my writing from the outset, but was kind of polluted with my own voice, which is very American, I think, and specifically Los Angeles-centric in its flatness and in its attempt to induce some kind of poetic trance within its limitations. But I wanted to be very careful not to end up imitating particular writers' styles, so I went out my way to avoid reading any French fiction or poetry while I was writing the novel in hopes of achieving a kind of prose that would have a French vibe rather than writing that would display obvious French earmarks. Instead, I studied a lot of French films, thinking they would be a source far enough away from fiction that nothing from them would get noticeably grafted on. The films that had the biggest impact were Alain Resnais' Providence, both because its meta-fictional central conceit had a relationship to mine and because it's a very French film that is crosshatched with an English text and actors, and Eric Rohmer's Perceval les Gallois, which is a film largely set outdoors but shot on a highly stylized indoor sets, because I was very interested in how strangely it used very artificial representations to play with viewers' ability to suspend belief.

BJD: The narrator is playing a predatory game in the book but he is also playing linguistic games on the reader. Was that kind of Nabokovian teasing in your original plan for the book or did that voice come in later drafts?

DC: That teasing was there from the very beginning, or, rather, the novel's style was constructed in order to enable that kind of linguistic game playing. What entered after I'd established the voice and was elaborated on in later drafts were the writing's props, as I think of them: the secret passage-laden chateaus, the tricky relationship between flat pictorial illustration/animations of people and places as employed by Japanese anime and manga and Disneyland and so forth versus the more fleshed out representations that fiction allows and basically demands, the actor versus "real" person motif, the play with surveillance, and so on.

BJD: How do you think your nomadism between Europe and the U.S. has altered your work? The Marbled Swarm has a haunted Europe sensibility, akin to a late-Buñuel film but there are also moments only an American would think of, like when the narrator confesses that he first mistook the chateaus of France as "Disney castles."

DC: Having lived the great majority of the time in France for the past six years had a giant impact, as did my not yet having learned to speak or understand the French language with much sophistication. On the one hand, I live here, and I have gotten a grasp on how the French view their own culture and country -- enough so that, say, when I saw Woody Allen's Midnight in Paris, I shared my French friends' amusement and feeling of being charmed by how extremely American and romantic his view of France is -- but, on the other hand, I haven't lost my long term, very American presumptions and reference points. The interesting thing for me is that I'm able to straddle the two perspectives and feel them both in a way that's both comfortable and conflictive, and it was precisely that in-between viewpoint that I wanted to represent in the novel's narrator, whose voice is fatally ruptured and flawed by its American influence.

BJD: Why do we keep writing novels? There's some nagging truth to the narrator's statement "I've never read a decent novel in my life unless skimming fifteen pages of Houellbecq's Platform to make conversation counts." I could comfortably stay in the art world, or poetry, and make "book" projects, with quotation marks. But I try to leave that world every few years to make books without quotation marks; I think mostly to see if I can. For you, there are the theater and music collaborations, which have to feel much different, more immediate, than novel writing. What does story telling in this 50 to 100-thousand word format still hold for you?

DC: No, the novel is still the form I feel most dedicated to and the one in which I feel most wholly at home. The theater and music collaborations are extremely interesting, but, partially due to the lack of full control that comes with collaborating, I continue to think of them as places to experiment with my writing, to escape fiction temporarily or to use as opportunities to gauge my abilities and test their limits. I feel like I'm utilizing and fooling around with fragments of my talent when I work in theater and music. There's something of a relationship to the writing of poetry, but I always feel as though there is a big limitation to how much I can do and give to those kinds of work. There's just something about fiction, and most especially about novel-length fiction, that feels far more conducive to what I want to do as a writer than any other form. Other than wanting or maybe even needing that much room to get at what I have to say, I really don't know why.