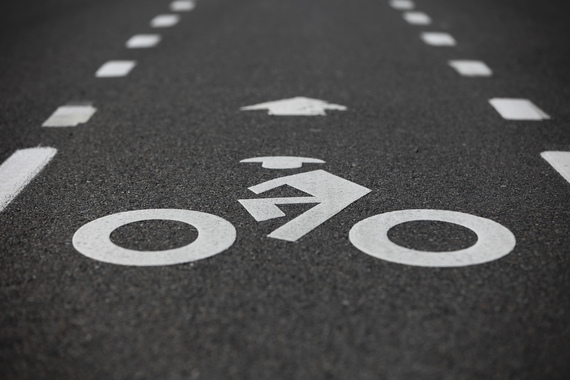 I get around a lot.

No, not THAT way. I mean, literally. Getting from place to place in D.C. can be a pain. True, it's a small city -- very manageable, with little sprawl -- but with traffic, construction, and other typical urban-living hassles, traveling from point A to point B can be unpredictable and harrowing.

Luckily, there are numerous modes of transportation. I alternate between being a pedestrian, a cyclist, and a driver, and I've noticed that my attitude towards transit as a whole shifts dramatically depending on my current means of transport.

For instance, as a pedestrian, drivers annoy me immensely. How dare they assume they have the right of way? I walk like I own the city. I'm indignant. I'm haughty. I move as fast or as slow as I wish and I could give two hoots about whom I'm inconveniencing.

But that entitled attitude swings drastically in the other direction as soon as I hop on a bike. As a cyclist, I'm terrified of drivers. Cars never seem to see you or care. Studies show that cyclists were involved in 49,000 accidents nationwide in 2012, and, though rare, fatalities did occur. You're meant to share the road, but when it comes to coexisting with drivers, you've got to be aware at all times and recognize that they can kill you. It doesn't help that the most popular vehicle in 39 of 50 states is the Ford F-150, a two-ton behemoth that can mow you down in an instant.

As a motorist, I'm irritated with everything and everyone. People, bikers, other drivers - you name it, I hate it. There's always so much traffic. There are too many stop signs. The UPS truck is parked in the middle of the road blocking three lanes. It's a nightmare. Driving in D.C. is unpleasant, to say the least.

From the driver's seat, it appears that pedestrians enjoy strolling willy nilly through intersections. They don't look. They're CLUELESS. Walkers always have their dumb earbuds in, or are eyes-down engrossed in messaging or profile updating, and they have no respect for the fact that I'm operating machinery that I'm barely qualified to operate.

Cyclists are even worse. They're ballsier than jaywalkers and speedier too. They zip in and out of traffic and pay no heed to signals. Though it's NEVER my intent to harm anyone when I'm behind the wheel, sometimes I feel as if cyclists deliberately test the reflexes of the drivers around them. If I could give cyclists one message it would be: please, please don't assume that I see you.

When I'm walking the streets of my city, naturally I assume the cars should yield to me. Drivers are the ones all snug in their covered vehicles, while we poor pedestrians are at the mercy of the elements. On rainy days I stare down every driver nestled within their dry, heated cabin.

But on those days when I'm fighting rush hour traffic driving through D.C. streets, I feel a seething jealousy for every pedestrian not imprisoned within a hermetically sealed two-axle metal cocoon. It's so unfair that they get the right of way when we're the poor sods stuck in gas guzzling, air-befouling machinery for hours just trying to get home so we can stretch our legs!

I can't be the only one who feels this way.

D.C. is replete with residents and workers who vary the means by which they get around town. Someone who typically walks to work on a nice day is likely to hop on the metro when it drizzles. A driving commuter who lives in Arlington might choose to grab their bike and ride to work on a crisp fall morning.

So how can we all be less stressed out and, dare I say, enjoy our commutes? It's all about empathy.

No matter which method of transportation you're currently using, put yourself in the shoes (or seat!) and mindset of the others. Take a deep breath, settle in, and remember that most of us are just trying to get home to our families at the end of the day. We'd all like to arrive in one piece. Can't we all just get along!