There are lots of legitimate reasons to dislike the current
bills being considered as health care reform.
For instance, the best of them considers universal coverage to mean that
more than 12 million people are still left without health insurance.  None of the bills do much to contain costs,
meaning that health care costs may still rise faster than inflation and consume
even more of our GDP.  Too few people are
likely to be able to access many of the benefits of reform, such as the
insurance exchange.

Reform as currently prescribed does not fully decouple
insurance from employment.  Out of pocket
costs are still too high for many Americans.
And it’s unclear whether even the regulations contained within will be
able to curb the worst practices of the private insurance industry.

But instead of any of these arguments, we’re left with this
from the Republican
Minority Leader:

This is not affordable... what this is going to do is
bankrupt America.

A little perspective please, Mr. Boehner.  Not only is it not going to bankrupt America,
it’s one of the first things we’ve seen in a while that actually has been
scored to be deficit reducing in the long run.
Even if it weren’t, even if it weren’t paid for, it would be worth
remembering how much this bill costs compares to other spending.  All of the plans come in under $900 billion
over a decade.  That’s an
average of $90 billion a year.

Remember the tax cuts signed into law by President Bush back
in 2001 and 2003?  A “defensible
estimate” is that these cuts cost about $1.8 trillion from 2001-2008. Brian
Riedl of the Heritage Institute said that number was about 25%
too high, because it doesn’t account for stimulus and growth. Let’s go with his numbers.  That’s $1.35 trillion over (conservatively) eight
years, or about $169 billion a year.
That’s about twice the cost of health care reform.

Take a look at some entitlement programs.  In the good old days, you could always count
on Republicans to talk about how Social Security and Medicare were going to
bankrupt the government.  And we should
be concerned, because Medicare cost us almost $470 billion
in 2008.  And, with expenses rising fast,
it’s likely that number will continue to rise.

When the
Republicans passed Medicare Part D (which was never, ever considered deficit
reducing), I don’t remember hearing many concerns from them about the cost.  And now, since the Republican party has become the “protectors
of Medicare” and has positioned itself never to allow any cuts to Medicare,
that could bankrupt America.

We should also worry about Social Security, because last
year, old-age and survivors insurance (OASI) payments for social security were
over $515 billion.  That’s just for 2008.  Granted, more is still being brought in than
is going out when it comes to social security, but that’s a lot of money.

This is a pittance, however, compared to what we spend on defense.  Just in the last month, the
president signed a defense appropriation bill for $680
billion.  For this year.  That doesn’t include the costs of the wars in
Afghanistan or Iraq.  That’s bankrupting money.

But get this.  We
spent about $2.4
trillion on health care in 2008.
That’s trillion with a “T.”  You
and I – through taxes – pay for more of this than you think.  Remember Medicare?  Taxes pay for Medicare.  Medicaid?
SCHIP?  The Veterans’
Administration?  Taxes.  That tax break for employer provided health
insurance? That also costs money.  Many
people also forget the health benefits of public employees.  This includes not only those who work for the
federal or state governments; it also included people who work for public
institutions.  Policemen, firemen,
teachers, even me – you are all paying for our (private) health care out of public funds.

When you add up all these costs, they come to about 60% of
health care expenses.  This means
that the public – your tax dollars – paid perhaps $1.5 trillion for health care
last year.  That’s what will bankrupt us.

Here’s a handy chart to compare these yearly
expenses: 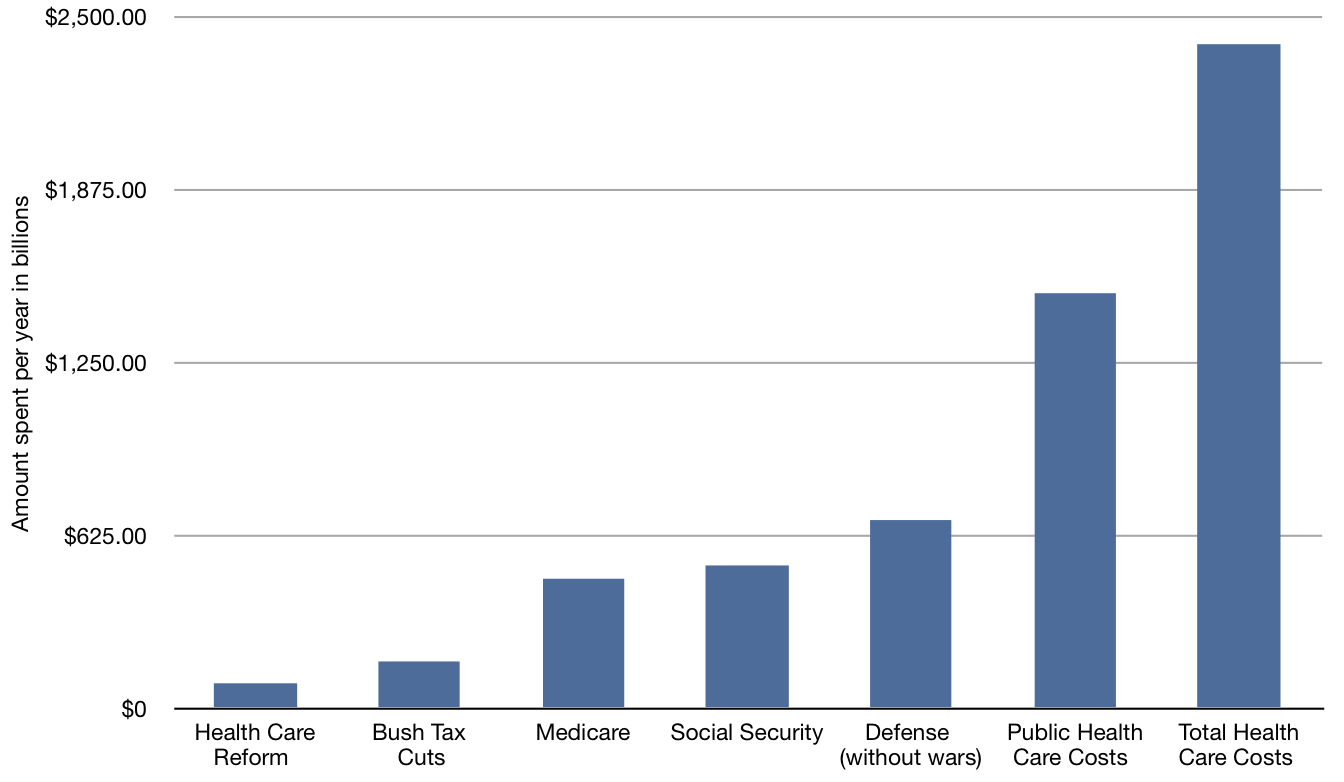 Think about that every time someone complains about the cost
of reform.  People are saying that of all
of these things, health care reform
is going to break the bank.  No.  Health care costs are what might bankrupt us, and I am all in favor of reducing those, but railing against the cost of reform while ignoring all the rest is willful ignorance.

Look, I get that for political reasons, those that oppose reform are
going to come up with any excuse they can to fight it.  I accept that.  But the media doesn’t have to swallow it;
neither do you.

Read more about health care policy and get your
questions answered at Rational Arguments.