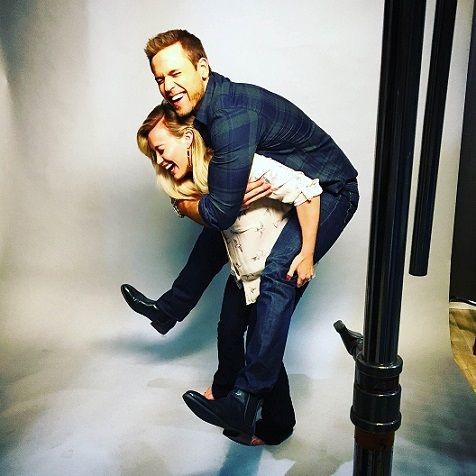 Dan Amboyer and Hilary Duff of TVLand's Younger trying out some new tricks for a photo shoot.
Dan Amboyer's Instagram and Twitter at @danamboyer

Ohhhh yeah. What's not to love about Dan Amboyer? This guy has a lot to say, so I split it into two interviews -- so if you want to see a shirtless selfie of Dan, make sure you also click Part II. Muhaha and you're welcome.

You play Thad Steadman in TV Land's Younger. Tell us about your audition and your character.

I first heard of Younger when my agent called me with an appointment for the pilot, and she sent over the script and audition sides for my role. Sutton Foster was the only actor attached at this point. Fortunately, I had built rapport with this casting office over time, so they brought me straight in to meet Darren Star.

The crazy part was -- that day I was in final dress rehearsal for a performance of Proust's epic Remembrance of Things Past, adapted by Harold Pinter and Di Trevis, who was also re-staging her acclaimed production that ran at the National Theatre in London. Di was my teacher, a regular employer, and one of my theatrical idols. This was a meaningful moment for her to revive her work, and the first time the play was ever to be seen in the US. Anyway, we were running past our time at dress rehearsal and I was getting anxious about the Younger audition, but I couldn't walk out and leave the Proust company in the lurch. As soon as I could, I bolted out of the theatre. Freezing rain. Rush hour. And of course, impossible to get a taxi. I was running around East 90-something street like a mad man desperate to find a cab and get to my meeting with Darren. When I finally got one, I had to make that dreaded call to my agent to relay that I was going to be late. I changed into my suit in the back of the cab, and my agent's assistant called back to say that Darren and the casting directors would wait for me. I had the last appointment of the day. I ended up just ditching the cab and jogging the last several blocks through Times Square gridlock. I actually think it was an advantage to be so distracted by the nutty circumstances. There was not a spare beat to be nervous!

When I arrived, everyone was fortunately pretty relaxed and I walked straight into the taping room. I did the sides, Darren seemed responsive and directed me several different ways, tinkering with my choices. They said thank you and that was it. A couple days later, we got a request for my reel. A little more time went by, Hilary was announced to join the pilot, and then I got an email with the offer -- on a Sunday! From there things moved pretty quickly to our first table read and filming.

What is your typical day on set of Younger?

The old saying of "hurry up and wait" is pretty accurate. I'm usually called a couple hours before I'm needed on set. Ladies are always longer in hair/make up, so I wait in my trailer for a chair to open up. I crank up Spotify, sometimes get the blood flowing with a little solo dance party. Recently, I added articulation exercises into my routine. It makes me nuts when I can't figure out what TV actors are saying, and watching some of my stuff back, I thought I was dangerously on that cusp -- so I'm taking action! Even though we are nearly whispering on camera, I want you to understand these writers' hilarious words.

I will also go hang out on set and watch the other actors work. I think everyone in the cast is so stinking funny, and I am constantly tickled and surprised by them. I love sitting in the producer's bay and watching the live takes on the monitors. The writers / producers have such vibrant personalities that it is the most fun place to be on campus. 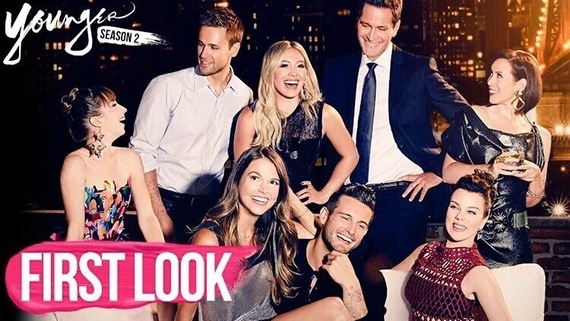 Are you anything like your character on TV Land's Younger?

Well, we do have a similar look. And my understanding of him must come from somewhere in me. But, we are very different for sure. You might say I am nearly Thad's opposite. One thing I love about acting is living in the "what if." What if I said whatever the heck I wanted to with no filter? Who would I be if I had pursued a steady career track in business? What would life be like if everything seemed to go exactly to plan without much hardship? Maybe Thad is my alter ego. My chance to live through that opposite. It's really a ton of fun to play someone so different. And I get some of the best punch lines!

At the wrap party last season, I was chatting with a producer who said that one thing they liked about me in the role is that because I'm not a natural douchebag -- Thad doesn't just come off as hateful. When I get my scenes, I always look for the positivity and the fun. So, maybe finding Thad somewhere in the middle has served us both well!

You actually wear a watch!

I have a silver Seiko that I have been wearing non-stop for over seven years. It is my first and only "adult" watch. I received it while I was on vacation in Zurich (a Japanese watch from Switzerland, I know), and it has scarcely left my hand since. It was a gift and carries a lot of meaning for me. I have worn it in so much of my work. It was my watch throughout my time playing Prince William in Hallmark's William & Catherine: A Royal Romance, the never-to-see-the-light-of-day John Cusack pilot I did for CBS, and even that very first Younger episode. Pretty much anything I've done you can spot it in frame at some point!

Are you more of a shy guy or outgoing guy?

Growing up, I was the awkward chubby kid. I had a few close friends, but I was the first one to be bullied. Middle school left some scars, as I'm sure it did for many of us. When my body started to change, I felt a bit like I was living inside a stranger. People began responding to me differently, which was confusing. I was extremely shy, but since college, I think I have opened up and gained confidence. I find it much easier to make friends, I let myself go a bit more. I strive to destroy fear and judgment that once stifled me. I have a great #squad and support system. And although I am naturally more of an introvert, I am tickled when strangers mistake me for an extrovert! I do love to have fun and be goofy.

Did you ever have long hair in your wild days?

Oh, did I! I had surfer hair for years and years. It got longer and longer in college, and by the time I graduated from school, you'd think I had just rolled in from Malibu rather than Detroit. (I believe the evidence is Google-able.) When I first got to New York, all of my auditions seemed to be for surfers, hipsters and drug addicts. I kept telling myself that my hair was unique and that it separated me from the crowd. Ultimately, I got a play that forced me to cut it off. I went kicking and screaming, bargaining for just a trim with their barber. It all got chopped. And it was extremely liberating. I'm not a druggie or a surfer -- so I was finally being seen for roles that were more in my wheelhouse. I still kick myself when I think of all the appointments that I didn't get because the casting directors thought I was going to saunter into to their Shakespeare audition as the strung out guy who maybe makes some side cash playing his keytar on the Lorimer subway platform.

Please read Part II of my interview with Dan Amboyer!