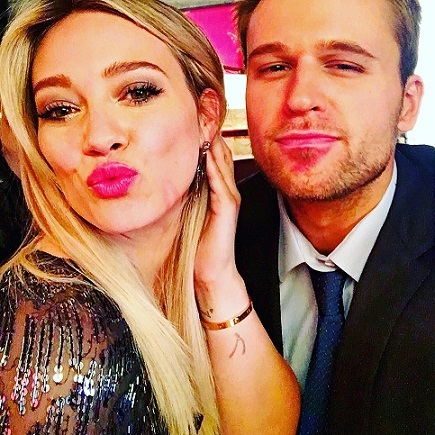 Dan Amboyer of Younger after a night filming an intense make out scene with Hilary Duff.
Dan Amboyer's Twitter and Instagram: @danamboyer

Dan Amboyer is making my head spin. I already erased three introductions that weren't fit for readers of all ages.

Dan loves to talk ... and talk ... and laugh, then talk some more. Oh for crying out loud -- I bet you already scrolled down to see the shirtless selfie!

Please see Part I of my conversation with Dan! I mean it! READ IT! Thank you.

What's the best music concert you've ever been to?

Last night I got the best impromptu concert. I was staying solo at a boutique hotel in West Hollywood. After a long day, I came back to the hotel with some late night Argentinian takeout food. I was walking through the lobby, and there was this group of three musicians passing a guitar around playing and singing for just each other. No one else around. I was curious, so I settled into an armchair in the corner, trying extremely hard to look like I wasn't paying attention fiddling with my iPhone. They were pitching melodies for new songs, tweaking lyrics for works in progress. Also sharing some of their old favorites. I was enrapt. The raw talent was palpable and hearing it so intimately hit me in the gut. That is exactly the type of music experience that gets me excited. I am a singer and also play piano, I grew up surrounded by people like this in art school. I don't need a huge concert's production values, just someone pouring their heart out with killer talent. Before I left, I had to stop and ask their names so I could look up their music. My takeout steak may have been cold by the time I got back to my room, but I found a cool raw talent named April Geesbreght's to add to my playlist!

What's your favorite vehicle and why?

I am a New Yorker! Mass transit is my sweet ride. I know the subway system like the back of my hand. Plus, it's better for the environment and much safer after a late night out on the town. And bonus, there is no better place to people watch than 3am on the L. But I did have a beat up used silver Mercury Sable in college. Bertha had grey leather seats like a crusty 80's leather jacket, and I'll never forget her. I took many a cross-country road trip (and Canada!) with my college friends in that old granny-mobile.

Your film Love the Coopers was recently released, and you have more lined up! What's the difference between working in film, theater and TV?

To me, the biggest difference is the preparation. There isn't the luxury of rehearsal time in film and TV. You are usually put into your costume and makeup before you even rehearse. You are expected to show up to set memorized, with choices made for how you might want to play the scene, performance ready. However, you may have been thinking through the scene completely differently than the other cast members or the director -- so you also must be able to change all of your choices on a dime. You prepare with flexibility. You spend a couple hours shooting the scene, then it is gone forever. I will be walking down the street maybe a week later and an awesome idea will dawn on me -- something else I could have done in a scene, maybe even just a funny bit with a prop. That can haunt you. But unlike in theatre, there are no second chances for that scene.

Theatre is all about the process, and the sense of community that is created. You have weeks of rehearsal, time to explore your character and get to know the other actors. There is opportunity to try off the wall ideas, to find layers and nuance over weeks. You become like a second family with your cast. You can go have some beers together, talk through a scene that seems to be blocked for you. You eat, sleep and breathe your role. Once performances start, it's just you naked in front of the audience. No second takes, no editor to shape your performance. You must tell the story from beginning to end over the course of a couple hours, and that performance has to be fresh eight times a week. There is a real discipline that you must adopt so that you are always in peak fighting mode when showtime rolls around every day. It is exhilarating and dangerous to perform live. You are walking a tight rope in front of hundreds of people, anything could happen on stage, and whatever does, you must find a way to make it work.

What I love about working on Younger is that it combines some of my favorite elements of both theatre and film. When you do a one episode guest star or a couple days on a film, the process can feel transactional. You may be thrown into a love scene with an actor you have never met before playing your wife on your first day. But with Younger, our group has known each other for coming on two years. There is a familiarity and consistency like a comfortable little theatre family. And most of us do come from a theatrical background. We have a ton of fun together. There is a short hand to our process; we can anticipate what everyone needs to do their best possible work. So the group of people is consistent like in theatre, but what changes is the story line and writing. You aren't performing the same play a hundred times, rather, there is an evolution. It is exciting to play a character over a long period, see how they grow. In this second season of Younger there is an awesome journey for Thad with huge surprises, and I'm having a blast taking that ride. 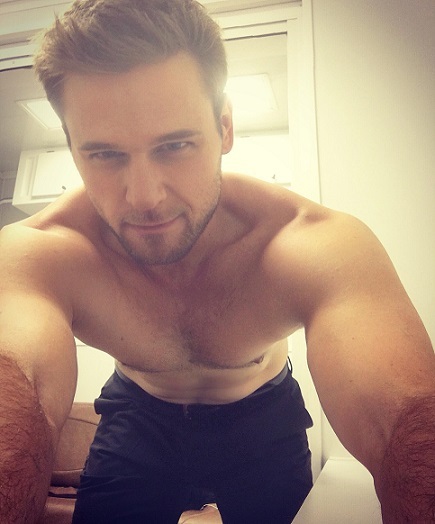 Dan Amboyer -- "Selfie in my trailer -- left nearly naked while serious triage takes place on for an ill-fitting suit (wardrobe says I've "hulked out" of my season 1 suits!)"

With an extensive background in theatre, what were the deciding factors to make the leap to film and television, and what's been your biggest takeaway from the transition?

Theatre was my first love. I didn't start with ambitions beyond being a working stage actor. It never occurred to me that more might be possible. When you're a kid growing up in Detroit area theaters, you do it for the love -- not the fame or fortune. TV and film jobs just seemed unreachable, meant for someone else. I imagined myself being happy if I could earn enough to make a living while doing what I loved -- acting in great plays. A repertory theatre like the Royal Shakespeare Company was my ultimate dream.

After graduating from Carnegie Mellon University with a degree in theatre, I headed to New York. I signed with an agency, and doors started opening. I was auditioning for theatre, but more and more film and TV appointments started to come my way. I didn't quite know what I was doing on camera yet. So I schooled myself by watching more TV and film, and found myself hooked on shows like Six Feet Under, Weeds, of course Breaking Bad. I became excited by the form's possibilities. Through a lot of trial and error, I started booking some TV jobs. But it wasn't until I played Prince William in William & Catherine that I found a kind of joy in acting for the camera. I discovered how the lens can magnify these microscopic unscripted moments between two people--things you could never plan. Moments that could never be repeated. The camera loves spontaneity and nuance.

Since wrapping the first season of Younger last year, I've worked on Batman v. Superman, an off the wall web series, the premiere of David Ives' new rhyming couplet play The Metromaniacs at the Shakespeare Theatre, the Love the Coopers film, IFC's indie series Benders, a production of Shakespeare's Twelfth Night opposite Piper Perabo, a workshop of a new rock musical called Cotton Candy & Cocaine, and now I'm back shooting season two of Younger.

I mention these not to boast, but to share the fun variety I've been fortunate to explore. That is hugely satisfying and keeps me constantly on my toes. My hope is that I may always continue to be involved in such varied and challenging projects. If there is great writing and passionate collaborators -- whether it's a tiny off-Broadway production or a huge film -- I'm totally there!

I'm really excited for everyone to see this upcoming season of Younger! We're back Wednesday January 13th at 10 p.m. When the new episode scripts first pop up in my email, I must look like a crazy loon because I scroll through on my phone, where ever I am, just laughing and laughing. There are enormous twists and turns this year, and I think the fans are going to love it.

Remember to read Part I of my Long Conversation with Dan Amboyer!