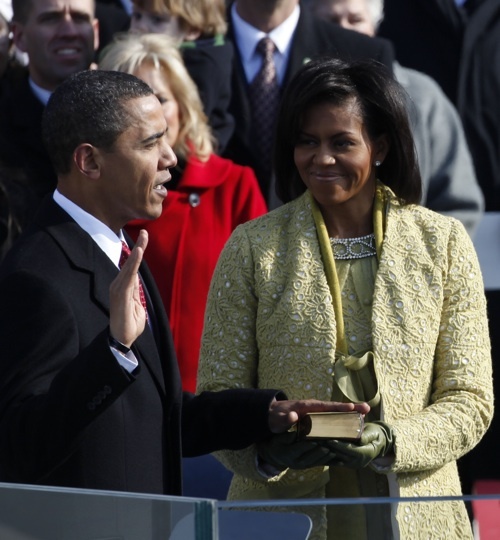 We're 100 days into our Obamanation. Yes, some of the initial high may have worn, but there's still a glow (for a majority of us, at least). Despite a failing economy, swine flu, and North Koreans shooting missiles, things are still more hopeful than they have been for some time. Once you go black you don't go back. Or, at least, that's what my wife tells me.

To celebrate the first 100 days, "Barack Obama: The Official Inaugural Book" (Five Ties Publishing) is in stores today. It' a surprisingly emotional photo diary of that distant day in January when we celebrated the swearing-in of our 44th President and watched Aretha's hat sing to the nation. Seriously, that was a big hat. It's also a reminder of how politics and celebrity have truly melded.

Robert McNeely is one of the book's photographers and producers. In a nod to Obama's populist and inclusive message, McNeely's work sits alongside hundreds of others from everyday citizens who posted their own images on Photobucket. "The Official Inaugural Book" is the first publication of its kind to break the wall between "professional" and "amateur" photographers. And it's a perfect testament to that former community organizer who, just a few years ago, was an unknown state senator paying off his student loans.

McNeely has been around Presidents for more than 30 years. His first photography gig was covering George McGovern's failed 1972 Presidential campaign. He was a staff photographer in the Carter White House and Bill Clinton's personal photographer during his administration. He knows a thing or two about taking pictures of Presidents.

On the eve of the book' release and an exhibition at the Smithsonian, McNeely answered a few questions about Presidents and pop culture:

Many of your images in the book look like they could have been taken at Woodstock. Are you a child of the '60s?

Well, I am a Vietnam vet, but I'm definitely not a flower child. Although a month and a half after I returned from Vietnam, I went to Woodstock. I try to bring a joy to my photography. There's definitely a "doom and gloom" school of photo journalism which I'm not a part of.

Looking through the book, you realize how politics and celebrity/pop culture have become intertwined. Did you see this with past Presidents?

No, but I think it's more of a difference in culture, not politics. Granted, you take a Benetton ad guy [Obama], and it's easy for people to glorify him. His athleticism, newness, and modern-ness are all so fresh in politics. I mean, [John] McCain is a celebrity too in military circles, but it's such an entirely different thing. I think the previous generation had to work so hard to prove themselves that it left them with a chip on their shoulder. The Obamas don't have that. There is an openness that is just part of this next generation.

What are you looking for when you shoot a picture?

I look for things that are greater than the sum of their parts. As a photographer, you're reducing three dimensions of space and one dimension of time to something on paper. It's the same as a musician dealing with sound. I'm a great believer in "The harder you work, the better you get.' I'm not naturally gifted, but I learned by looking at pictures that move me and then trying to emulate it myself. The great photographer Henri Cartier-Bresson calls it 'the decisive moment."

How does Obama look through the viewfinder compared to other Presidents?

He's very comfortable, very secure in own skin. You can see that he focuses on people around him. Jimmy Carter was a control freak who couldn't stand anyone else in room with him, taking pictures. After two frames he wanted you out. Bill Clinton never stopped me. Once, I made him lose his place during a radio address on a foreign trip. I may have gotten a little closer than I usually do. He yelled at me but apologized later.

Can you tell when someone is "on" for camera vs. not?

Yeah but you're there so much, eight to 12 hours a day, that you really disappear to them. They forget you're there. Now, maybe if they're yelling at someone and pointing in their face, they may think, "I don't want to go down in history as being this angry guy, so they pull back for a minute. But otherwise, it's very natural. You're just there recording events, unlike a formal press conference or photo op. That's a different thing.

It must insanely daunting to follow a President around with a camera. How do you stay out of the way?

You have to become a quiet, nonintrusive part of the event. You have to make yourself disappear. You don't get in the way of what's going on, you don't talk, and you turn your mind off. I have no clue what was being said in any of the White House meetings I attended. I'm just watching. When I first started, an older White House photographer told me, "Don't bump into furniture." That seemed simple enough. Once, I was with Clinton at a fundraiser hosted by [legendary film studio executive] Lew Wasserman. As soon as I walk into his house, my camera bag knocks over an end table, and this vase crashes to the floor. So much for blending in.

How has technology changed photography?

EVERYONE has a camera now. People are aware of their surroundings. At the inauguration I kept seeing all these people taking pictures. Years ago I would have felt at odds with them. Now I saw them all as co-conspirators. Obama showed what can happen when you bring people into process, and this book is a tribute to that. The Photobucket images are some of my favorites in the book.

If you could pick a song for the soundtrack of the Obama presidency, what would it be?

"Get Together" by Jesse Colin Young.

Thirty-seven years after the McGovern campaign, did Obama's Inauguration feel like a full circle?

Absolutely! Now we have someone with such a varied background, a multiethnic who believes it's all possible. It feels like the promise of so many past Presidencies has been fulfilled. Carter was a disappointment. Clinton's heart was in the right place, but he was child of my generation and brought the hang-ups and limited view of Baby Boomers. Then the Bush years... I left Washington, D.C., when Bush was elected. People who live outside of D.C. don't realize that the Presidency really sets the tone for the entire city. I left on September 10, 2001.

One hundred days after the Inauguration, are you still on a high?

I'm definitely still on a high. You couldn't get any lower before.