The final fall semester of my master's degree cumulated in a once-in-a-lifetime experience in Paris: presenting at SolutionsCOP21 as a climate innovator and participating in COP21 as an observer with the University of Maryland delegation.

I was fortunate to witness climate change history in Paris at COP21, including the official adoption of the final agreement by 195 nations. Though I was not privy to the meetings and discussions that would ultimately shape the Paris agreement, having observer status had its benefits. Being able to interact with climate and environmental experts from the public and private sector, NGOs and civil society, country negotiators and delegates, COP21 was an immersive and inspirational experience.

1. My journey to Paris
Through a global Climathon competition, I was sent to Paris to pitch a solution to food waste in a climate innovation showcase at SolutionsCOP21. 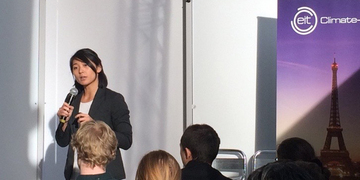 Over 900 participants in 20 cities from six continents competed. It was motivating to hear of other cities' innovative solutions to address their specific challenges. Each city representative pitched their solution in front of an audience of city, business, and climate leaders, and as it turned out, I came in third place globally! I felt fortunate to represent Washington, D.C. on a global platform, especially an issue so relevant today - food security was even mentioned in the Paris agreement. I was also granted a rare opportunity to observe COP21 through my graduate program, after a semester-long course studying climate negotiations.

2. A quick resolution for the Paris Agreement
After a week of tracking agenda issues and reading drafts of the text leading up to the final adopted agreement, we were sitting in the party overflow room of the closing plenary. 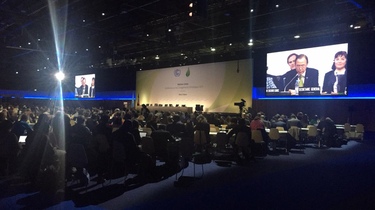 Delayed by two hours, you could hear people beginning to wonder: what was taking so long? Turns out in the early hours of the morning (after a couple of all-nighters), some words were left in the text in error - most notably, the shall v. should distinction, a deal-breaker for the U.S. However, President Laurent Fabius quickly brought attention to the floor, the gavel came down, and after a moment of astonishment, cheers erupted on the floor. Emotions were high as participants celebrated years of work that were reflected in the Paris agreement.

3. Everyone showed up in Paris
I was chatting with a country negotiator, who claimed that only 200 or so people knew what was really going on with the negotiations, yet 40,000 people were in Paris. Everyone had shown up to stake a claim at COP21 by hosting side events, both official and unofficial, organizing rallies, all to bring attention to an issue and to participate in some way, big or small. Getting an insider's perspective on some of the issues heavily debated was eye-opening. And in a later conversation with a United Nations expert, I learned that every country had compromised on an issue in order to reach an agreement. 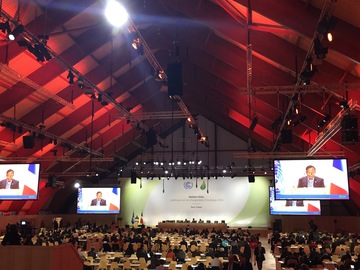 Here, countries deployed negotiation tactics and formed coalitions to advance their interests. COP21 was truly an international political process. Because of the political momentum and desire from all sectors to have an agreement emerge from COP21, together with the political unity after the terrorist attacks, it was clear to me from the beginning that there would be an agreement adopted. It seemed too that no one country wanted to be blamed for the Paris talks failing.

5. Setting the stage for the new era
Walking down a hall to grab lunch one day, I ran into the EPA Administrator, Gina McCarthy! Meeting her was one of the highlights of my experience at COP21. Later that same day, I was sitting with other graduate students in informal discussions with high-level officials from the Council of Environmental Quality at the White House and the U.S. Environmental Protection Agency, and it occurred to me that I could be sitting among the next wave of environmental leaders. The Paris agreement set the stage, now it's time to get to work. As Administrator McCarthy says, let's not think of it as the road to Paris... but the road through Paris.