When it comes to reaching pay equity, the pace of change is glacial. Just how long will it take until we see equal pay? At this rate, it could be more than 100 years. 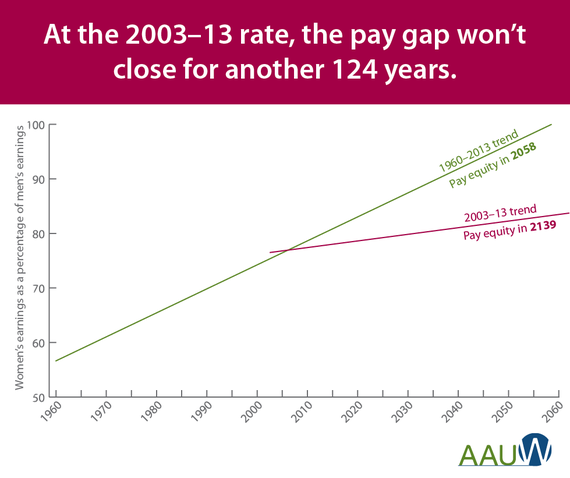 In the 1950s, congressional representatives began to introduce bills for equal pay for women, but passage of such legislation would wait until 1963, when President John F. Kennedy signed the Equal Pay Act.

Legislation set the stage, but it would be another two decades before wages began to move toward actual pay equity. In the 1980s and '90s, women's earnings rose at a steady pace. The pay gap reflects many factors, but the dramatic increase in the numbers of female college graduates is indisputably a driving force behind women's rising earnings during this time. Thanks to education coupled with longer careers, women's earnings rose and the pay gap shrank. More recently, however, as these social changes stabilized into the status quo, the pace of change has slowed to a near halt.

As shown in the graph, if we analyze the change in the pay gap from the 1960s to now, we could extrapolate and expect to see pay equity in 2058. But the trend over the last decade suggests that we won't see equal pay until 2139. So is the recent or long-term past a better predictor of the future?

While I would like believe that the more optimistic model, I am going to go with the recent decade. Unless we expect to experience the kind of social change that started in the 1960s, we have to assume a slower pace of change moving forward. Sadly, if the recent past is then the best predictor, the pay gap is not going to close for another 124 years.

Luckily, there is a lot that we can do to speed along the process. Companies can adopt policies to support flexible work schedules as well as conduct job audits to ensure fairness. Colleges and universities can encourage young women to consider higher paying fields such as engineering and computing. Individuals can serve as mentors and sponsors for the next generation of women. Women and girls can do many things on their own behalf, including honing their negotiation skills and knowledge of the job market. Policy advocates can help channel public resources into child care and other forms of care giving and urge Congress to move forward the long-stalled Paycheck Fairness Act. And, of course, you can join AAUW, where we'll keep our focus on achieving pay equity -- however long it takes.

This entry was cross-posted from AAUW's blog.