In the days following the decimation of the Iraqi Army during Operation Desert Storm, groups of Iraqi minorities, specifically the Shia in the south and the Kurds in the north, seized on the weakness of Saddam Hussein's armed forces to try and overthrow the Iraqi Baathist regime that had oppressed them for decades. At the behest of President George H. W. Bush, protesters and Iraqi Army deserters began to take over major cities such as Basra and Kirkuk; they believed that with anticipated American aid they could overthrow Saddam Hussein and end his tyrannical regime.

At one point, the Kurdish forces in the north and Shia protestors in the south controlled 14 of Iraq's 18 provinces. However, American aid never materialized, leaving the Shia and Kurdish rebels vulnerable to attack by Iraqi Army helicopters and tanks.

In the end, hundreds of thousands of protesters and rebels were killed when Saddam's forces regained control of the north and south, and the United States missed an opportunity to remove his regime from power a decade before President Bush's son, George W. Bush, made the costly decision to send American forces back into Iraq to overthrow Saddam.

Chas Freeman served as Ambassador to Saudi Arabia throughout the Persian Gulf War. During his time there he experienced great frustration with the lack of direction given by Washington in regards to American objectives in Operation Desert Storm and later at the slow speed at which consideration or aid was given to the rebels in Iraq.

Read about Kurdish refugees who sought asylum from the U.S. in Iran in the 1970s. "The absence of a war termination strategy is the reason why the war never really ended" 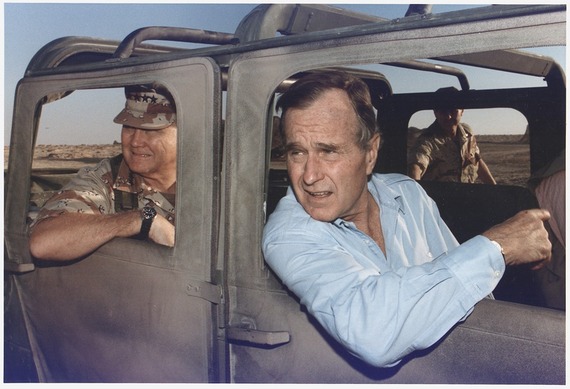 FREEMAN: [Commander-in-Chief, United States Central CommandGeneral Norman] Schwarzkopf and I were so frustrated at this [lack of instructions] that, on the eve of the counterattack in the air, I sent in a cable saying that, not having heard anything about war objectives, and having discussed it with General Schwarzkopf, unless instructed otherwise, these are the objectives he is going to pursue, which were what I thought the lowest common denominator was....

The absence of war aims, the absence of a war termination strategy, in my view, is the reason why the war never really ended. There was no political negotiation, no request for one.

In short, Saddam's military disgrace was never translated into a political humiliation for him. Hence, he [was] still in power, being able to claim, with some justification, that he stood against the mightiest force the international community could organize and survived, which is itself a sort of political strength.

The concern that I had in the region shifted immediately [after the signing of the armistice between Iraq and the coalition], rather, to two points, which were related: first, the absence of a policy with regard to the Shia rebellion in southern Iraq; and, second, the related issue of how to deal with prisoners of war and interned civilians from Iraq who were in the occupied area of southern Iraq.

Now when I say "the absence of policy," what I mean is that, since we had not defined the desired end state in Iraq, and since we had all assumed, including myself, erroneously, that Saddam would fall from power under the military licking that we had given him, we didn't know what to do when rebellion broke out both in the north among the Kurds and in the south among the Shia.

In the north, Turkish pressure to end the intolerable situation that was created by a massive flow of Kurdish refugees into southwestern Turkey forced the development of what became known as Provide Comfort, a relief and sanctuary operation for the Kurds. In the south of Iraq, the Shia rebellion, which had some assistance from Iran, was the subject of great confusion.

"By that time, the Shia rebellion had been crushed"

Privately, the Saudis, very early on, began to press very hard, through me and directly in Washington, for a joint Saudi-American program of assistance to the Shia.

The Saudis, despite their distaste for the Shia religiously, had come to the conclusion, correctly, I believe, that Iraqi Shia are Iraqi Arabs first and Shia second. They had certainly shown that in the conflict between Iraq and Iran. Nor did the Saudis wish to leave the field to the Iranians. And they saw support for the Shi`a rebellion as the key to dislodging Saddam Hussein from power.

It was six months, however, between March 1991, when the rebellion began, and September 1991 before Washington could muster a reply to these requests. By that time, the Shia rebellion had been crushed.

In the interim, in the absence of instructions, or perhaps carrying out instructions of which I was unaware, our military occupying southern Iraq, up through about June of 1991, routinely disarmed and interned any Shia who came across the line of control, thus draining the rebellion of its most effective military support.

The United States destroyed vast arsenals of Iraqi weaponry, including weaponry taken from the Shia rebels. Some of that weaponry was removed quietly and provided to the mujahedeen in Afghanistan, but most of it was simply destroyed. So, in effect, whatever our intentions, from an objective point of view, we were allied with Saddam in suppressing the Shia rebellion, contrary to Saudi desires....

"Requests for aid fell on deaf ears in Washington"

From many sources, but primarily from the foreign-intelligence side of the Saudi Arabian government, there were increasingly anxious, escalating requests for, first, American support for these Shia, in several forms, one of which, I believe, eventually was answered positively, although, as I said, six months late. And that was support in the form of a propaganda outlet for the Iraqi opposition to Saddam Hussein.

But, beyond that, they wanted military training, equipment, and the usual sorts of support that one would offer an insurgency, to be provided to the Shia. (Photo: AFP/Getty Images) 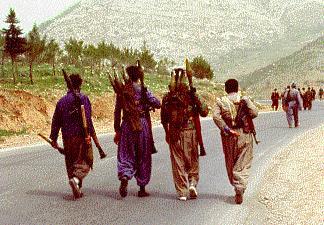 But, for whatever reason, the requests, which were serious requests, and which, as I say, were fairly constantly reiterated both to me and directly by very senior members of the royal family in Washington, were not answered. As they were not answered, a sort of tone of desperation crept into the requests.But, by mid-summer, it tapered off, as it was apparent that Saddam had successfully crushed the rebellion.

The American focus at the time, to the extent there was one, was on the Kurds, where General [John] Shalikashvili, acting for the European Command, was operating a very successful repatriation of Kurds to northern Iraq and a resettlement program for those Kurds in a protected zone of northern Iraq. But no one was apparently prepared to comes to grips with this group of Shia in the south.

The difficulty with the application of that thesis to the Shia rebellion was that the Shia were not attempting to secede from Iraq or establish a separate Shia state. They were focused on overthrowing Saddam and participating in national politics in Baghdad. So there was no inherent inconsistency between the two.

Now it is true that if the Kurds, who are Sunni, are removed from the Iraqi equation, the Shia, who constitute about 60 percent of the Iraqi population, would exercise a dominant influence in Iraqi politics.But if the Saudis, who are the great skeptics about Shia Islam, were prepared to accept the possibility of greater Shia influence in Baghdad, it seemed to me it ill-behooved the United States to object. Nor did I believe that support for the Shia would necessarily have led in any way to the weakening of the Iraqi state.

Now it is conceivable that the Shia might well have made common cause with the Kurds in demanding a more federal structure within Iraq. But I also fail to see why that is inherently objectionable. After all, the United States is a federal structure, and we find that it works well for us as a means of allowing a high measure of local autonomy and experimentation.

I think the real answer is that serious consideration at a high level was simply not given to the issue. So the arguments that I've just stated were, in a sense, beside the point, because there was no willingness to pay attention to the issue.

That, of course, in fact, may or may not have been the right decision. I simply note that we didn't have a policy. And that the public appearance of Saudi opposition to the rebellion in southern Iraq was incorrect; that, in fact, they had quite a contrary view. And that we failed to give it even a response, still less, apparently, adequate consideration.

Frankly, I was surprised by the willingness of the Saudis to put aside their religious doctrinal differences with Iraqi Shia and advocate support for them.