At the opening night of Letter of Marque Theater Company's Double Falsehood at The Irondale Center in Brooklyn, one of the creative minds behind the show was overheard telling an attendee, "This show isn't like Hamlet or Romeo and Juliet, where the audience at least knows the story. Most people don't know anything about this play! It's a risk." While Double Falsehood may have been first produced in 1727, the themes of morality, sexual ethics, and equality (in regard to both gender and class) which were explored centuries ago remain as relevant as ever in 2016. As directed by Andrew Borthwick-Leslie, this new production features moments of laugh-inducing comedy alongside provocative tragedy, all performed by an energetic and talented cast. The end result is a play which, despite being over 300 years old, hasn't lost its ability to both entertain as well as to bring out some timeless emotions.

Double Falsehood is considered to be a "controversial" work -- not so much because of its content, but rather for the debate over just how much of the play was actually written by Mr. Shakespeare. It's an emotionally charged debate that has been studied, argued, and revisited through the years. What does seem to be agreed upon is that Double Falsehood is an adaptation of a truly lost play by Shakespeare and his collaborator John Fletcher known as Cardenio, which is itself an adaptation of a subplot of the Spanish novel Don Quixote. Shakespeare expert Lewis Theobald is regarded by some to be the actual author of Double Falsehood, with The Bard credited as an "influence". Other voices have argued that Shakespeare and Fletcher co-authored Double Falsehood outright, with Theobald's role being more of an "editor" with minor contributions. Most recently, in 2015, the play was determined by researchers Ryan L. Boyd and James W. Pennebaker to have the right to be called a bona fide work of William Shakespeare, while still giving some credit to Theobald and Fletcher as well.

Regardless of the authorship dispute, there's no doubt that fans and scholars of The Bard will recognize Shakespeare's distinctive elements within Double Falsehood. These include the writer's flamboyant use of metaphor and trope, the famous soliloquies, and the equal complexity of both the male and female characters. Those characters include Julio (Zach Libresco), a young man of "modest" birth and son of Camillo (Tom Giordano). Julio loves dark-haired beauty Leonora (Montana Lampert Hoover), daughter of Don Bernardo (Ariel Estrada)-- and she feels the same about him. Contrasting with Julio is Henriquez (Adam Huff), the privileged son of Duke Angelo (Nolan Kennedy), brother of Roderick (Welland H. Scripps), and more than a bit of a rogue. Henrique sexually assaults lovely local girl Violante (Poppy Liu), propelling her to flee to the countryside. He then courts Leonora, completing the "double falsehood" of the play's title. The climax of the first half of the play comes with a sword fight between former friends Henrique and Julio. Julio, defeated, ultimately goes into exile, while the despondent Leonora seeks refuge in a nunnery. Cross-dressing, heady confrontations, and the re-working of family dynamics lead to a conclusion (expertly realized by the director and cast, by the way...) where a traditionally "happy" ending lies alongside a more disturbing one. The playwright's version of "justice" is served at this conclusion, although modern audiences will indeed be ready for a post-show debate or at least discussion.

For Double Falsehood -- or any other 18th century play, for that matter -- to succeed in 2016, the cast and creative forces behind the piece must have great respect, bordering on affection, for their source material. Indeed, this young and dynamic cast proves that they have it. The original dialogue stays intact. However, while being loyal to the author's words, the cast also seems to be simultaneously aware of the play's archaic yet deliciously over-indulgent language. The players clearly have fun with it, and they invite the audience to do the same. An example is when Julio is waxing poetic to Leonora about her beauty:

Venus will frown if you disprize her Gifts,
That have a Face would make a frozen Hermit
Leap from his Cell, and burn his Beads to kiss it;
Eyes, that are nothing but continual Births
Of new Desires in Those that view their Beams.
You cannot have a Cause to doubt.

(True, most people don't speak like this anymore, but in a culture where "LOL", "OMG", and "IDK" dominates our lexicon, it almost makes this author wish we DID return to more flowery language!)
Of course, dialogue alone doesn't make a play, and it's more than just quaint references to "artless love" and "one thousand perjured vows" that makes Double Falsehood so successful. As a testament to the talents of the cast, even the wordless acting makes an impact, with the final scene perhaps being the quintessential example. This production also features some priceless directorial touches. One segment features a trio of singers, complete with ukulele(!), who break into an unexpected musical number. It's deliciously corny... and absolutely hilarious. The "movable set" design is an effective touch, as are the framed "windows" which transform into living animation cells. The play's eclectic costume design serves the play very well. The older male characters wear 18th century-style tricorne hats and waistcoats, and the younger ones wear fashions of an undetermined style, blending vintage and modern -- although, to be honest, no one would look twice if these trans-generational fashion hybrids were worn on the streets of New York City today.

So... To answer the question: Was bringing the unappreciated, controversial play Double Falsehood to the stage a "risk"? Well, maybe. But as it turned out, this was a "risk" well worth taking! 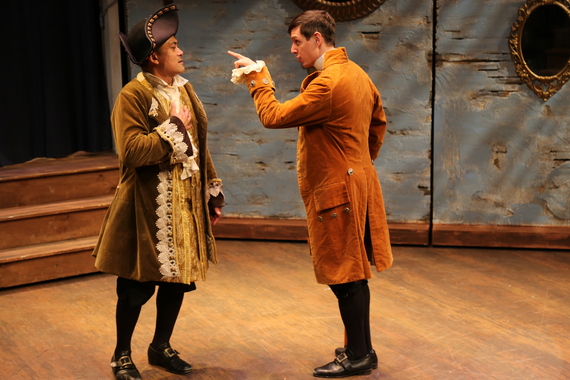 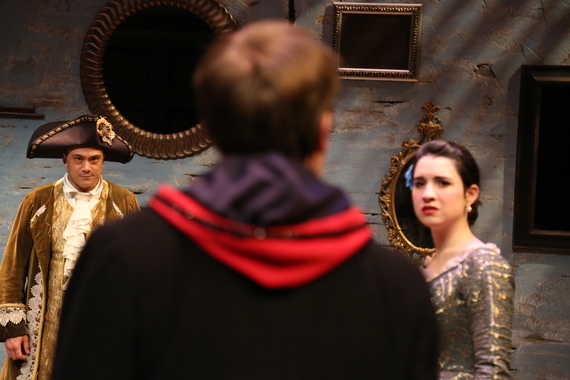 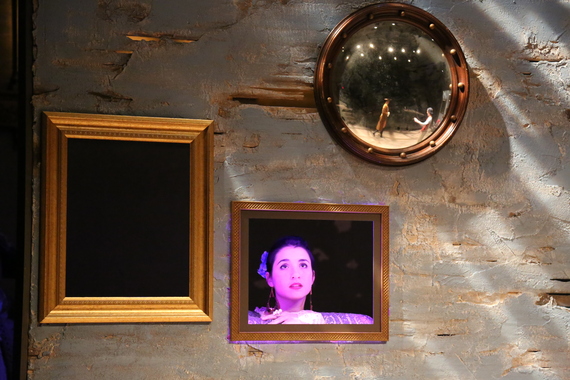 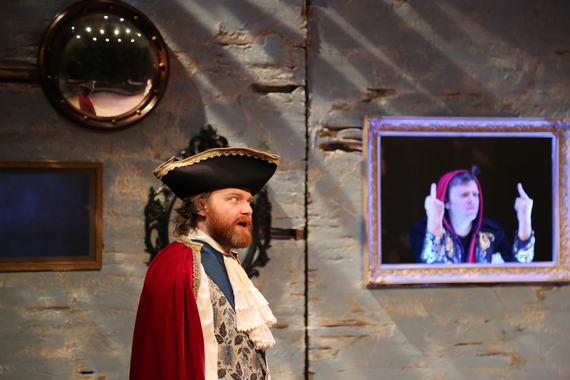 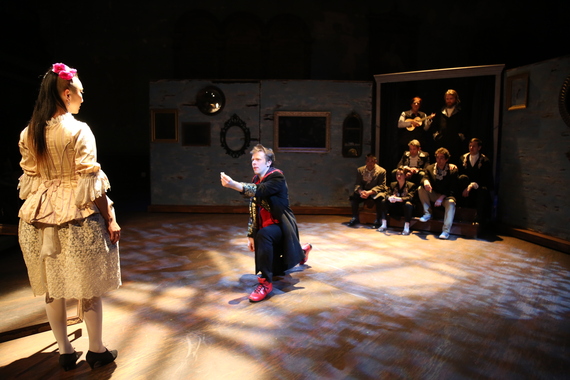 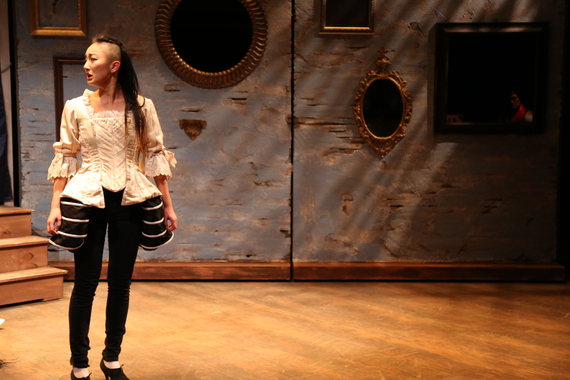 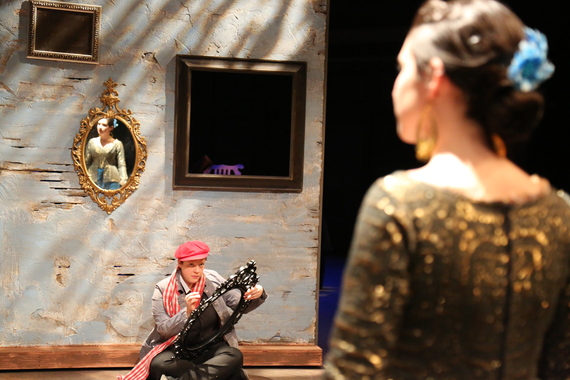 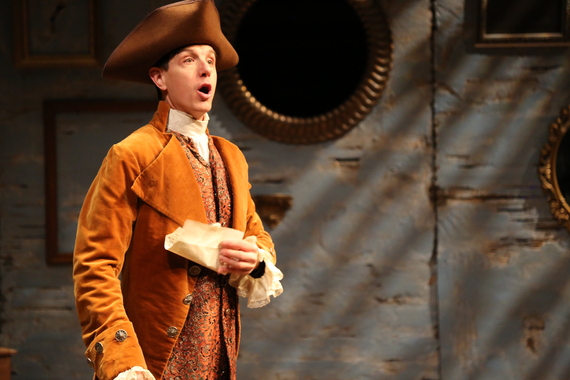