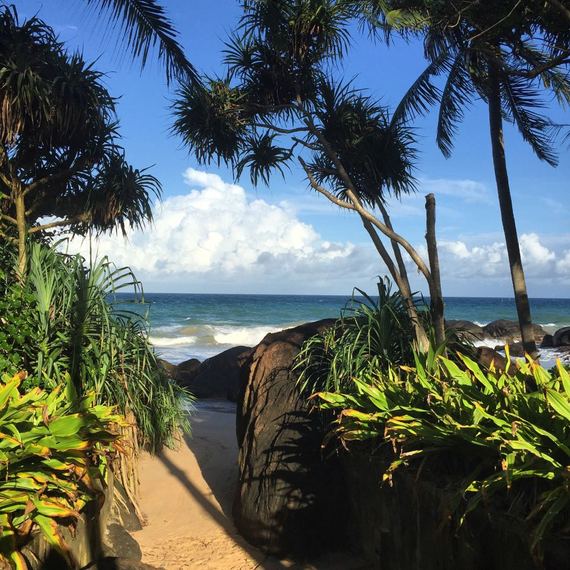 I know it's 2015 and we don't write love letters anymore, but this one is a little different. It's not coming to you on a pigeon or via a postman, but directly to your computer or phone screen. And if you agree with Dumbledore when he said:

Happiness can be found, even in the darkest of times, if one only remembers to turn on the light.

We don't choose which part of the world we are born into. It's not a decision we get to make until we are years out of utero. And sometimes this decision may be already made for us; if you end up becoming a refugee and have to take an unsafe boat and be in the mercy of the hands of smugglers, because:

no one leaves home, unless home is the mouth of a shark, you only run from the border, when you see the whole city running as well. You have to understand, that no one puts their children on a boat, unless the water is safer than the land.

But whatever the reason may be, humans like you and I are strong, we are courageous and we wait it out until enough is enough.

They (neuroscience research) say that humans are the only creatures who are able to empathize with other fellow humans because of the cognitive functions bestowed in our grey matter. We have evolved, or being made this way  --  which ever truth you believe in -- to be able to feel the pain of another human's struggle, to be able to rejoice in joy of another human's triumph. And this is to me is truly what makes us human -- even when we are miles away from them and just watching events unfold through a TV screen or a twitter feed.

Last week was an excellent example of this cognitive phenomena. A massacre in Paris, a car bomb in Beirut, an earthquake in Japan, and countless other attacks where we humans have given into aggression (which is controlled by a very primitive part of the brain, and not one where higher cognitive functions such as analysis or thought processing and social responsibility take place) makes me wonder if we are turning the evolutionary clock backwards and becoming less human.

But the good news is that the neuroscience is in our favor. We can be trained to be more peaceful, to be more compassionate, and to be kind. And this is what we need to prime on.

So let me tell you a story of this science in action. I was born in Sri Lanka, a country that has a written history dating back 2500 years. A country that has embraced the philosophy of Buddhism for millennia. It was known by Marco Polo centuries ago as "undoubtedly one of the finest islands of its size in the world" and by Sir Arthur C. Clarke who said that "The island of Ceylon (former name) is a small universe. It contains as many variations of culture, scenery, and climate as some countries a dozen its size."

So what could possibly go wrong on this paradise island, right? But after centuries of colonization by the Portuguese, Dutch and then the British (who undoubtedly added vibrance to the mosaic of culture and heritage we have in Sri Lanka today), also came the downside of colonialism and an era of "divide and conquer." This political culture alongside numerous bad and questionable policy decisions on part of the existing leadership at the time and the state of civil dismal, led to a 30-year-old civil war, which only ended when I turned 18.

So I was part of a generation that was born and raised during a war, and although I may not have lived on the frontline, the effects of this mass atrocity of three decades will forever be part of my childhood.

Living in the cosmopolitan capital city of Colombo didn't mean I was safe, so I know what it is like to go to school every day and not know if I would make it back home safe, or if my parents would get back in one piece from work. The common occurrence of suicide bombs (especially since those responsible invented the suicide vest itself) in urban areas made me grow up to have what I call a "bomb sound reflex", which is why even today if I hear a loud bomb-like sound, my first instinct makes me question if it was a bomb.

The first time I witnessed the catastrophic effect of this type of bloodshed was when I was five and in kindergarten. My nanny and driver picked me up from a scene of a horror movie; what looked like to me at that time the largest traffic jam of cars and people filled in red blood stains on their clothes that I had seen.

That day, my headmistress lost her husband in this bomb that blew up the Central Bank and the World Trade Center in my capital city. So humans from America, I know what 9/11 must have been like for you; we had our World Trade Center also torn apart.

Many years and explosions later, when I was Prefect in senior school (the student leadership that in-charge of the discipline of the school, much like in Harry Potter), I had to deal with, what is to date was the most challenging leadership role I have had to ever encounter.

As the country was in a very volatile position of ending the civil war through military means, so was the use of innocent civilians as human shields in the war zone and those out of the war zone as collateral damage. And therefore being given training on how to act during a bomb or explosion was something we were taught even as Prefects in school, and checking the bags of students as they entered school every morning for anything suspicious became a routine procedure. But much like fire alarms and drills, you always wish you never had to use what you learned on how to deal with it because you didn't want it to ever happen.

But one day it did, there was a loud explosion, a suicide attack targeting a high ranking official, and myself together with my fellow Prefects had to follow what we were taught, and more importantly keep my classmates calm and safe until the chaos ceased.

So I may not have been in Paris with you or in Beirut or in Baghdad or wherever else your dignity was shattered through fear, and you may not have had the training I was given on how to deal with such a situation, but if you came out of this experience stronger than you were before, I salute you.

There comes a day when these type of conflicts see their natural demise or an intervention that does the same job, and until then you need to be hopeful but never hateful.

Sri Lanka is and will always be the beautiful island I grew up in, regardless of which ever part of the world I decide to ever reside in the future. And even when time and again, we occasionally have to deal the distress of people driving wedges among communities; may it be through a political agenda or otherwise, I will always voice my opinion on how we need to stick together as that stunning mosaic -- as serendipity. Because our differences make us beautiful and our similarities make us one, and both in conjunction is an unstoppable formula for success in every facet of life and development.

So if you're a peacemaker, never give up on that role because the world needs more of you.

So myself, together with millions of others around the world who believe in peace over conflict, love over hate, and kindness above all are with you every step of the way as you put your life back together. Let me just tell you that it is in our biology to grow stronger and more resilient after every adversity, so as it is for a bone to grow back to be much stronger after a fracture. If you don't trust me on that, just google how bone remodelling works, and you will get your answer.

So today and tomorrow and until our days are numbered as inhabitants of this planet we call home -- a planet we are renting from nature and must thus not destroy -- I hope you remember two songs, "We Are The World" (not just je suis paris but nous sommes le monde) and "We Are Family."

Because every life matters, whether it is reported in the media or not, or whether Facebook decides to have a "Marked Safe" feature for a specific catastrophe or not. Because if you cut any of us open, you will see the same red blood flowing through our veins -- it's biology. And don't let society or anyone else tell you otherwise.

I hope the results of the recent events don't shut your doors to those who may not even have what you have, a home. I hope it only strengthens you to open your doors wider to create an army of kindness. Like the way countless Sri Lankans opened their doors to strangers and friends who were targeted because of race, ethnicity, political beliefs or as a result of any other human-made social construct.

This is my love letter to you, and I hope it will open your heart to transcend borders and reinvigorate what humanity is all about.

Ayubowan. Wannakkam. Assalamu alaikum. These are all just different ways we say, may peace be with you and good vibes all the way.

From where there's sunshine 365 days (aka Sri Lanka),