Remember that feeling of excitement as a kid when Mom or Dad said these three words:

Nowadays, those three words make me think about bills I need to pay, crap catalogs I need to recycle and Meg Ryan smirking at Tom Hanks.

A Letter from Your Pen-Pal.
Oh my God, the best days in a young girl's life were the days when there was a letter in the mailbox from a pen-pal. I have two that I remember very well, one was my friend Valeska who I had gone to elementary school with until her family moved back to Germany; how cool to get something from another country that was stamped AIR MAIL with exotic looking stamps on it. Handwritten pages on pretty stationary that included important questions like "how are you?" "what is new" and me asking "can you send me more of that Nutella stuff in the mail?" In high school I had a pen-pal named Dee who I found in the back of a magazine that was devoted to The Rocky Horror Picture Show. We wrote pages and pages of endless odes to each other about how great Tim Curry was.

Tapes from Columbia House.
Twelve tapes? For ONE PENNY? I have vivid memories of the epic day in the '80s when I received a box filled with Hall and Oates, Julian Lennon and Huey Lewis and the News. I also have vivid memories of my parents reeming me for not mailing back the little postcard in time with the box marked saying please do not send me this months selection of Live Bullet by Bob Seger. I'm pretty sure I still owe Columbia House thousands of dollars. 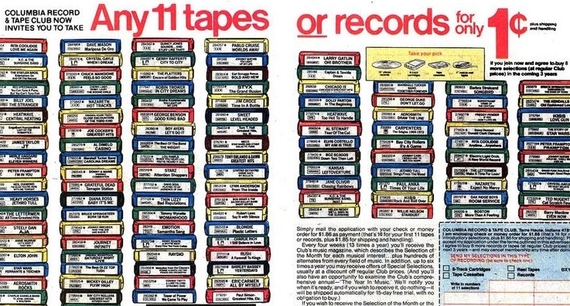 Magazines.
Lounging in my pink bedroom with my Seventeen, Young Miss or the ultimate -- Sassy magazine - was my pre-teen/teenage "me time." These treats that came in the mail inspired my fashion/make up/prom dress choices...once they were read to death, they were cut up and used to create many a glorious collage page in my diaries.

A Postcard from Your Grandma/Friend/Aforementioned Pen-Pal.
I loved staring at the pictures on the front of postcards from people and reading the little blurb on the back. Greetings from Yosemitie! Disneyland! Canada! Who knew a flat piece of paper with a fifteen cent stamp on it could bring so much happiness. Awww, you wish I was there? So do I.

Fan Club Paraphernalia.
Do fan clubs still exist? I was a proud member of The Muppet Fan Club and had an autographed 8x10 photo of my favorite muppet that hung on the back of my bedroom door. Kermit? Nope. Miss Piggie? Nuh-uh. Swedish Chef? Bork-bork-bork! Did I mention that he took the time to autograph it? Membership had its privileges.

That Thing You Ordered From the Back of a Comic Book.
X-Ray Specs! Whoopie Cushions! And the one that came in my mailbox - Sea Monkeys! Was every kid as disappointed as I was that your Sea Monkey family didn't look anything like this and was indeed just a bunch of brine shrimp -- whatever that was? Anyways, it was still exciting to get powdered dehydrated sea life in the mail. 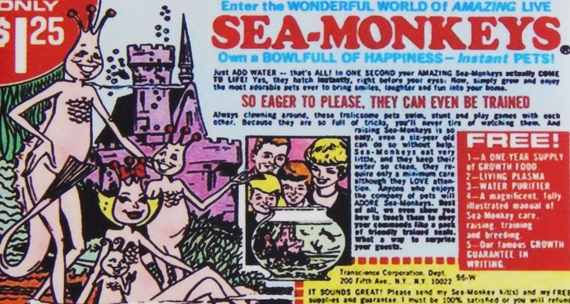 A Chain Letter.
Oh, the pain your wrist felt after tirelessly writing out this handwritten letter ten times! Getting one of these in the mail was part joy and part giant eye roll, but it was a burden that pre-teen girls had to bear. The satisfaction of popping those puppies in the mail with the warning DO NOT BREAK THE CHAIN at the end gave such a sense of power.

Love Letters.
Because no email, text, or epic '80s phone conversation could ever compare to getting a handwritten letter in the mail. I've hung onto a handful of these awkward and sweet odes (that's not weird, right?) and when I read them I'm taken back to bawling in 1988 when the guy I had met on spring break/known for 48 hours was getting on a plane back to go home Michigan. Getting one of these letters in the mail from a boy was EVERYTHING.

Suddenly I feel inspired to write my old B/F/F Susie a letter. Or send her a postcard from Portland. I can now buy my own Nutella but it sure isn't as exciting as getting a jar in the mail from Valeska. And get ready to bust out your Bic pen, bubbly handwriting and notebook paper...because you don't want to be the one to break the chain, right?

Lori's website, Drawn to the 80s, is where her 5-year-old drew the hit songs of the 1980's. Her blog, Once Upon a Product, is where she writes about important things like beauty products and her Mick Jagger obsession.