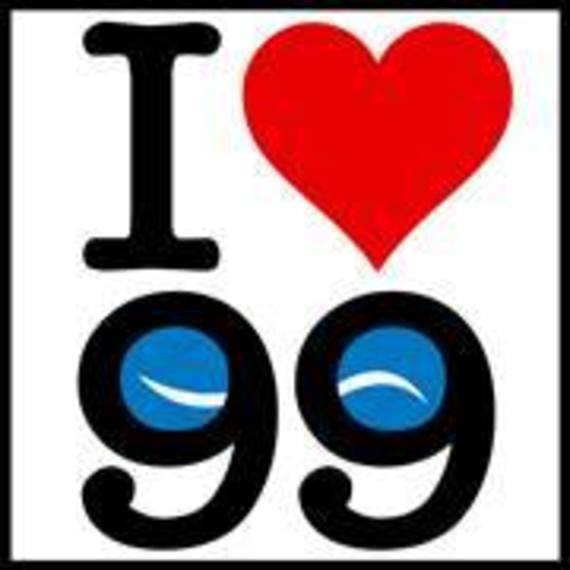 Here we go again. Just like the rabble-rousing "Waiver Wars" of the mid '80s -- union meetings, passionate and heated rhetoric, mano-a-mano infighting -- all about the well-being, membership, management, and dare I say, survival, of Los Angeles's vital 99-seat theater scene. Check it out. As of this writing, there are 5834 members of a closed Facebook group called "Pro99", created by 24th Street Theatre's Jay McAdams and stating: "Pro99 is a community group who supports preserving 99-seat theatre in Los Angeles." It's a big deal in this town, run primarily by the film and television entertainment industry, where I like to say, "theater is the bastard child."

All the big boys were there at Saturday's "community town hall" meeting sponsored by TPLLA (Theatrical Producers League of Los Angeles) at the Renberg Theatre at the Village on McCadden Place in Hollywood: Joe Stern from the Matrix Theatre, Gary Grossman from the Skylight Theatre, John Flynn from the Rogue Machine Theatre, Tom Ormeny from the Victory Theatre; these four artistic directors alone have probably spent well over 100 years amongst them, toiling in the dark of LA's "intimate" 99-seat theaters. Ron Sossi, from the Odyssey Theatre Ensemble, was there too, the self-proclaimed "dinosaur" of the group, having produced theater in LA for 46 years himself. The big girls were also there: Marilyn Fox from the Pacific Resident Ensemble in Venice, Kitty Swink, former SAG-AFTRA Vice President and currently on the Board of Antaeus Company, Jeanie Hackett of The Workroom and also formerly of Antaeus.

Plus, there was young, and younger, artistic blood too: Stephen Sachs and Simon Levy from the Fountain Theatre (not too much younger!), Daniel Henning from the Blank Theatre Company, Tim Robbins from The Actors' Gang (yes, that Tim Robbins!), the aforementioned Jay McAdams, Executive Director of Theatre at Boston Court Michael Seel, independent producers Gary Guidinger and Linda Tolliver, as well as the Artistic Directors of most of LA's 99-seat theaters: The Celebration, Sacred Fools, and many, many more. And of course, a good number of the rabble-rousing AEA actor membership working in 99-seat LA theater for decades was there too, right next to their brother and sister stage directors, designers, playwrights, technicians, stage managers, volunteers, etc. The house was full, with the overflow crowd listening to the inner Renberg proceedings from the outdoor courtyard. As one speaker noted with pride, "all the seats were comp-ed".... free! 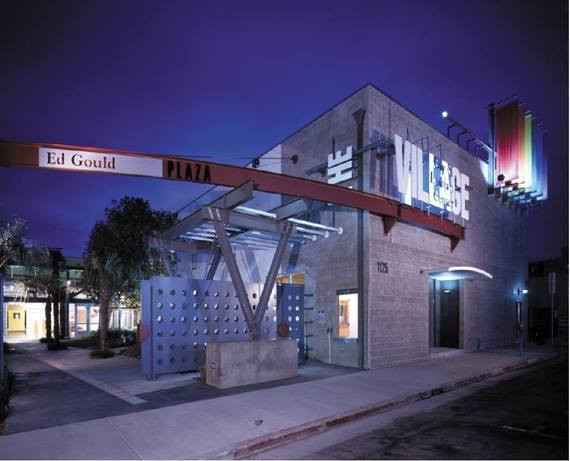 The issues at stake were life-threatening... at least to most of these long-time LA theater practitioners. AEA (Actors Equity Association, with corporate offices in New York), had recently drafted a referendum to be voted on by the West Coast AEA membership to end the current "99-Seat Theater Plan", drafted in 1987, which was legally hammered out with the Union leaders and its membership, along with an early version of TPLLA, and which had provided the basic rules and regulations under which AEA members could work in small, intimate theaters in LA (under 99 seats). Of course, the main issue has always been, and still is, fair pay. If you don't know already, most of the union actors that you see in local 99-seat LA theater work for less than "scale", the union-negotiated contract fee. In fact, they work for far less than scale, almost for nothing. The "99-Seat Plan" offers them a token stipend of anywhere from $9-$14-$25/per show, paying them, perhaps for gas, and probably little or nothing for rehearsal. Some theaters offer more pay for their actors, depending on the size of the budget of the production, and some theaters offer "profit sharing", if a show ever breaks into the black, which is... not too frequently.

Equity actors do not have to do theater in this film and television town. However, many do so voluntarily and enthusiastically, for two main reasons. First, they may get "seen" by casting agents, managers, talent agents, etc., who could hopefully lead them to "real" work in the well-paid "industry". Second, and importantly, many actors work in 99 seat theater for the artistic opportunity it offers them. Although the Equity-approved 99 Seat Plan allows for actors to leave theatrical productions for better paying TV and film work, no matter how late into the rehearsal or production process, some actors actually choose to do theater work over TV and film work because... it offers them a more challenging and satisfying creative experience. A Latino actor stood up at the Renberg meeting and passionately spoke to the crowd about his having turned down yet another typecast Latino role on TV for a more artistically-challenging role in a 99-seat theater. He had tears in his eyes as he begged most of his light-skinned brothers and sisters to pick up the phone and tell their fellow actors of color about the details of the town hall meeting and the gravity of the situation, and to show up at the Equity meeting scheduled for Monday February 23 at the Sportsman Lodge in Studio City. 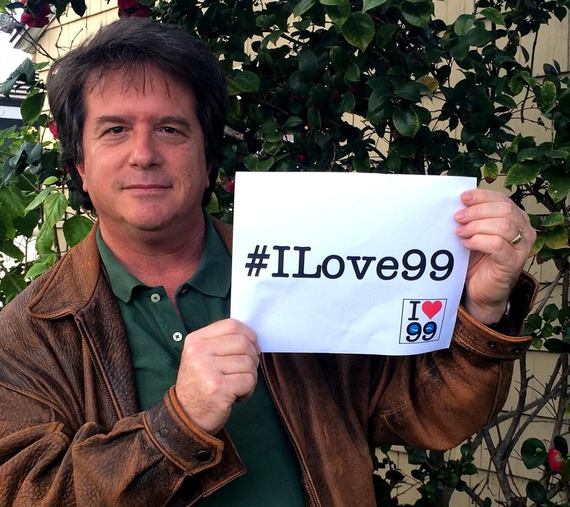 According to many in LA's 99-seat theater world, Actors' Equity does not really care about the wellbeing or survival of Los Angeles' fertile and exciting theater scene. What they care about, as all unions should, perhaps, is more about the pay scale of their working members. Along with the benefits and safety conditions in the workplace. Now you may be all for labor unions protecting the rights of its members. I am. Without them, we'd still have child labor abuse and horrible working conditions in our country. But as the Pro99 thinking goes, the Actors' Union is not representing the interests of its LA actor membership by tampering with the current 99-Seat Theater Plan. And that by proposing a new, simpler, "self-producing" plan with little actor protection built into it, the Union's new plan (or non-plan), in all likelihood, could veritably destroy, both successful and struggling, existing theater companies, as well as freeze the membership of many functional "membership companies" (often dues-paying), decimating theater in one of the healthiest and most vital cities on our planet. What TPLLA wants is simply more time to talk about, and hammer out, a new, improved 99-seat theater plan with AEA. But a big problem is that members of TPLLA, even though still currently dues-paying members of AEA, are excluded from the vote, and often from the conversation, because of what AEA considers a "conflict of interest."

Because somewhere along the battle lines, AEA has practically "condemned" these TPLLA members as "producers," the evil exploiters of their disenfranchised membership. To my knowledge, this is simply not true. Many so called "producer"-speakers at the Renberg meeting stood up to say that they saw themselves merely as "artistic facilitators." They simply did what was necessary to run a theater. Although many entered the field as union-paying actors, they soon discovered that they also had to run the box office, clean the toilets, do the marketing and publicity, write grants, pay the rent... all the things that it takes to run a small, non-AEA contracted theater (99 seats) in this, or any, town. Soon they discovered that it was more cost-efficient and practical to hire modestly-paid staff, or to recruit volunteers, to do these everyday jobs in the trenches of the theater's administration. Actors wanted to act, not to do these theater-maintenance and theater-running jobs, pay or no pay.

Most actors know the score; they act for free (or for Equity's small stipends) because they absolutely want to! They practice, explore, experiment, and improve their craft, by doing theater. When the one speaker told her fellow Renberg audience members that her friends were passing out at evening rehearsals because they were so tired from their day jobs, most of the audience simply replied, "Well, then don't act in 99-seat LA theaters. It's your choice. No one is forcing you."

Many of the "successful" LA theaters are operating as "non-profit arts corporations," exempt from paying taxes under their IRS-determined 501(c)3 letter of determination. This allows the theaters to apply for grants: federal, state, city, local, and foundation support, if they are lucky enough to find a helpful benefactor. However, the current climate for arts funding in America is dismal. In the 1970s, many small arts companies such as my own dance and clown companies, qualified for all these grants mentioned above. But now, arts funding is less available than ever before, often smaller companies lose out to larger, better-known entities like CTG (Center Theatre Group at the LA Music Center), South Coast Rep in Costa Mesa, or to mid-size theaters like the Geffen and the new Wallis Annenberg in LA.

None of the TPLLA producers at the Skylight or Fountain are making a killing. They are lucky to survive, paying themselves very modest annual salaries, if any at all. Theatrical producers like Joe Stern, Ron Sossi, and Tim Robbins have often funneled their personal earnings from working "in Hollywood" into their non-profit 99-seat LA theaters. Robbins, at the Renberg meeting said that he personally "lost hundreds of thousands of dollars" producing theater at the Actor's Gang. Then he smiled and changed it to "invested in", rather than "lost." His audience laughed aloud with self-recognition. 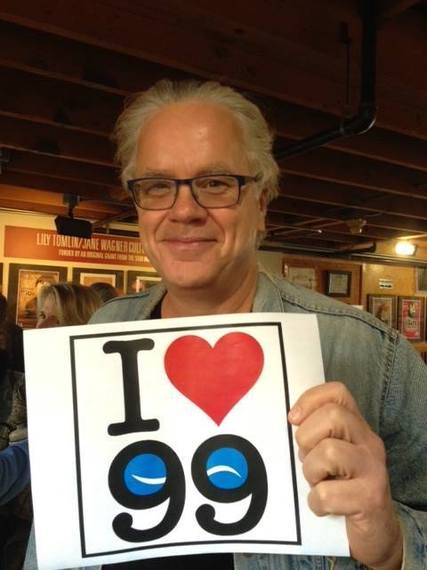 But this is no laughing matter. The February 23rd meeting will already be old news by the time you read this piece on HuffPost. Many AEA members are very dejected and cynical about the meeting in Studio City. They think Equity has already determined the outcome of the vote, personally phone tree calling its non-Pro99 seat membership to vote "yes" for the dismantling of the current 99 Seat Plan. Many AEA West Coast actors don't work in Los Angeles' 99-seat theaters -- or even know what the issues at stake are. They are simply voting for their union's party line, like all good union members are supposed to -- without knowing that their vote could eliminate the 99-Seat Plan altogether. When TPLLA asks to mail out its alternative argument, which just asks for more dialogue and more time to revise the current plan, AEA won't give out their mailing list, or even mail out a full statement by Pro99. It's a contentious and explosive divide between the Actors' Union and its LA membership. Not a pretty picture or a promising forecast for the survival and vitality of LA's intimate theater scene.

Here are many of the details, which are too lengthy to include verbatim in this post. But please read them if you are interested:

A statement by John Flynn, Artistic Director of the Rogue Machine Theatre (along with Kitty Swink, John Pollono, and Jeannine Wisnosky Stehlin), laying out all the issues at stake from the Pro99 point of view here.

And if you want to get involved in the passionate back and forth on this important issue to the survival of the current 99-seat Los Angeles theater, please go to these sites:

As for me, what do I know? I'm just a self-producing solo performance theater maker. I've supported myself by being lucky enough to teach at USC's theater school for 29 years. I'm now "semi-retired". Hooray! But I've been writing, performing, directing, and "dramaturging" one-man and one-woman shows for 33 years in LA. I've watched the Los Angeles theater community come together at town hall meetings like last Saturday's for at least 28 years. Other than our annual Ovation Awards or our now-defunct LA Weekly Theater Awards, this is what "community" means. Hot heads, committed theater artists, all working for little financial reward, in an unfortunately dying medium, "the theatuh" -- with or without the support of their own actors' union -- but all passionately breathing and believing that "theater still makes a difference"!