There are hundreds and thousands of articles for people who have experienced bullying behavior. There are lists of what to do and what best not to do; there are studies on victim's personal traits which can attract bullies; there are recommendations on how to avoid being bullied and so on and so on.

It's great we have all this useful information. But most of it only speaks about the victim and therefore are based on the wrong logic. Where the responsibility for a bullying situation is to be taken on by the victim - by the victim's "mistakes", "behavior" and "personality". When we address the victim only, we create a reality where other participants are passive or even absent. This certainly falls short of addressing the problem.

A victim never makes a decision to be bullied. Even if we talk about victimization or provocative behavior, someone from the crowd always makes the decision. It would be helpful to create a manual for the provocateur and participants who are susceptible to falling into typical roles in a bullying situation. This manual could act as a 'recommendation on avoidance' for people who are ready to take on their role during a bulling event. This manual could potentially be helpful for people who have already been involved in bullying or who have witnessed bullying and did nothing. Potentially it could answer some unasked questions from people who feel something is wrong and don't know how to change themselves. Finally, this manual may help people who are brave enough to recognize their problem and who would like to take a look into inner deepest self - their abyss. Such individuals are rare, nevertheless a manual for bullies should be written.

Let's dive into the abyss?

During a bullying situation the affiliated crowd splits into five sub-groups, according to the roles taken on by each group member. There is no rule defining the exact quantity within every subgroup and these quantities may vary. 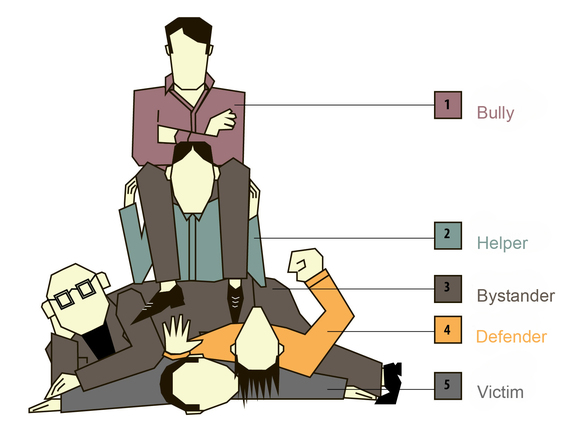 With almost 50 years of research on bullying, brand new data keeps appearing which turns our expectations and beliefs about it upside down. For instance, recent studies revealed some curious results. Many bullies never do anything bad to a victim themselves. They are adequately adept at putting chestnuts in the fire and fueling a quarrel, but Helpers account for all the physical actions and all the bullshit. It means that Bullies start the bullying but are able to stay out of the actual fight and look 'clean'. Clever, aren't they?

Early research has shown that many bullies had low self-esteem and tried to hide this fact from their peers. But recent data has disproved this. A typical bully tends to have a reasonably high self-esteem and is quite confident in himself/herself. There is a controversy among researches regarding impulsiveness: many studies reveal that bullies realize what is going on and are completely aware of what they are doing to others. It suggests that there is more cruelty than the lack of control, and more sadism than the lack of empathy. 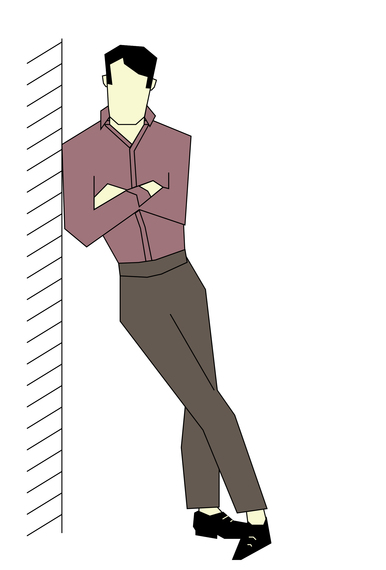 Risk factors for taking on the Bully role:

Helpers are people who are prepared to do any kind of 'dirty job' (also called 'active helpers'). Passive helpers are the people who support bullies and active helpers, but never act themselves. Helpers of a third type are the friends of bullies and other helpers who ignore the whole bullying situation as if it does not exist. Yes, unfortunately these are helpers too, because if someone pretends there is nothing bad happening and continues to befriend the main figures and supports them in everyday life,- this is clearly a message to bullies and others that "you aren't doing anything bad". This message really supports them to continue what they do. 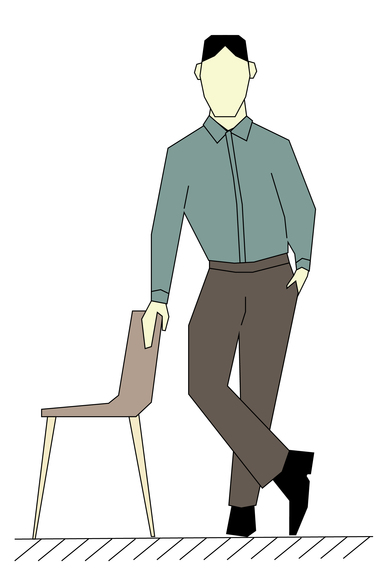 Risk factors for taking on the Helper role:

During a bulling event, one of the most popular myths bystanders believe in is that there is no need to do anything, because indifference, and not supporting the aggression, is actually helping the victim. But in fact, to witness a bullying situation does not help the victim in any way. A bullying situation creates a space in which a neutral position is entirely impossible. If an illusion exists that witnessing a bullying act is a defense of the victim, then your psychological defenses are working well in protecting yourself. This type of behavior is tolerated by Bullies and Bully's Helpers so that, "This is comfortable enough for me to be indifferent". Furthermore, psychologically, bystanders are never indifferent inside, because witnessing the humiliation and psychological torturing of a human being ignites strong feelings in everyone involved. 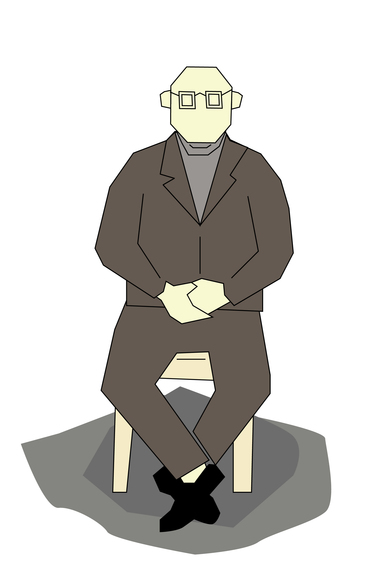 Risk factors for taking on the Bystander role:

Now that bullies, bully helpers and bystanders are defined and understood, what can one do to prevent themselves from falling into one of these roles? How does one work through these risk factors? The following are some helpful tips.

1. Understand the benefits derived from being in one of these roles

Bullying prevention programs are available throughout the world, and are quite successful. The famous Olweus bullying prevention program in Norway, supported by the state, focuses on 'decrease benefits' and works with the active players - bullies and helpers - in the bullying situation. This very effective method stops bullying firstly by the many benefits which can be achieved outside the bullying rather than by means based on other people's sufferings. Second, being a bully is shameful and doesn't add anything to one's social status, therefore a person could look for another way to fulfill your needs. 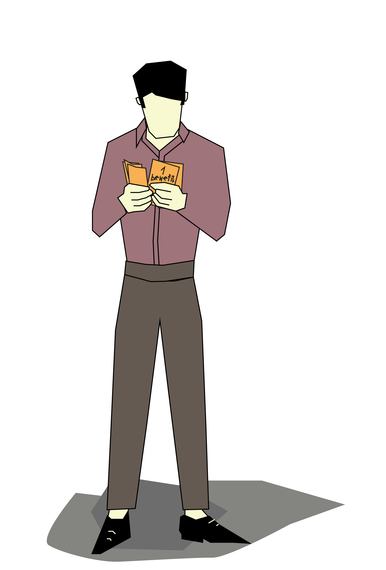 2. Be aware and engaged in your traumas and negative past experiences. Don't be afraid to ask for help if needed

Most active players in the bullying situations are abuse survivors and/or have experienced psychological trauma. Instead of assuming a role of a victim, they may assume another role as a means to work through their trauma. With professional help this pattern is curable but left unchecked trauma victims will potentially return to their past painful experience over again and again. Trauma affects a person's life far deeper than participating in any bullying situation and with an appropriate support by a professional your life could change beyond expectations. 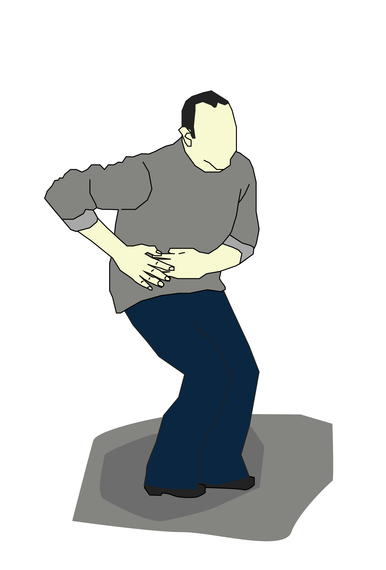 3. Recognize and embrace the denied aspects of behaviors. Bring your skeletons out of the closet and have a dialogue over tea.

Suppressed or ignored aspects of our personality could be a result of locked up skeletons. For example, a person who has sadistic tendencies may not see this part of themselves in the mirror, but instead, transfers this denied aspect onto others and blames or punishes them for it. This is called projective mechanism. It doesn't mean all active players in the bullying situation are sadists. If there is a socially unaccepted side to ourselves, it will always be present and uncontrollable unless we take a deep look into ourselves and adjust our self-perception in order to accept all aspects, even the ugly parts. And to handle them in a responsible manner. 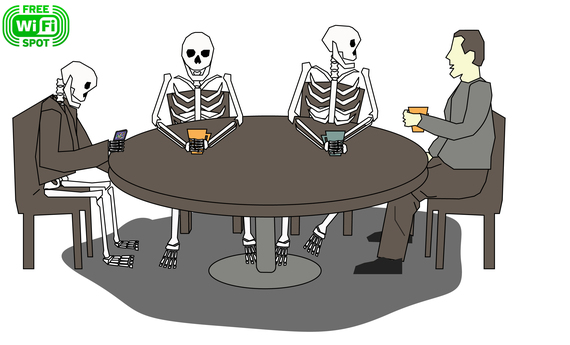 Try to take control and understand what is going on at that moment and which process in your internal world is being served by the intended action. Our actions are never 100% spontaneous. There is a circular linkage between impulse, feeling, thought, action. Many people just jump from impulse directly to action and miss all the subtleness in between. Here's some magic: if you stop and think before you act, the need for the act could vanish into the air. For instance, if you think about your anxiety instead of an acting to reduce it, it can abate by itself just being conscious of it. This affords you many other opportunities to deal with it better. This is how it works. So let the magic happen! 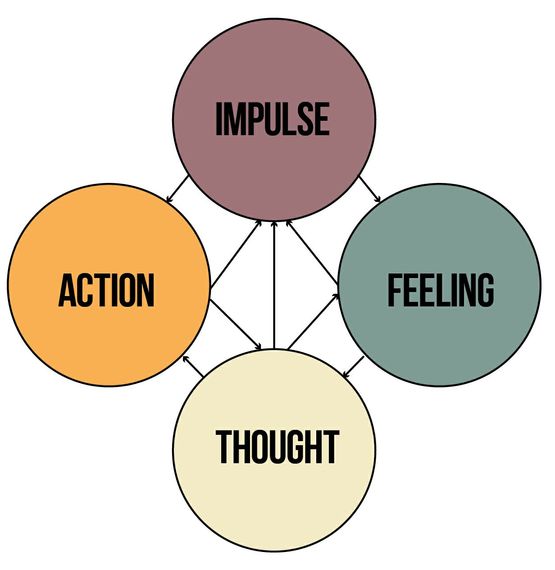 The afterword is my favorite part. It always gives room for my thoughts and feelings and sometimes it's the only thing people remember from a posting. So why did I decide to create a "manual for bullies"? This is a frequently asked reasonable question. Moreover, why create a helpful tool for aggressive people most likely not to be sorry, especially bullies who are quite satisfied with their behavior? And probably would get angry about a self-help manual.

I believe in humanity. This may sound pompous, but it is a foundation of my work. Different people come to me and seek help. They are victims, perpetrators, witnesses or even formal criminals. Not all of them are egoists. Many of them truly want to become a better person and are ready to invest in this change. It is always a miracle, and, on the other side, it is quite natural. They learn to appreciate others, to feel sorry and ashamed for what they did, and to take responsibility for the damage they caused. And they learn to choose a different path.

This does not happen every day but it gives me much joy when it happens. Hopefully more and more people will seek help since today's society and the internet raises awareness about this issue. Not everyone who was born on the dark side chooses to belong to the dark side. Some just choose to fight the evil.

Stopping bullying all over the planet is absolutely impossible. But awareness of what is going on can help us more and more about ourselves. That's our secret domain and way to walk out of a grey zone.
Like a tail which is wagging the dog, such unknown circumstances.

I invite you to turn around and to look at your tail. 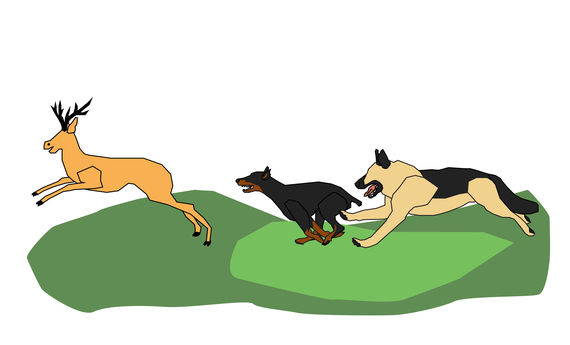 Maybe it's an ordinary tail?

Or maybe it increases you risk of getting into a pack of dogs chasing a deer?

And if you understand everything about your tail, it won't wag you any more!

Many thanks to Kimberly P. Fox, the friendliest editor

Psychotherapist and a woman with special needs