If you ask most New Testament scholars whether Jesus was likely married the mantra is a firm and dogmatic "no" -- there is not a shred of historical evidence that he was ever married or had children. The very idea is baseless speculation at the best and cheap Holy Blood, Holy Grail/Davinci Code sensationalism at the worst.

The argument most cited is that if Jesus had been married we would have surely had traditions, both within the New Testament and the so-called "Church fathers" that such was the case. The silence therefore is deafening. Jesus lived a celibate non-sexual life. Most are quick to add -- at least the more "liberal" minded-- that they don't care a shred if he was or wasn't -- just that they don't think there is any evidence that he was.

This of course ignores the strongly dogmatic theological reasons the church clings to this day to an Ever-Virgin Jesus, parallel to a non-sexual Virgin Mary. The Holy Divine Son of God, and surely his virginally pure mother, never had sex. How could a Divine Jesus possibly leave a bit of his "DNA" behind, which would be the case with any son or daughter he might have had. 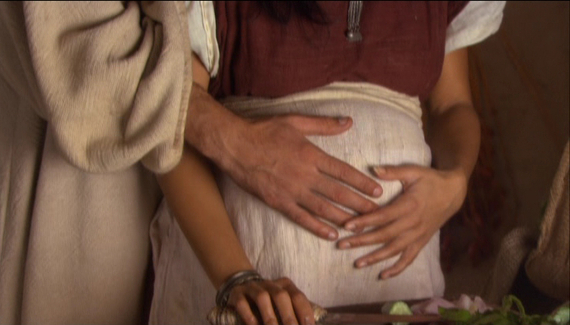 There are two problems with this view. First the argument from silence simply does not work when it comes to women and wives of Jesus' leading followers in the New Testament. We don't know the names of any of the wives of the Apostles, nor James the brother of Jesus, even though we surely can assume, based on the Jewish culture of the time, that they were married. Wives are seldom mentioned and never named, even though marriage is the norm.

Second, and more telling, there is strong textual evidence that at least hints if not affirms that Jesus was married -- and most likely to Mary Magdalene.

First, there is the apostle Paul -- who is our earliest literary witness to any form of "Christianity," who strongly advocates and encourages celibacy or the non-sexual life -- but only mentions himself -- not Jesus -- as an example thereof. And this in a section of 1 Corinthians, where he mentions other apostles traveling with their wives (even though these "phantom" wives are never named in any of our texts), and quotes Jesus to support his views on forbidding divorce. If Jesus had been celibate Paul would surely have appealed to him as his main example.

Second, in our earliest record of Jesus' burial in Mark, the mysterious Mary Magdalene shows up out of nowhere, not only listed with Jesus' own mother and a group of Galilean women, but clearly given first place and prominence. It is Mary Magdalene -- above even Jesus' mother or sister --who takes the lead in the Jewish burial rites for the corpse of Jesus -- both washing and anointing his naked dead body. This is not the position of an outsider, or even a close "insider," in terms of disciples or followers. This is an intimate honor and a duty reserved for ones closest relatives --particularly ones wife, mother, aunt, or sister. She appears and then disappears -- though in John she is clearly the lone "first witness" to Jesus' resurrection as well. Her disappearance is as strange as her sudden appearance. But then Mary Magdalene surfaces again in some of our second and third century gospels, as a prominent female leader, intimate companion of Jesus, and bearer of "secret" revelations. How is this to be best explained?

What one must always bear in mind is that the documents of our New Testament are overwhelmingly written in the second generation of the movement, a decade or even several decades after Jerusalem's destruction by the Romans in 70 CE -- after the original followers of Jesus are either scattered or dead -- including Peter, James, Mary Jesus' mother, presumably Mary Magdalene, and even Paul.

What we get in the case of Mary Magdalene are hints of her prominence, but also a muting of her status and role. A similar phenomenon occurs with James, and the Jesus family more generally and their dominant leadership in the movement for its first 40 years. If all we had were the N.T. gospels were would hardly know James or his mother and brothers existed after Jesus' death, much less the prominent position the family had in Jerusalem Even the author of Luke-Acts fails to name the brothers of Jesus (ignoring Mark 6:3 which was his source for Luke 4), and only reluctantly mentions them in Acts 1 but not by name -- and finally implies James is in charge of the entire movement in Acts 15 and 21 -- but never makes it explicit. Something is clearly going on here in terms of muting the influence and prominence of Jesus's family in these Gospel accounts that were written after 70 CE.

We also have much more about Mary Magdalene and her prominence in later Gospels that was not included in the New Testament, see "There's Something About Mary"