Why is The Vision much weaker in The Avengers: Age of Ultron movie than he is in the comic books?: originally appeared on Quora: The best answer to any question. Ask a question, get a great answer. Learn from experts and access insider knowledge. You can follow Quora on Twitter, Facebook, and Google+.

Answer by Thaddeus Howze, Superfan of the MCU

Weaker? In comparison to what? 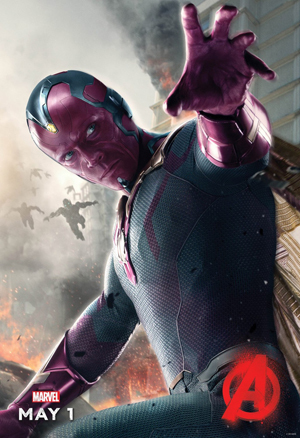 This isn't the first time I heard that complaint about the Vision appearing to be weaker than he is in the comics. I had to think about it and realized he isn't so much weaker as different than he is in the comics. As so many writers will remind us the Marvel Cinematic Universe (Earth-199999) is not the same place as the Canon Marvel Universe (Earth-616, which no longer exists after the events of the new Secret Wars-2015) and thus things may be a bit different between the two.

As far as I can tell, all of the Marvel Cinematic Universe versions of the characters suffer from media transference reduction, an expression I coined when I began to notice how different superheroes tended to look when they went from the comic to the screen.

As for the Vision, his powers didn't seem all that diminished or different from his comic canon version.

We know what fans really wanted

The Vision was a new Avenger, one of the first we've seen in a while and people wanted him to have more screen time. They wanted to see him being awesome, immediately. The movie was about the Avengers, though and he certainly needed the setup, the origin shuffle and the debut where he joins the team.

The writers had to take a whole lot of Avenger history and creatively mash it up into a story. They debuted:

They had to do a lot. We were lucky to SEE the Vision for more than five minutes...
You can't expect him to be as awesome as he was during John Byrne's run on the Avengers when he helped bring down a supercharged Count Nefaria, who had the entire Avengers on the run until the Vision delivered "Death from Above."

If you are looking for him to display moments of awesome, you have to remember, he is a member of a group of very powerful beings who, though they are watered down in the MCU, are still forces of nature and he will have to grow into his powers and abilities. Remember he was only ONE day old and was fighting alongside the Avengers and holding his own.

How about we give the Marvel Cinematic Universe's Vision a chance to impress us before we decide he's not all that interesting or powerful?