I don't pretend to speak for the unconscionable number killed at the wrong end of a firearm. From Baton Rouge to Chicago, Dallas, Ferguson, Orlando, St. Paul and San Bernardino - every life snuffed out at the barrel of our collective inaction is one too many.

We can do better. We can save lives, and it starts with data.

In the U.S., over 33,000 people were killed by firearms in 2013. In fact, firearms are now more likely to cause premature death than HIV, Hepatitis, Tuberculosis, and Syphilis combined. In 2013, firearms caused more deaths than alcohol - which is regulated - and Parkinson's - which the National Institutes of Health (NIH) spends over $150 million researching annually. 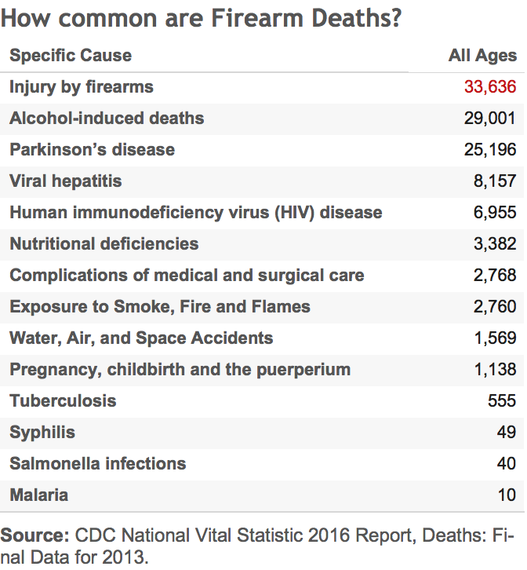 But the U.S. Congress does not make it easy to study firearm deaths the way we study almost all other causes of death. They prevent the Executive Branch from collecting comprehensive national data on the firearm transactions that may have led to those deaths. In contrast, when the exceedingly infrequent air or space accident occurs, the National Transportation Safety Board studies exactly what went wrong. They sift through mountains of evidence finding ways to improve crash survivability. Why are firearm deaths treated so differently?

Consider This
If past is prologue, 67% of American deaths will result from infections and diseases each year, and another 23% from cancer. In the face of our own mortality, Americans put tremendous energy into minimizing the impact of those infections, diseases, and cancer on our lives. To that end, the Centers for Disease Control (CDC) and NIH spend almost $40 billion annually protecting Americans from these leading causes of death.

But 44% of deaths occur before age 75, and 13% of them are caused by accidents, suicides, and homicides - three things which are decidedly not "inevitable" and are significantly impacted by the use of firearms. A quick scroll of NIH funding per condition reveals 265 areas of research - everything from Anorexia to West Nile Virus. There's even funding for injury research . . . except injury due to firearms (because Congress effectively prevents major research on firearm deaths through the Dickey Amendment).

What is the Dickey Amendment?
Jay Dickey is a former Congressman from Arkansas who amended a 1996 appropriations bill with language that removed $2.6 million from the CDC's budget, the amount they spent on firearms-related research the previous year.  In December 2011, Congress added language equivalent to the Dickey amendment to appropriations for the NIH, stating "none of the funds made available in this title may be used, in whole or in part, to advocate or promote gun control."

These amendments had a chilling effect on both the CDC and NIH. Research that could easily be conflated with gun control, like studying the survivability of mass shootings based on the type of weaponry used, puts government agencies at political and budgetary risk. Instead, researchers must approach firearm deaths tangentially, through grants that focus on violence prevention among sub-populations. This approach is antithetical to how the US studies causes of death in virtually every category, a point with which Dickey now agrees. In a 2012 opinion piece for the Washington Post, Dickey reversed his position and stated:

"Scientific research should be conducted into preventing firearm injuries and that ways to prevent firearm deaths can be found without encroaching on the rights of legitimate gun owners. The same evidence-based approach that is saving millions of lives from motor-vehicle crashes, as well as from smoking, cancer and HIV/AIDS, can help reduce the toll of deaths and injuries from gun violence."

But the Dickey Amendment is not the only hurdle. Another research barrier is the lingering impact of the appropriately-named Firearm Owners Protection Act. Passed in 1986, the act enshrined a prohibition against a comprehensive federal database of firearm transactions into U.S. law - and has significantly limited the government's ability to study the exchange of lethal weaponry among the citizenry. In contrast, the federal government used to do anonymous reporting of HIV until we realized it was preventing us from stopping the transmission of the virus. Tracking all of the firearms that cause premature death is no less important.

You'll Shoot Your Eye Out
Mrs. Parker wasn't wrong when she told Ralphie he'd shoot his eye out if he got the Red Ryder BB Gun he wanted in A Christmas Story. Because the truth is, most firearm deaths are not bad guys killing good guys, or even good guys defending their homes and families. The overwhelming majority are just guys . . . killing themselves. 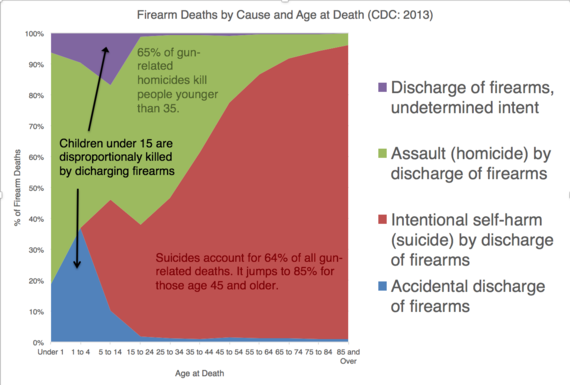 Suicides account for 64% of all gun-related deaths, especially among older populations of males. Making firearms easy-to-acquire makes death easy-to-achieve for someone contemplating suicide. Accidental discharges of firearms are taking the lives of American children, like Ralphie, under age 15. Homicides are robbing our communities of a younger generation. In fact, 65% of gun-related homicides kill people younger than 35, mostly males. But these are not young men being killed by homeowners defending their family and property.

According to ten years of data from states voluntarily participating in the National Violent Death Reporting System, justifiable self defense and law enforcement accounts for less than 10% of violent gun deaths. The majority occur between intimate partners, during drug-related exchanges or as part of a series of sequential crimes. Figuring out how to reduce the prevalence of firearms in these circumstances seems like an evidence-based intervention on par with preventing traffic fatalities, disease transmission, or cancer.

But firearms don't kill people. People kill people, right?
Wrong. People injured with firearms do not die from the sheer hatred or fear of the assailant. The same way HIV attaches and fuses with a host cell, a bullet destroys tissues and cells, disrupting heart function, lung function, brain function, and blood flow.

In 2013, roughly the same number of Americans died from firearms (33k) as motor vehicle accidents (35k) - a comparable situation which involves a lethal object (a motor vehicle) and a person (driver). Both bear responsibility. Both must be studied so effective mitigation can occur. In fact, cities around the globe have embraced Vision Zero, a multinational effort to eliminate traffic fatalities through a combination of structural and behavioral modifications. Where is the vision zero for firearm deaths?

What would data do?
Cities are increasingly using data to predict outcomes and solve problems. Armed with adequate data, cities can predict which restaurants are likely to generate a food borne illness, which children are likely to be poisoned with lead, which police officers are likely to have an adverse incident with residents, which intersections are likely to cause traffic fatalities, and which populations are likely to transmit HIV. These life-saving efforts are only possible when you admit there's a problem and get serious about using data to understand it.

Firearm deaths are no less predictable. It is possible to predict the risk potential for a lethal firearm discharge by analyzing: a person's criminal record, history of domestic violence, mental health diagnoses, relationships with known terrorist groups, the purchase of certain types of firearms, educational attainment, etc. - these are just a few of the variables that could be researched to understand who among us is most at risk of using a lethal weapon against themselves or others.

So take action. If you agree that firearm deaths should be researched, studied, and mitigated, then contact your elected representatives and ask them to remove all language from the U.S. Code (and any governing appropriation) that hinders the CDC and NIH from appropriately resourcing the direct study of firearm-related deaths. Ask them to eliminate the prohibition on a comprehensive registry of firearm transactions. Donate to an organization working hard to prevent firearm deaths, and stop donating to organizations who shroud firearm deaths in perpetual mystery - protecting gun owners and manufacturers at the expense of gun victims and their families.

On a Personal Level
As we tread cautiously through uncertain times, we should do as Steven Pinker suggests, and give our "more peaceable motives the upper hand." We must stop weaponizing hatred and fear. In my 35 years, the only path I've found to disarm hate and fear is the one lined with facts and objective truth.

As someone who believes, as Jay Dickey now does, that firearm deaths should benefit from the same level of scientific research as any other cause of death - I am ready to see more courage, objectivity, and research on this issue.