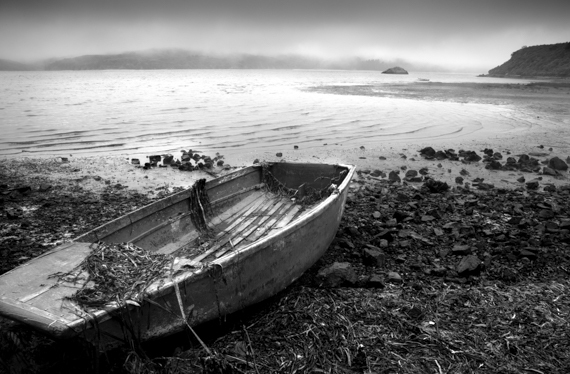 There is a powerful lure for me in places that are past their heyday, when the world is finished with them and they stand quiet and apart, down at heel, abandoned after serving their usefulness.

A few years ago I rented a house in County Kerry in Ireland, on a small rise near the ocean. In a visit to the local town a shopkeeper asked if I'd discovered the derelict hotel just down the shore from where I was staying. Naturally, I sought it out that very day. There it stood, a monolith, right on the beach. It was an incongruous sight, and not a sign of life to be seen. Most of the roof had given way and the concrete walls still standing wore deep cracks and scars from the decades of punishment at the hands of wind and salt. Across the entire frontage of the property a stone breakwater stood in two separate pieces, cracked neatly down the middle as if by a stupendous lightning bolt. Or was it a rogue wave, I wondered?

It was easy to see the spot had once been grand. I envisioned the well-heeled patrons sipping tea on its wide sweeping deck facing the sea, and a host of fashionably dressed ladies leaning over the balustrade to listen in on the conversations below.

I carefully picked my way across the front deck, through the minefield of debris, to the great main door, lying unhinged across the opening. Calla lilies, native to Ireland, with decadent blooms the size of cornets, had popped up everywhere through cracks in the concrete, their velvety white blossoms bizarrely intact.

The lobby with its 20-foot ceilings still hinted at its former magnificence despite years of graffiti-bombing and neglect. I thought of how many revelers must have glided through these rooms, brimming with excitement on their way to weddings and parties and banquets. It had since seen its share of vagrants as was obvious by the sodden mattresses, cigarette butts and foam cups lying about. I even spotted a battered hibachi. Along one wall stood the remnants of an opulent marble staircase that once headed to the promenade on the second floor but that now ended abruptly after only five steps, as if a gigantic power saw had buzzed neatly across it.

Anything of value was long gone. If it was movable, or removable, it had been pilfered. However, I noticed on one standing wall several rows of carved wooden pigeonholes, stacked one atop the other, where once the room keys had been safely stowed. Strange how it remained the only original fixture in the entire structure to survive undamaged.

In a public washroom off the lobby ornate sinks, chipped and weathered, stood in a row, the porcelain barely visible under a thick coat of vibrant green moss. Weeds grew belligerently out of each drain. Out of one sprouted a daisy-like flower in full bloom.

Behind the stairway stood a large opening into what had obviously been the hotel ballroom. I could tell by the size and openness of the space; nothing there to impede the dancers. The elevated bandstand, relatively unscathed in one corner, would have been its heart and soul, sending out popular songs of the times.

Can you hear them? Sweet Georgia Brown, Yes Sir, That's My Baby, My Blue Heaven, and for the last waltz of the evening, the enchanting, wistful It Had to be You.

I imagined the scene, the postwar frivolity of it all, the ladies in flapper dresses draped in strings of pearls, their heads in black velvet cloches with kiss curls peeking out, their mouths bright red Cupid's Bows. And there were the men, their hair slicked neatly back, sporting handlebar moustaches, pinstriped suits and suspenders, collar stays and black and white saddle shoes.

I wandered back through the lobby and stood out front. I pictured a young man and a woman that might have stood here long ago, gazing out to sea.

The woman is twirling her parasol, dreamily. Her courtly companion turns to her, tips his hat, and asks deferentially: