A traditional Japanese meal unrolls slowly, with a succession of small individual dishes, each with varying ingredients, textures, cooking styles or flavors. The aim of the chef is to present a meal delighting the eye with its beautifully-arranged ingredients, pleasing the palate with its combination of different tastes and surprising the diner with its inventiveness.

Fresh Station restaurant is located on Zhongxiao East Road, a nondescript city block in Taipei, near the Dr. Sun Yat-sen Memorial. The restaurant takes its name from the rest stations for travelers that marked the Japanese highway system, furnishing travellers with food, luggage porters and fresh horses for their journey. 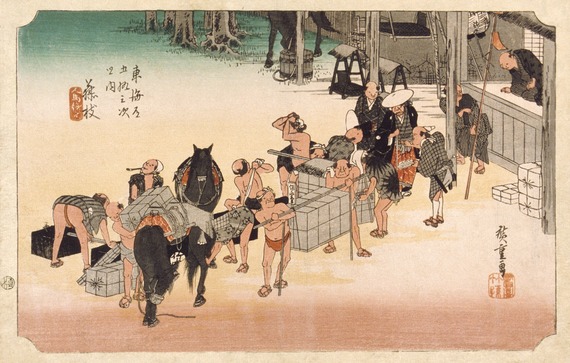 In the main restaurant, Fresh Station diners choose from a set menu. But in the exclusive private dining pavilion next door, sushi chef Lin Hui-yang creates his unique culinary masterpieces. Past an unmarked entrance, you step into the rarified atmosphere of an ancient scroll. The scene is set with artisanal wooden chairs arranged around a sleek stone counter and arrangements of green bamboo placed in large pottery jars. 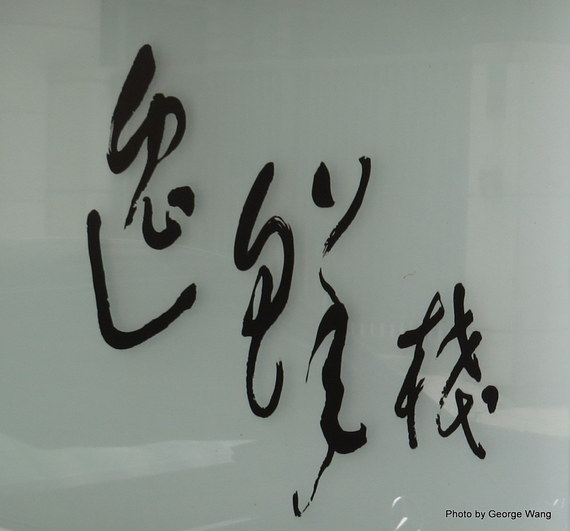 The focus is on fresh, seasonal ingredients, served raw or enhanced by gentle and quick methods of cooking. Chef Lin establishes a tempo and rhythm in his culinary compositions to respond to the food in season as well as the mood and preferences of his diners. His menus invariably leave leeway for showing off his precision knife skills and eclectic creativity. 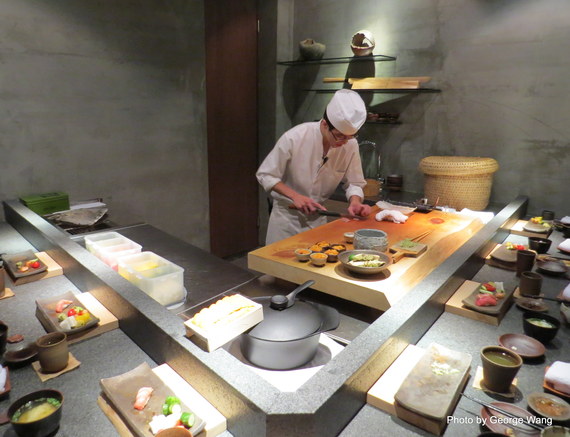 Chef Lin composes his meals from the center of an L-shaped counter. From here, his glance is constantly up and down from diners to ingredients gauging responses and inclinations. Directing his staff with a discretely-worn microphone, dishes unroll smoothly from his skilled hands to the expert serving staff to arrive before the diner in seamless fashion.

Japanese cuisine eschews different flavored dishes touching each other on a single plate. Stacks of rustic Japanese tea ceramics are carefully arranged above the counter like an artist's palette, awaiting the chef's creativity. 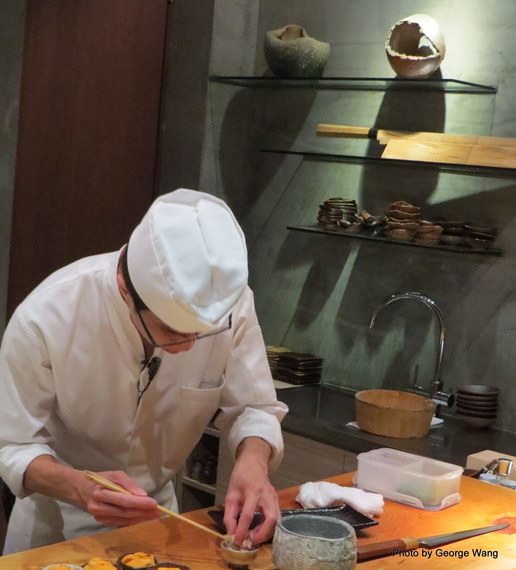 Chef Lin first arranges plates with a selection of his own Japanese pickles to stimulate the appetite and clean the palette of his diners. The meal begins when Chef Lin presents the first dishes, a selection of sashimi, precisely cut and arranged on small plates.

Chef Lin uses his personal sushi and sashimi knives in the preparation of the meal. The best Japanese cutlery originates from Sakai, the capital of samurai sword manufacturing since the 14th century, and is forged from the same carbon steel used by traditional swordsmiths.

These knives were brought back to Taiwan after Chef Lin's culinary apprenticeship in Japan. He regards them as a combination of diploma and tool. And like a diploma, they are inscribed - in this case engraved - with his name, Lin Hui-yang. The final character in his name couldn't be better for a sushi chef as yang literally means ocean. 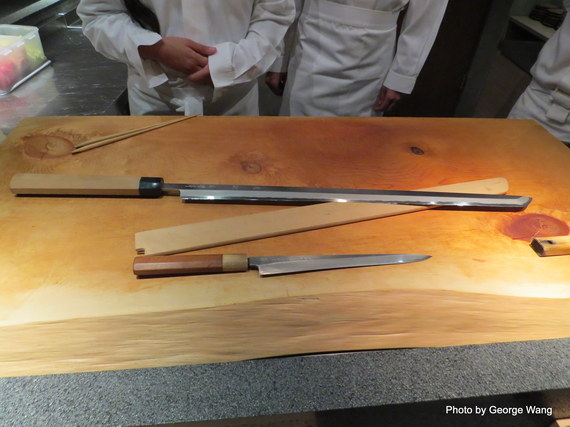 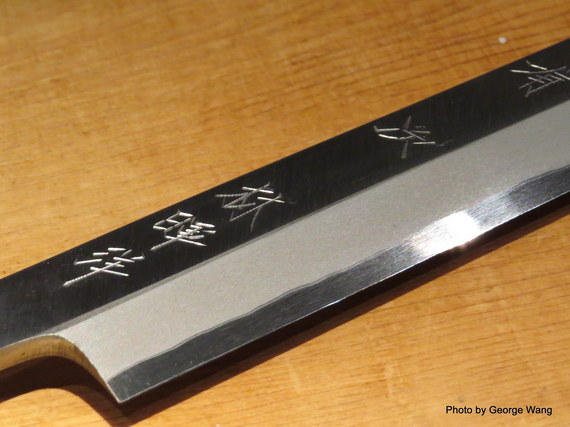 Chef Lin next places a plain wooden box on the counter before his guests. This is opened to reveal sea urchin (uni) stacked like the gold bars at Fort Knox. He deftly arranges the uni in a shallow bowl. While often referred to as sea urchin roe, uni is actually the sex organs of the spiny creature, and offers diners a sweet, somewhat briny taste that is appreciated throughout Asia. 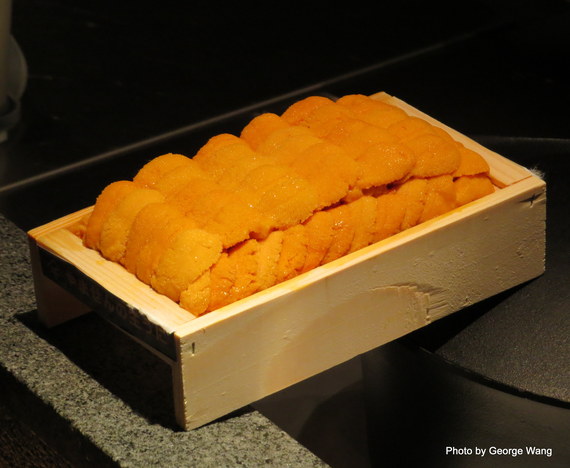 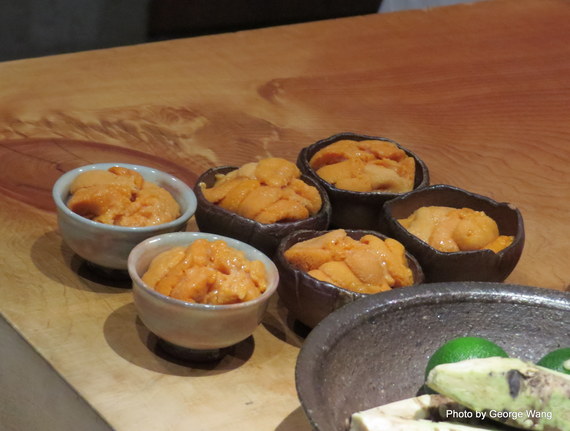 Known for his innovative and international approach to ingredients, Chef Lin next presents a dish of thinly-cut slices of pork liver and meat from Spain's prized black, acorn-eating pigs. These are quickly cooked with a gas torch creating a contrast with the previous uncooked ingredients from the sea.

The meal ended with a fusion of east and west. Instead of a traditional Japanese dessert, Chef Lin created a mango ice-cream parfait with Taiwan's famous fruit. The intensely-colored mango ice-cream was studded with gelatin decorations shimmering like a Tiffany's window display, and crowned with a long slice of mango rolled to resemble a vibrant, orange rose.

Japanese often organize eating tours to Taiwan, that focus on sushi and sashimi. The quality of the fish from Taiwan's waters and the training of its sushi chefs in Japan, make the trip popular among Japanese food connoisseurs. Chef Lin, fluent in Chinese, Japanese and English, welcomes guests from around the world who appreciate his refined and innovative approach to Japanese cuisine.

Traditionally, Japanese guests thank the host by uttering gochisōsama deshita (it was a feast) after the meal. Japanese actually regard this as a thank you to the host as well as to the ingredients that made up the meal. You should also thank the restaurant staff when leaving. After eating Chef Lin's meal, you'll be more than happy to do so, and anxious to return for a meal that unrolls like a masterpiece from the hands of an artist. 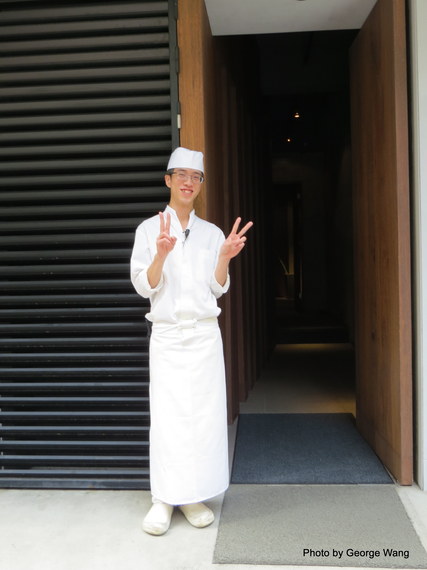