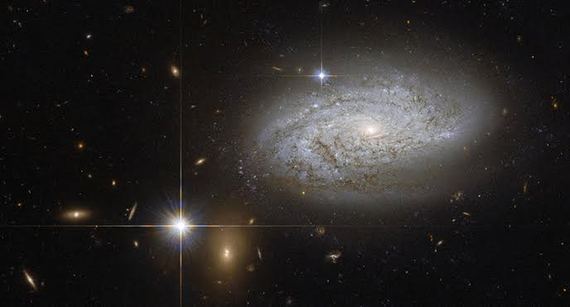 The massive public interest in the recent papal visit to the United States has highlighted one of the cultural enigmas of the early 21st century—the persistence of religion within a secular framework. Where some believed that the rise of a secular culture would lead to the slow and inevitable death of religion, we have seen a very different pattern beginning to emerge. Religion is changing, adapting to a new cultural landscape, and finding new forms of expression and existence.

The rise of secularism is, of course, very often linked to scientific progress. In his important work A Secular Age, Charles Taylor argued for the rise of what he called an "imminent frame". What Taylor meant by this was an automatic habit of thought which saw the universe as self-contained and self-referential. Taylor here describes a cultural predisposition, an axiomatic way of seeing and conceiving the world, which simply excludes or marginalizes the divine as a matter of principle. It is "unthinkable" to believe otherwise; indeed, to run counter to this cultural mindset is to be seen as irrational. Yet even despite this, religion continues as a significant presence within a scientific culture, even if, as the novelist Flannery O'Connor suggested, American culture might be more "Christ-haunted" than "Christ-centred".

This naturally raises a big question: how can science and religion relate to each other in such a context? The culturally dominant answer, endlessly recycled by lazy opinion shapers, is that science is about evidence and facts, whereas religion is about blind faith. They are condemned to a relationship of perpetual warfare, or at best the cold indifference, unsullied by meaningful conversations, proposed by the late Stephen Jay Gould.

Yet there are serious questions about the plausibility and utility of such approaches. The massive historical revisionism of the last 40 years has left the "warfare" model of the relation of science and religion -- which was developed for polemical reasons in the late nineteenth century -- reeling from scholarly demonstrations of its evidential inadequacy. As Peter Harrison brings out so clearly in his recent magisterial work The Territories of Science and Religion (2015), our understandings of both science and religion are culturally determined. There is no essential feature of either science or religion which determines their proper relationship. The historical interaction of science and religion sometimes involves elements of tension, at others elements of synergy and collaboration. But there is no universal template, no slick and simple slogan which captures the essence of their complex and changing relationship.

This has not stopped some from inventing a normative account of their relationship that suits their own agendas. The "New Atheism" which soared to public attention in the first decade of the 21st century saw science as a weapon in its faltering battle against a religious presence in American culture. Christopher Hitchens, one of the more strident voices within this movement, cheerfully rewrote history to show a clear pattern of religious obfuscation in the face of scientific advance.

Space allows us only one example of Hitchens's famous oracular pronouncements. Hitchens rightly tells his readers that the Christian writer Timothy Dwight (1752-1811), a former president of Yale College, opposed smallpox vaccination. For Hitchens, Dwight's misjudgment is typical of the backward-looking mindset of religious people. Now this slick analysis is worryingly light on evidence and heavy on ridicule. Hitchens is unquestionably justified in using smallpox vaccination as a case study of hostility to scientific advance, and in stating that Dwight opposed smallpox vaccination. But the simplistic conclusions he draws merely reveal his own deep-rooted prejudices and ideological precommitments. The situation is much more complex, and obstinately fails to conform to the "warfare" narrative that Hitchens so uncritically embraces. Let me give two counter-examples to make this point.

Hitchens clearly thinks that smallpox vaccination is a good thing, so that those who oppose it are to be condemned and those who advocate it to be commended. Yet in the generation before Dwight, Jonathan Edwards (1703-1758), now widely regarded as America's greatest Christian thinker, strongly advocated vaccination against smallpox. He even volunteered to receive the smallpox vaccine himself to show his students at Princeton that this new medical procedure was safe. The vaccination was not successful, and Edwards died shortly afterward.

This disturbing bias is unfortunately further evidenced by Hitchens's astonishing failure to mention that the influential atheist writer George Bernard Shaw (1856-1950) opposed smallpox vaccination in the 1930s, ridiculing it as a "delusion" and a "filthy piece of witchcraft." He dismissed leading scientists whose work so clearly supported it -- such as Louis Pasteur and Joseph Lister -- as charlatans who knew nothing about the scientific method. Yet Shaw made these ludicrous assertions in the twentieth century.

There is little point in extending this analysis. We need instead to construct a better model of understanding of science and religion. Both continue to be significant presences in American culture. The Balkanisation of American culture may well be served by a studied refusal to allow two of its major elements to engage in any meaningful dialogue. Yet there are possibilities of dialogue and mutual enrichment for those willing to take risks, and allowing science and religion have a meaningful conversation.

That's the approach I adopt in my new book The Big Question: Why we can't stop talking about Science, Faith and God. It's a narrative of my own journey over a period of 40 years to find ways of bringing together science and faith in a way that enriches and informs both. As a younger man, beginning my scientific studies at Oxford University, I took the view that religion was uninformed nonsense, which would soon be put out of business by scientific advance. The book tells of my gradual disenchantment with this approach, as I came to see its intellectual implausibility, and realized that human beings need more than just a description of the world if they are to leave meaningful and informed lives.

It was not until later that I read the great Spanish philosopher José Ortega y Gasset (1883-1955), who managed to put his finger on the point at issue far better than I could. Scientists are human beings. If we, as human beings, are to lead fulfilled lives, we need more than the partial account of reality that science offers. We need a "big picture", an "integral idea of the universe". Ortega put it like this. Any philosophy of life, any way of thinking about the questions that really matter, will end up going beyond science -- not because there is anything wrong with science, but precisely because its substantial intellectual virtues are won at a price. Science works so well because it is so focused and specific in its methods.

Scientific truth is characterized by its precision and the certainty of its predictions. But science achieves these admirable qualities at the cost of remaining on the level of secondary concerns, leaving ultimate and decisive questions untouched.

The Big Question explores how we can develop multiple maps of reality which allow us to develop a "big picture" of life, part of which is disclosed by the natural sciences, and part by religion. It recognizes the limits of science and religion, and insists that we respect these and work within those limits. I can confidently predict that the book will not be liked by fundamentalists of any kind, scientific or religious, who insist that their approach alone can tell us everything we need to know about life. But we live in a complex world, and no single way of trying to make sense of it is good enough to do justice to it. As the philosopher Mary Midgley wisely put it, "For most important questions in human life, a number of different conceptual tool-boxes always have to be used together."

The regnant narrative of the warfare of science and religion is showing its age, and belongs to the past. In its place, I propose a critical yet positive narrative of enrichment. This is nothing new. I am merely reclaiming and updating an older model which dates back to the Renaissance. This demands dialogue and humility, and a willingness to recognize the complexity of things. The questions that Richard Dawkins and others like him raise are good—but the answers given are inadequate. It's time to explore another approach. Above all, we need to figure out a way of engaging what John Dewey once declared to be the "deepest problem of modern life"—that we have failed to integrate our "thoughts about the world" with our thoughts about "value and purpose". The Renaissance was good at doing that. Maybe it's time for a rebirth of its vision.

Alister McGrath is the Andreas Idreos Professor of Science and Religion at the University of Oxford, and author of The Big Question: Why we can't stop talking about Science, Faith and God (St Martin's Press).