It can't have escaped your notice, especially given American election coverage, that the media possess a firmly inbuilt tendency to finger-point and to blame.

An early professional role-model of mine decreed to those of us under his influence that: "All serious journalism boils down to two simple variants - WE NAME THE GUILTY MAN ... and ARROW SHOWS DEFECTIVE PART".

It's good, therefore - if only for me as a reporter long-stewed in that judgmental marinade - to be highlighting a story characterized by completely the opposite philosophical approach. A story of extraordinary forgiveness. 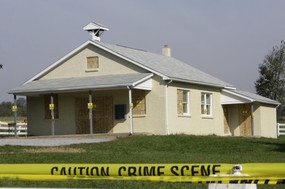 Many of us will recall, as its 10-year anniversary approaches, one of the most sickening of America's periodic school-shootings - that took place in Pennsylvania's Amish country.

In October 2006 the village of Nickel Mines leaped to national and global prominence when a disturbed 32-year-old armed man, who was married with children of his own, forced his way into a one-room Amish school, tied up and shot ten girls aged from 6 to 13. Five died, and five survived despite being badly wounded. The attacker killed himself as police stormed the small building.

I've been talking with that shooter's mother, Terri Roberts, who still lives in the area - not so much about her son (his crime remains unexplained and unfathomable) but about her, and what has happened to her since the event that the Amish themselves simply call "The Happening",

Watch my TV profile (here) of Terri Roberts, on PBS's "Religion and Ethics NewsWeekly" slot, airing nationally this weekend. [ Or see it at PBS.org ]

Terri is not Amish. She describes herself as a "God-loving Christian" and she raised her children to be the same. She had expected in her worst moments that her son's heinous action would be greeted with rage and cries for vengeance. Instead the Amish welcomed her and her family into their community with love and forgiveness.

It began with the funeral of her son the murderer. As press photographers gathered in force, a team of Amish men and women formed a cordon around the burial-site, keeping the media hordes at bay so Terri's family could bury their loved one in some degree of peace, whatever he may have done.

Terri's relations with her Amish neighbors became warm and loving, continuing that way through the decade that has followed. The Amish committee that administers the vast amount of money that flooded in from a horrified world decided to make a substantial (but undisclosed) donation to the widow and young family of the murderer.

Terri has played her own full part, too. Regularly over the past decade she has gone to an Amish home to bathe the youngest of the injured children, who is now 15 years old - severely physically and mentally handicapped by one of Terri's son's bullets. They meet less often now, since Terri has stage-four cancer that has spread throughout her body - but the girl comes in her wheelchair to visit her.

Compiling our report presented us with TV's perpetual problem in covering Amish-centered stories, since the community resolutely operates a ban on their members appearing on camera. But we do get to see and hear first-hand evidence of the principled Amish way of life - via the deeply appreciative eyes of an outsider ... one who was granted that appreciation through an unspeakable calamity and a community's remarkable reaction to it, embodying deep human compassion.

Read more of David Tereshchuk's media industry insights at his online column, "The Media Beat", with accompanying video and audio. Listen also to "The Media Beat" Podcasts on demand from Connecticut's NPR station WHDD - and at iTunes.