I'm over halfway done with my 20s, and I still don't know if I'm doing them right.

I'm 25 -- a couple months shy of 26 -- and all of a sudden, shit feels different. I have problems that no amount of SoulCycle endorphins or Le Labo candles or parental advice can fix. I have decisions to make, and if I choose wrong, it's possible the whole trajectory of my life will be changed.

Leaving your job to enter a Ph.D. program could leave you penniless, vying for tenure-tracked jobs in Boise. Revisiting an ex can mean you squander the fresh new prospects right under your nose. Every Bushwick rave not attended is a "most fun night ever" not had. And to think I've still never been to Coachella.

For more and more millennials, 25 has been deemed one of the last windows to wipe the slate clean and start anew. It's hard to not feel guilty for lamenting it when members of prior generations would've killed for this transitory time. But how can I, a goal-oriented person nearly four years shy of 30, be confident that I'm navigating this unstructured free-for-all period correctly when I've been on this earth for less time than the movie Hoosiers? A degree of self-doubt feels appropriate, but where can I find some sort of validation for how I'm living that doesn't include Instagram likes?

Society tells me to worry less. That everything will end up the way it's supposed to. That I'm wasting away the time leading up to the age "where everything starts to hurt," and that I should just go explore Iceland. But to quote Carrie Bradshaw: "As we speed along this endless road to the destination called who we hope to be, I can't help but whine, 'Are we there yet?" 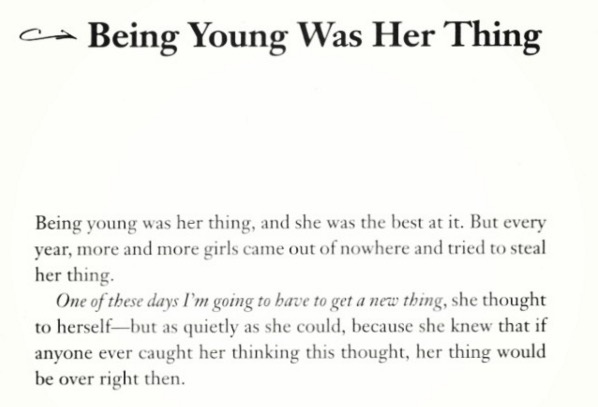 "One Last Thing" by B.J. Novak

The endless possibilities continue to be stressful when it comes to our personal lives. We're at once arguably too young to settle down but too old to fear monogamy, and it shakes up our social lives as the "chicks before dicks" coda expires; suddenly, the dicks in orbit have soul mate potential. Relationships powered solely on ideas for couples Halloween costumes start to fizzle; this is about whose hair pattern your future child will inherit. Then there are the single, no longer able to go without the constant questioning of "WHY," as though it doesn't matter WHO you date but just ANYBODY would be better than no one. People will warn you to NOT WAIT TOO LONG -- their friend waited TOO LONG. But DON'T rush -- there's still SO MUCH time!

Does the 25-year-old who's living right capitalize on their precious youth to lock up a significant other, or do they spend this time dating everyone under the sun to make sure that their future spouse is the least divorceable option? And when is it okay to start stressing about your eggs dying? "You can't meet someone until you've become what you're becoming," Nora Ephron told Lena Dunham (29) on the heels of a failed relationship. How can I ensure that I become that person before I'm infertile and getting my first Botox injections? How much time should be allotted for growing into one's self?

My foray into becoming myself, thus far, has meant embracing a singular identity, one distinctly apart from my family's, and tolerating the faint guilt that comes with it. Whereas my grandfather's obituary was once the only thing that came up when you Googled me, now it's buried under embarrassing Tweets and work of my own. I no longer belong to my parents -- I'm my own liability, in a totally different income bracket. I haven't lived under their roof for seven years -- over a fourth of my lifetime -- and now when I go home, as I recline in my childhood bed and stare out at a door covered entirely in glittery stickers from the late Newbury Comics, I am frequently issued a reminder by my mom that THIS ISN'T A HOTEL. Nowadays, I stay more nights in hotels than in that room.

For the first time, youth no longer feels infinite and middle-aged anguish is in sight. My dad's impetus to shield his parents from bad news, something I watched him refine throughout my childhood, now makes sense. Facebook has transitioned from a classmate-stalking vehicle into the barer of parent deaths or pregnancies. It's no longer out of the norm to be buying apartments, getting equity, founding startups, enrolling in shared workspaces, going freelance, working in writers' rooms, starting web series, writing manuscripts, recording podcasts, coding websites, running hedge funds, going viral, becoming famous -- all while on our parents' health insurance. It's okay -- we still have five more years to reach recognition in the Forbes 30 Under 30 list -- but to quote Drake (29), "I just wanna be, I just wanna be successful."

It's a full-time job, straddling the line between youth and adulthood. I was born in 1990; people have luggage older than me. But as my 25th year comes to a close, so does my window of being okay with having never attended Burning Man. I have ambivalence about how many hours I spend starring at an illuminated screen, but I also don't want my life to go to shit because I was too late in cuing up my ambitions. I fear I'll get too much sun on too few vacations, spend too much money on iced non-fat lattes instead of high-end light fixtures or cutting edge technology. That my wedding date will be so far off in the future, the New York Times' Vows column will no longer be relevant, nor will human fetuses and I'll just have to parent a robot.

We have only one life, one 20s, one 26th birthday. So while I'll try to enjoy mine and embrace all that it brings, I agree with what they say about youth: It really is wasted on the young.