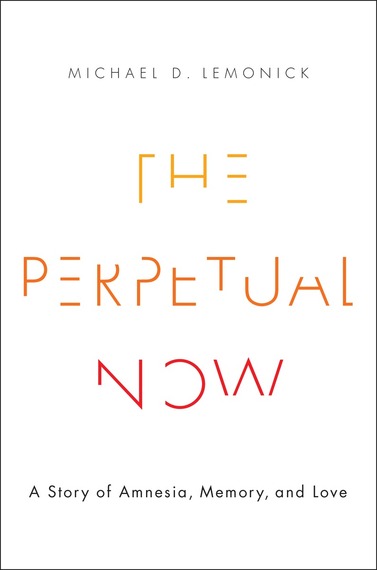 Seasoned science writer and Scientific American opinion editor, Michael Lemonick, takes on the mysteries and miracles of human memory in his latest book, The Perpetual Now: A Story of Amnesia, Memory, and Love. A well-researched, engaging and accessible combination of brain science and biography, The Perpetual Now centers on the fascinating story of Lonni Sue Johnson, a gifted and accomplished artist, musician and pilot.

During her successful career, Lonni Sue illustrated dozens of books, created several covers for The New Yorker, and provided illustrations for National Geographic, Newsweek, The New York Times, Time, The Wall Street Journal and The Washington Post. When she wasn't working, she was flying planes, playing the viola, connecting with friends, and running her own dairy farm. Relentlessly curious and creative, she led a rich and rewarding life.

But in late 2007, Lonnie Sue's life took a dramatic turn. As a result of a near-fatal bout of viral encephalitis that led to permanent brain damage, she lost nearly all of her memories. She also lost the ability to create new memories for more than minutes at a time, as well as the capacity to meaningfully contemplate the future. Thus, at 57, she became and has since remained effectively bound to the present moment like a planet to its orbit.

Her experience raises so many questions, but one seems most pressing and inescapable throughout the book: What are we without our memories? In Lonni Sue's case, it turns out, quite a lot. 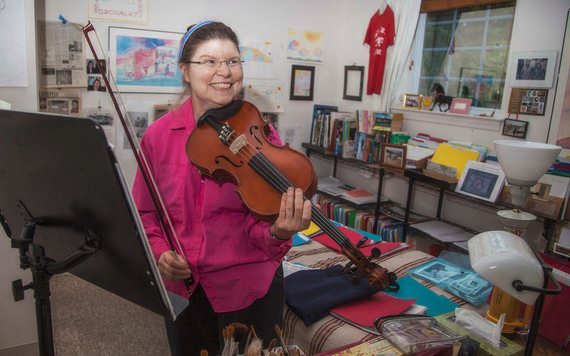 Lonni Sue Johnson in her room with her viola, 2014. Credit: Photo by Eileen Hohmuth-Lemonick.
Today, thanks to her loving sister and a bevy of friends, including several scientists, she continues to live a rich and rewarding life, albeit different than the one she led before the encephalitis struck. Her creativity and artistic abilities have returned, along with her signature style and strong personal sense of drive and purpose--which she has now found in creating unique and elaborate word search puzzles.

While Lonni Sue knows that she has memory problems, she doesn't seem especially troubled by them. In fact, she seems chronically cheerful and awestruck, which--in combination with her intelligence, education, creativity and unique skill sets--has made her a kind of perfect scientific subject. Because she is so patient and cooperative with researchers and has such a wide assortment of abilities honed before the encephalitis, she provides a unique opportunity for neuroscientists to help expand our highly limited understanding of human memory, as well as a mesmerizing lens through which to view memory research and the brain in general.

Lemonick brilliantly employs this lens, placing Lonni Sue's story in a personal and scientific context that keeps the reader engaged throughout. He includes accounts of other amnesiacs whose remarkable minds have helped advance neuroscience (including the legendary late Henry Molaison, widely known to the scientific community as H.M.), as well as accounts of the scientists who made and continue to make such advances. Lemonick also incorporates personal anecdotes arising from his interactions with Lonni Sue, her family and friends, and a wide variety of scientists--all of which combine to make the book simultaneously captivating and enlightening.

This book easily could have been the story of one broken brain and its contributions to science, but thankfully, it is so much more. At once smart and approachable, The Perpetual Now is an inspiring story of human resilience and scientific progress, a reminder that great triumphs are often borne of great tragedies. Expect an education in memory research, but also expect a gorgeous and memorable testament to the fact that we are far more than our memories.