With the publication of A Memory of Light, Brandon Sanderson finishes the epic fantasy series Robert Jordan started more than two decades ago, The Wheel of Time. A 900+ page marathon in its own right, the 14th and final installment of the series delivers a tense, page-turning conclusion to fans who've long anticipated the climactic confrontation between The Dragon Reborn, Rand al'Thor, and the Dark One. Not without its flaws, the book will surely give fans plenty to quarrel with, but it nevertheless stands as an excellent capstone, both as a thoroughly entertaining piece of writing by Sanderson and as a satisfying resolution for the beloved world and characters so vividly created by Jordan.

A Memory of Light is the third contribution to the series from Sanderson, who was personally selected by Jordan's wife and editor, Harriet McDougal, to finish out the series following Jordan's premature death in 2007. Despite Jordan's directive that the series was a single book from completion, Sanderson, a relatively young author who credits Jordan as one of his heroes in the profession and worked from extensive notes and outlines prepared by Jordan prior to his passing, soon realized that to do the material justice would require his splitting the finale into three parts.

Sanderson's first two efforts, The Gathering Storm and Towers of Midnight, largely shared the meticulous pacing of Jordan's works as sideplots began to converge and both heroes and villains gathered momentum towards a final confrontation. A Memory of Light in turn feels not unlike a firehose as that momentum comes to a head, the action kicking off from page one, with little delay in beginning to untwist some of the series' long-standing mysteries. While The Wheel of Time has been oft criticized for a tendency towards lengthy tangents and the resulting slow development of its central plotline, A Memory of Light suffers no such issue as the thousands of pages of world-building allow Sanderson to set a relentless pace of intense conflict and mini-climaxes. 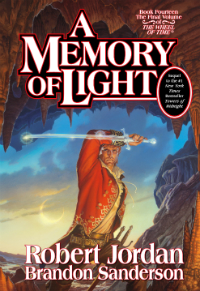 The tone is clear from the outset as Talmanes leads the Band of the Red Hand in a thrilling fight through the city of Caemlyn. The sequence provides the first few of many heroic moments afforded the wide array of supporting characters throughout and establishes the intense ground-level view of the enormous battle scenes to come.

Passing perhaps the most difficult challenge before him, the thoroughness and intensity of Sanderson's battle scenes fully deliver on the stakes and scale built up in the 13 preceding volumes. The author clearly relishes writing these sections -- one chapter, simply titled "The Last Battle," stretches on for 202 pages of nonstop fighting -- and his skill at developing a battle scene from start to finish, from strategic planning to deployment of troops to the final cavalry charge, is what makes the sequences so gripping from the perspectives of both commander and lowly soldier.

Unfortunately, the relentless pace of action and heavy focus on military movements also makes A Memory of Light feel fairly one-dimensional for a book of its length and especially in comparison with earlier parts of the series. A few standout scenes provide much needed depth to the clashes -- one early exchange between Rand and his father is a particularly moving moment and many of the sequences featuring Egwene are highlights that only build on her awesome character progression. Yet these scenes seem few and far between considering the sheer number of characters and plot lines available to commingle. Additionally, some elements -- characters, artifacts, prophesies -- that have long seem billed to play a major role in the final confrontation simply don't pan out, while other previously minor elements take on decisive parts. Several reunions between characters and sideplot resolutions that would have been both pleasing to fans and opportunities for emotional moments either happen offstage or do not happen at all. It's not that the action is ever not exciting or well-crafted, but that it sometimes seems weakly linked to the 23 years of preceding material.

Still, there is no shortage of powerful moments, both triumphant and tragic. Loyal Wheel of Time readers will long feel immense gratitude to Robert Jordan and Harriet McDougal for ensuring that the series would see a conclusion and to Sanderson for taking on the colossal work of executing it. That the book is over 900 pages and the most common criticisms will likely be things that were left out or given short shrift is a testament to the vastness of Jordan's world. And though members of the passionate fan community will inevitably quibble with some of the happenings and nonhappenings, A Memory of Light's conclusion provides an ending that feels equal to the grand scope of the work and true to the series' strongest themes.

The Wheel of Time- "Worldwide Phenomenon" Final Cut from RockSoup Productions on Vimeo.