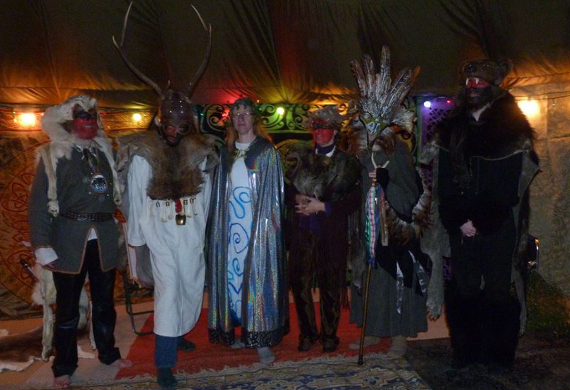 Pagans, more-or-less by definition, are not Christians, so why would we celebrate Christmas? Well, followers of paths such as Druidry, Wicca, Heathenism, etc., mostly live in countries that are nominally Christian, and in which Christmas is a pretty big deal. So most Pagans celebrate Christmas in the same way that most Christians do, as a festival of consumerism, over-eating, family gatherings, gift-giving and office parties.

Pagans have deeper links with the season though. Virtually every part of Christmas has its origin in Pagan celebrations of Midwinter. Christmas Day is on December 25th because that's when pre-Christian folk throughout the Roman Empire celebrated the birth of Sol Invictus, the Unconquered Sun. In 274 CE, Emperor Aurelian promoted Sol Invictus as a god that all citizens of the Empire could worship alongside their own deities. He combines aspects of other pagan gods, including Mithras, a Middle Eastern deity born to a virgin mother on December 25th. The birth of Christ was first celebrated on this day in 336 CE.

The original significance of the date is that, in the Northern Hemisphere, it's the first day on which the sun's rising position on the horizon begins to move northward following the winter solstice. Our ancestors took the sun's renewed movement as a welcome sign that there would be an end to winter and a return of warmth and growth. Hence they celebrated the rebirth of light, personified as a divine child.

Midwinter celebrations represented a metaphorical shaft of light in the depths of winter, when sources of food were limited and when cold, snow and frost ended many lives, particularly those of the frail, elderly and very young. Celebration lifted the spirits, and feasting was a reminder of good times promised by the sun's return, as were the exchange of gifts and the decorating of homes and temples with evergreen foliage.

As well as celebrating a Pagan Christmas, many modern Pagans also take part in ceremonies on the winter solstice, a few days earlier - December 22nd this year. The idea of celebrating the solstices originates with an English antiquarian, William Stukeley (1687-1765). He associated Druids with stone circles and was the first writer to note the summer solstice alignment of the Hele Stone with the centre of Stonehenge. Welsh Druid revivalist, Iolo Morganwg (1747-1826) followed Stukeley in believing that Druids celebrated the summer solstice, then decided they must have celebrated the winter solstice too. Gerald Gardner, a member of the Ancient Druid Order, introduced the solstices into modern Wicca, or Witchcraft, which he and his coven created in the late 1940s.

The first historian to seriously examine the status of the solstices in Paganism was Ronald Hutton, Professor of History at the University of Bristol. In his book, Stations of the Sun (Oxford University Press, 1996), he reviews the evidence for the celebration of midsummer and midwinter and concludes that our ancestors throughout history and everywhere in Europe celebrated a few days after the solar standstill when, as said, the sun's rising position begins to move again. That's also why Midsummer's Day is celebrated on June 24th, not on the summer solstice, which falls on or around the 21st.

Nevertheless, the winter and summer solstices are now firmly fixed in the modern Pagan calendar. The discrepancy in dates is actually quite useful, allowing Pagans to celebrate their religion on one day and then enjoy the secular celebrations a few days later, combining the best of both worlds.

In the British Druid Order we, like many Pagans, celebrate the birth of a child of light at Midwinter. One of his names is Mabon, son of Modron, meaning 'Child, son of Mother.' That great collection of ancient tales, Y Mabinogi (The Mabinogion), tells how the Mabon was stolen from his mother's side at three nights old. A party led by Gwrhyr (Tolkien's Gwahir), a shape-shifter who can speak the languages of all animals, visits the Oldest Animals in the World, a blackbird, a stag, an owl, an eagle and a salmon, asking each in turn if it knows the whereabouts of the Mabon. The salmon guides them to where the child is imprisoned and they set him free. The three nights the Mabon is missing are presumably those between the solstice and Midwinter, so it was not exactly the time of his birth our ancestors celebrated, but that of his recovery and release three nights later. 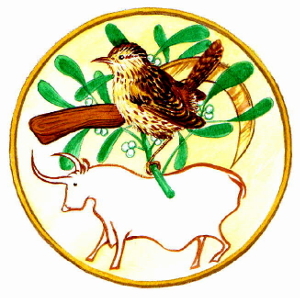 This Midwinter, my sons and I will re-enact the quest for the Mabon in a yurt in Shropshire with friends, colleagues and their kids. We'll dress in animal guises, dance and drum. Afterwards, we'll feast on food that folk have brought to share. Mistletoe will be distributed by one of my sons, who will be clothed head to foot in branches of it. The Druidic link with mistletoe comes from Pliny the Elder (23-79 CE), who describes a ceremony in which Druids cut the plant from an oak tree with a golden sickle (art by Greywolf). Token gifts will be handed out. We'll share music, laughter and friendship, all in celebration of the reborn child of light.

This all happens on December 20th, five days earlier than it should, because it's hard to get folk together on the right day due to family commitments that often involve non-Pagan folk, plus the fact that public transport closes down over Christmas. Ah well... My sons and I will be at home on Christmas Day, celebrating the rebirth of the Mabon in the traditional Pagan way, feasting and exchanging gifts in a house decorated with evergreens, glittering tinsel and Faery lights.

Hail the Mabon, and a Merry Midwinter to all!