You may not know me, but I certainly know you.

I was here long before you and your ancestors arrived in North America.

For more than 75 million years I've been evolving here, pressed by the same continental plates that pushed up the Rocky Mountains, sculpted by wind and water until I became a place of phantasmagoric shapes that leave today's visitors awestruck. Some say I remind them of the Valley of the Kings in Egypt or the Temples of Angkor Wat in Cambodia, though no human hand had any role in creating me.

The softness of the Earth that makes me and the rainbow colors striating my huge walls show off the treasure trove of history I have experienced. In 2010, for example, a seven year old Junior Ranger found the fossil of a saber tooth cat right outside my Visitor Center. I'm part of a ground-breaking collaboration between the National Park Service and Native Nations, as my Pine Ridge area is managed by the Oglala Sioux Tribe, descendants of the age-old Native inhabitants. 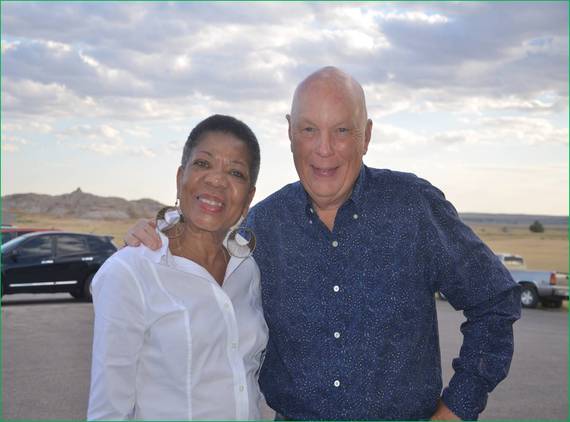 Mr. President, my sublime environs were the setting of the Badlands Astronomical Festival in 2012 where my surrogate writer met the astronaut Story Musgrave, who fixed the lens of the Hubble Telescope in outer space.

Mr. President, I am reaching out to you because I am disturbed by the approach your administration is taking to the Park Service and the Department of Interior. I am particularly struck by your response to social media posts emanating from the Service, and from me.

As I understand it, one of the people working here tweeted: Today, the amount of carbon dioxide in the atmosphere is higher than at any time in the last 650,000 years" #climate.

Mr. President, that is a fact. It is not conjecture, nor is it intended to embarrass you. Just because you profess not to believe in climate change doesn't change the facts.

Your administration's heavy handed response - shutting down the world's social media access to me and my brothers and sisters in the Park Service because you are displeased with scientific facts, reminds me of a similar brouhaha I witnessed almost 400 years ago:

In the 1630s, the Catholic Church forced Galileo to renounce the scientific discovery that it's the Sun, not the Earth, that is at the center of our universe. I know that ignorance can appear to thrive for a while, but you should know that it must not, cannot and does not last.

Mr. President, I might begin to worry about you - if not for the fact that I cannot worry. With my sister Yellowstone just west of me - so close to the Earth's magnetic center that her skin has the thickness of a potato chip in some places; with Death Valley to the southwest containing the hottest, driest and lowest points in the country (282 feet below sea level) and my big sister Mount Denali, "the Great One" clothed in ice farther north in Alaska - I'm fairly confident we can handle whatever you can throw at the world. We are ageless and eternal, remember, and you will be lucky to enjoy another 30 years on this side of the grave.

Still, I am concerned for the plight of the people, the wildlife and all of Nature under your watch. Your choice of Cabinet members to lead the agencies that oversee the education of our nation's children, the health of its people, the protection of its environment and indeed who will represent our country to the world suggest a period of exploitation that I haven't seen in my 75 million years.

You have shown little inclination in your lifetime to think of others, and now that you are in the position where you must look out for the well-being of all, it is becoming patently obvious that you are not up to the task.

How do you feel, Mr. President? Do you think that picking a fight with the Park Service and the people who manage and maintain us is a good use of your presidential time? Do you think that wiping out information is the way to advance society? I have never been more proud of our people who refuse to be censored and are finding alternate ways to get the message to the public that your draconian approach has precedence, and is doomed to failure.

One predecessor whom your supporters extol - President Ronald Reagan, is famous for the words, "Tear down that wall, Mr. Gorbachev!" Now you propose to do down in history as the president who put up a wall against our neighbors, denigrated her people, and started a false controversy between the victims of crime and the perpetrators based upon their nationality. Maybe you don't even know that my sister park, Juan Bautista de Anza National Historic Trail, commemorates the expedition of Mexicans, Natives and Africans to San Francisco, 1775-76, that helped develop that city and its Presidio.

So Mr. President, before you get completely unmoored from reality, I implore you to remember that we in the National Park System were here long before you, and we will be here long after you are gone. We are here as a cautionary note to civilization.

For the good of our nation and the world, please listen to us instead of trying to muzzle us. Thank you.