Earlier this year, I came out of my winter running hiatus thinking about a new goal. Feeling a bit burned out by half and full marathon training, I recalled a terrific piece we'd published last year, "The Mulligan Mile." Amid a disintegrating marriage, the author, Louis Cinquino, set out to run a five-minute mile at age 50, a mark he very nearly hit as a high-schooler. Huh. The mile.

The fastest one I ever ran was a 5:31, when I was 26 and doing weekly speed workouts with the New York Road Runners Club to prepare for the 1994 New York City Marathon. We ran mile repeats around the Great Lawn in Central Park on Thursday nights, hard against the glowing midtown skyline. It was beautiful and awful all at once. When I think about that 5:31, I can almost taste a metallic tang in my mouth. It was the closest I've ever come to vomiting because of exercise. But two decades later, at 46, I decided to see if I could run a hair faster. A 5:30. It would be a reach, but this year -- the 60th anniversary of Roger Bannister's first sub-four mile and the 50th anniversary of Jim Ryun's first sub-four high-school mile -- seemed like the right time to try.

Plus, the mile is making a comeback. It's been a long time since the distance has really mattered in our sporting landscape (track-and-field events, of course, now feature the slightly shorter 1,500 meters), but since 1999 the number of one-mile road races in America has more than doubled to 700, according to Bring Back the Mile, which has put on 20 competitive mile races in the past two years, awarding almost $100,000 in prize money in 2014. The Fifth Avenue Mile in New York City began in 1981 with 52 runners. This year, more than 5,600 people finished. Perhaps best of all, running just one mile may do the most good for the greatest number of people. New research shows that short, intense exercise may offer better health benefits than higher mileage provides. And the mile is a gateway. "Most people can't or won't do a 5K, let alone a marathon," says Ryan Lamppa, founder of BBTM. "But most people can do four laps on a track. This is the ideal distance for getting sedentary people of all ages off the couch and out the door." 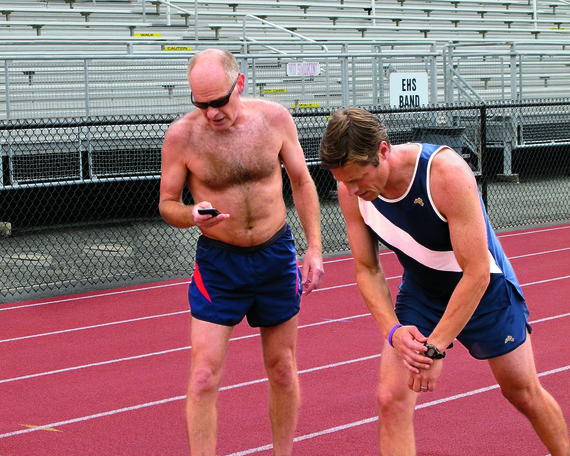 I coaxed several colleagues into training with me, and Budd Coates, RW's in-house coach extraordinaire, put us on a training plan. We began in May, and every Wednesday at noon we threw ourselves into 100s, quarters, halfs, and three-quarter-mile repeats on a gravel path behind our offices or on the local high-school track. Everything was fast. We ran several miles' worth of intense intervals interspersed with slightly less intense recovery intervals. Compared with the distance training I'd gotten accustomed to, with its moderately paced long runs, this was like moving from a cabin in the woods to the middle of Manhattan. I even needed a new mantra for when things got ugly, as my go-to, "Run the mile you're in," was useless.

In June, we ran our first time trial on the track. My splits were all over the place, but I managed a 5:55. Not bad, but I learned that a 5:30 would require me to run at the very edge of my fitness and ability -- and that this could be fun, even addictive. After a couple of rusty weeks, my cadence began to change and I felt stronger, healthier, better than ever. In fact, all the speedwork saw me through our Heartbreak Hill Hat Trick (a 5K, 10K, and half-marathon) in June, as well as three summer triathlons, one of them my best ever.

On our next attempt, Jeff Dengate, who at the time was RW's Gear Guy, agreed to be my rabbit. But he didn't so much pace me as race me. A 5:30 calls for 82- or 83-second quarters; he went out in 78. I followed, crashed, and clocked a 5:36. But I learned a bit more: The first quarter is crucial. Start too fast and you're doomed, even more so than in distance running. 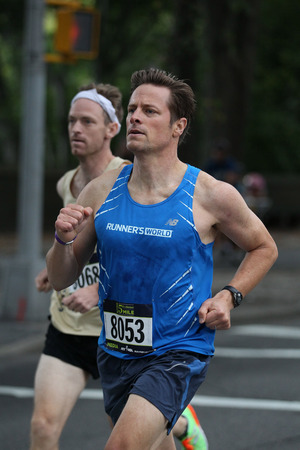 Going out too hard (again) on Fifth Avenue.

In September, I decided to try a road mile and ran in the media heat of the Fifth Avenue Mile. Did I employ the first lesson above? I did not. My first quarter was... 72 -- even Dengate was behind me (but not for long). Doomed again, I ran a 2:57 second half and, as Megan Hetzel, one of my training partners, flew past me on the home stretch, I finished in 5:37. But I learned a bit more: Running at the edge of your ability in a marathon feels like you will run out of gas; in the mile, it feels like you'll combust. The pain is more jagged. It's a bungee-jump, frightening but short-lived. When it's over, you want to try again, trusting that you'll get a touch more comfortable amid the pain and that this new tolerance will translate into time, or less of it. John L. Parker, Jr. put it perfectly in his classic novel Once a Runner, whose protagonist, Quenton Cassidy, was a miler: "Training was a rite of purification; from it came speed, strength. Racing was a rite of death; from it came knowledge. Such rites demand, if they are to be meaningful at all, a certain amount of time spent precisely on the Red Line." 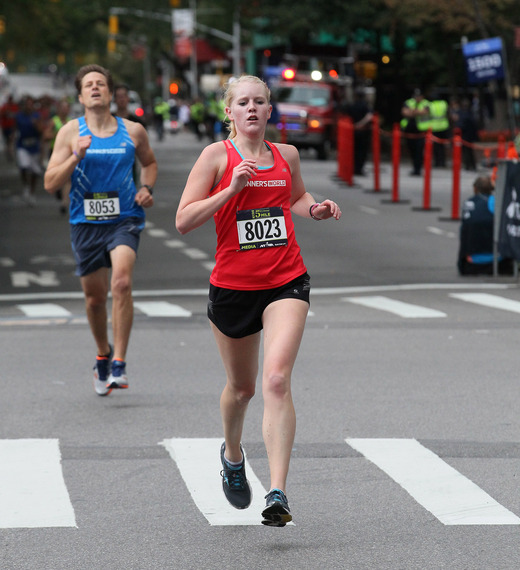 Hoping to catch RW Reporter Megan Hetzel (who finished in 5:36) on the homestretch, but really just trying not to fall over.

Four days later I went back to the track -- with a new rabbit. Liam Boylan-Pett, an associate editor at Running Times, ran competitively at Columbia and has broken four minutes eight times. His PR is 3:53.7. He had no need to race me and promised to stay on pace. As if on cue, there was a fire drill at the high school, so a couple thousand kids began filing into the bleachers just as we finished our warmup. Suddenly, we had a crowd.

Liam was spot on: an 81 first quarter and 2:45 at the half. A bunch of the kids screamed "RUN!" But my wheels wobbled on the third lap. Liam tried to wait for me while holding a pace that would still give us a chance. Repeating my new mantra ("turnover, turnover, it's almost over"), I tried to kick on the last lap, which was 88 or 89 (frankly, I don't remember). A 5:40. I lay on my back on the infield trying to breathe and thinking, Really? I hurt that much and ran slower? But that sense of futility turned into something like optimism, because I had learned a bit more: The first quarter is crucial, but the third quarter is the key, and the hardest part of it all. You have to practice holding on before you can bring it home.

A colleague has pointed out that the age-graded equivalent of my 5:36 would be a 5:03. This is satisfying, I guess, but I'm still reaching, still learning. My mile is a work in progress, and even though I shifted back to long distances in the fall, I will come back to it. Running at the edge of your ability has its own rewards, and you won't always find them on your watch.