Have a math fan in the family or friend of the family? If so, check your wallet -- not for money but for your business cards. Are they still there? If not, they may be part of a worldwide math challenge. Over the past month, people around the world have been building a mathematical structure out of more than a million business cards.

The construction teaches its own mathematical lesson, which is undoubtedly part of the point in the colossal math project dreamt up by Matt Parker (Queen Mary, University of London) and Laura Taalman (National Museum of Mathematics). The final sculpture is a Mega Menger, as it is known, which may be the largest fractal ever built. The fractal itself is known as a Menger Sponge. To make one, begin with a cube. Make 20 copies and place them as you see below. 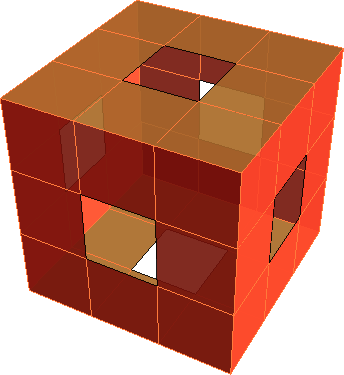 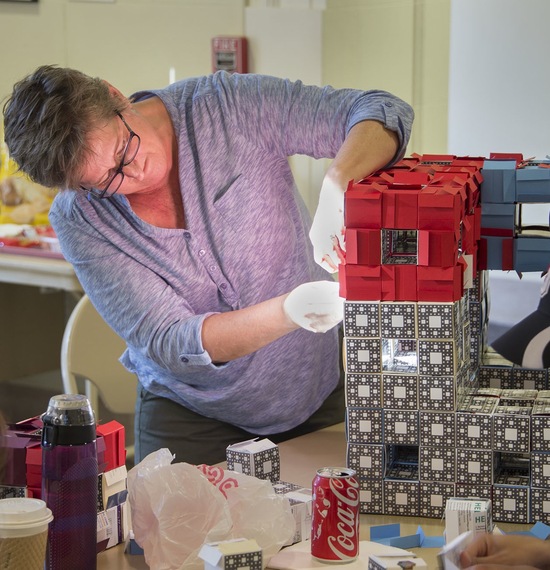 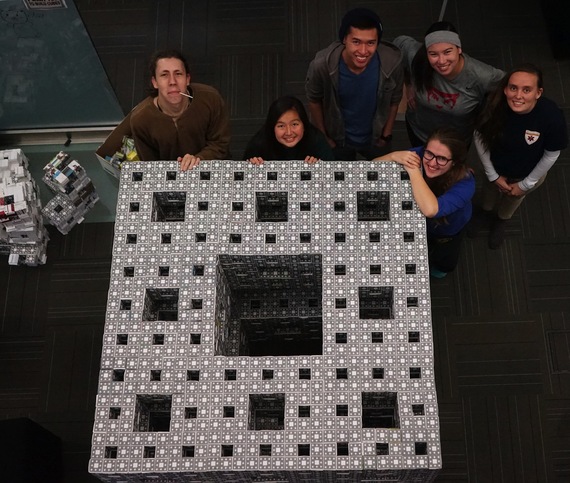 How many cards did the Willamette structure take? This is where you get to do some math. First, it takes six business cards to make a box. Twenty boxes are needed for a level one Menger Sponge so 120 total cards are needed. How many are needed for level two and how about level three? You may notice the uniform design on the completed Willamette Menger Sponge. This is due to paneling as seen in the image below in which undergraduate Jessica Kawana works Willamette's structure. Adding this aesthetic took an additional 18,048 printed cards. Multiply the total cards needed for a level 3 Menger Sponge by 20 and you get a Mega Menger requiring over 1.3 million cards! 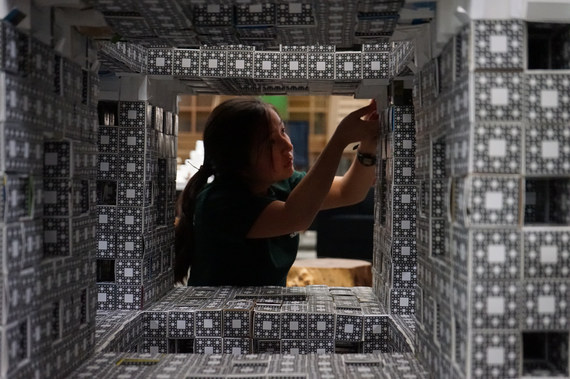 October was a wonderful time to launch such a worldwide event as the 21st of the month celebrated 100 years since the birth of Martin Gardner, who had no formal education in mathematics but had an enormous influence on the subject. In the words first uttered by mathematician Richard K. Guy, Gardner brought "more mathematics, to more millions, than anyone else." Martin Gardner wrote the Mathematical Games column in Scientific America from 1956 to 1981 and published over 70 books. Simply look at your local library or online to see his many entertaining subjects! Every October, worldwide celebrations, called Celebration of Mind events, honor his influence with interactive evenings of mathematics for young and old.

In the spirit of Gardner, let's make our own fractals. To simplify things, we'll go digital and work in 2D rather than 3D. We'll make a Sierpinski Carpet, which is the 2D analog to the Menger Sponge. Using ideas similar to those in my book Math Bytes: Google Bombs, Chocolate-Covered Pi and Other Cool Bits in Computing, we'll create the image using a picture rather than boxes. We begin with an image of Martin Gardner. 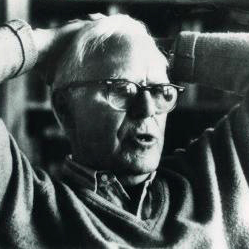 We make eight copies and place them as seen. 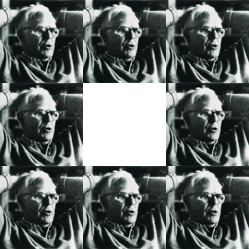 Don't like my color tones? Try a different starting image. It's your choice. You can make a Sierpinski Carpet or Sierpinski Triangle at the Math Byte's fractal generator webpage.

See what you can make and enjoy the joy of math and fractals.

Want to work in 3D? Learn more about the Mega Menger project at the Mega Menger webpage. Want to do more fun math? Host your own Celebration of Mind party. To learn more about the worldwide celebrations that honor Martin Gardner, visit the Celebration of Mind site. Through these and related resources, you'll find many ways to be challenged mathematically -- just grab a pencil and paper or maybe a stack of business cards.