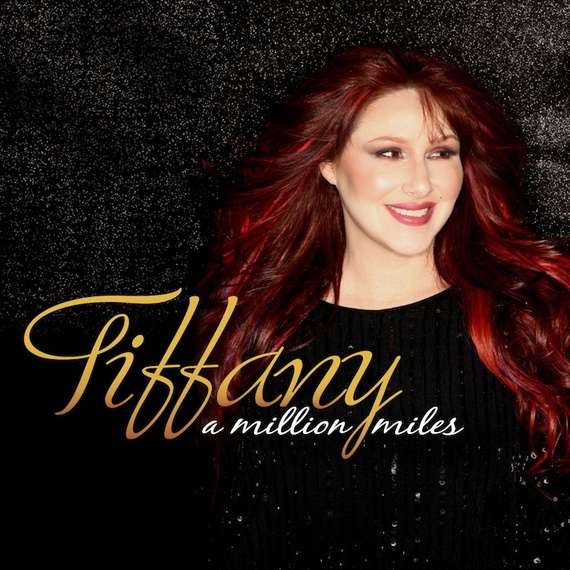 For children of the 80s and 90s, the name Tiffany conjures up images of denim jackets, fiery red hair, and bubble gum pop, but there's much more to the mall-tour princess than most people remember.

At the age of 16 Tiffany became one of the youngest female artist in history to have a number one album on the Billboard charts, as well as back-to-back number one singles. Though her road from shopping mall super-stardom has had its share of pitfalls, she has always managed to pick herself up and keep walking, and that perseverance has led her to the release of her 9th studio album, aptly titled A Million Miles.

The project started after she received a call from Pledge Music. "It's really taking me to the next level of connecting with my fans," she states. "It's been really cool to have everyone behind the scenes with me from the very beginning. It's allowed me to get more comfortable and break down those expectations of 'Oh I have to be in full make up and I have to look great, and it has to look like a big studio' in favor of what's really important: it just has to look real."
And real is exactly what A Million Miles is. It's her story.

"I'm very proud of I Think We're Alone Now," Tiffany says of her first number one hit, "but as I have progressed in the industry there've always been things I've wanted to say. I wanted to write music at 16 and 17, but no one encouraged me, so for a long time I just put that on the back burner. Now that I've pulled that back and started writing, I've had to learn to trust my musician friends, band members, and people close to me with my moments of failure or saying something stupid. I really credit them with being patient with me. I still have a lot to learn, but I'm excited to be here and I feel like I really have something to bring to the table."

Of the album's 10 tracks, Tiffany co-wrote on all but Daddy's Girl, written by Bridget Tatum and Heather Little. "Bridget is a wonderful person and a great girl to be around," Tiffany says of her friend. "She would sing Daddy's Girl in her shows and it would bring me to tears every time."
Fall Again is a very personal track about watching someone close to her battle addiction. "It was the first writing session I had with Dana and Judd," she recalls. "It was pretty heavy, but I wanted to write about the experience of watching my cousin, who was a good woman, getting stuck. It really became a romance for her, thinking about alcohol. Watching it, it's hard. There's a lot of pain there and it's common. People have a tendency to say 'Oh, they did it to themselves,' and while you can't help someone who doesn't want to help themselves, it doesn't make it any less sad."

The album's title track, A Million Miles. which she co-wrote with Ellen Shipley, is about her cousin as well, "but it's also about all the great things going on in my life and how, not just my cousin, but so many other people in my life have passed on. I can only hope that they're looking down and that they are experiencing all these great things with me or comforting me when I need comfort, from heaven above which seems so far. It feels like a million miles away."

Tears, the album's final track was co-written with Pam Phillips-Oland and Steve McClintock, both of whom have worked with Tiffany previously. Oland wrote Was it Good For You, which was featured in the film "A Thin Pink Line," while McClintock worked with Tiffany on her original albums, including her hit All This Time. "It was our first time writing together, back in 2008. He came to Nashville and we wrote this amazing ballad" she recalls. "It didn't have as much production as the finished product, but I wanted it to have this long ending as the last song, because it was Steven McClintock and he was my beginning."

However, when they wrote the song, Tiffany really didn't have a home for it. She'd just come off her Just Me album and then started working on the country album Rose Tattoo, which she says told the story of her beginning. "There's a whole backstory that people just don't know about Tiffany," she laughs. "Yes, George Tobin got me the record deal, but there was so much that went on before I met him. There were so many people that helped me, out of the kindness of their hearts, and if they hadn't, I never would've been at that studio in Burbank. Rose Tattoo was my beginning and a big thank you to them; A Million Miles is my story."

The album, like Tiffany, is a little pop mixed with county and rock 'n roll. "This album really is my heart," Tiffany says. "I took a lot of my friends, who are predominantly country writers, and took them in a pop direction. It's been really fun to see them transition, too. These songs have a story and a meaning like great country songs, but with a real pop vibe. I hoped to do things that were more meaningful than just a good little tap-your-toe tune, but we didn't want to over-indulge on the lyrics; sometimes it can be too much. You want to feel good and be validated by the emotion you're feeling right then, when you put that song on."

Tiffany and her team started working on the album on December 15th, releasing it on March 31st. There is a full tour scheduled to begin late August 2016, but until then there will be spot dates, album release parties and streaming dates for her people, as well has those looking for a preview. "I'm excited to get on the road," she says. "I think that's going to make a big difference - when people can see this live. We have a lot of different polished things for a Tiffany show that I probably really haven't done since the first couple of tours, but I'm excited and ready for the next step."

The album can be purchased through Pledge Music: http://www.pledgemusic.com/projects/tiffany and On April 22nd Tiffany performs at The Mint in Los Angeles. Tickets can be purchasedhere