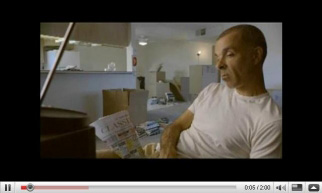 Standing behind a small lectern last March, Barack Obama addressed the nation as his campaign threatened to disintegrate underneath him. His near-40-minute speech on race, now considered one of the pivotal moments of the campaign, was remarkable both for the intelligence it credited to the audience and the depth with which it dealt with the issue. It has been viewed 40 million times* on YouTube. The advertising world has had its own race issue, on the table now for more than 40 years, but has yet to find a voice that can apply salve to that gaping wound whilst moving an otherwise ailing industry toward reconciliation.

Separately, and without our noticing it, YouTube has become the default TV channel of the internet. This is remarkable considering that a) YouTube did not exist during the last presidential campaign and b) so much of the content is published by non-professionals. As the 30-second spot eases into its golden years, the race is on to create advertising relevant to an era in which audiences increasingly consume their world crumb by crumb: Fantasy sports break games down to the individual achievements of players; iTunes encourages music consumption via individual songs; and YouTube breaks TV into the favorite three-minute bits we can e-mail or post to blogs.

Stone, a director of three feature films, successfully managed the career leap espoused by countless directors in the pages of the industry press. And yet, working outside the industry, he managed to create a viral hit the likes of which has been generally elusive to the advertising world at large. Wassup2008, an Obama-backing take on the year's hard times, generated more than 2 million views in its first three days and has a total of more than 5 million. The fact that Stone is African-American is both central and inconsequential to this piece.

Stone speaks with the same world-weary optimism as his character in the Wassup material: He is the conductor of the show, funnier, but using fewer words than his buddies. "Dookie! Pick up the phone." There could be a joke hiding behind each phrase, but his sentences resolve in succinct thoughts. Just when you think he's let the humor slink back to the closet, he drops the punch line. It is a rope-a-dope, a limbo-rock. "Even though I'm still inspired by Barack, and looking forward to a future with him as president," he says, "I kind of burned myself out on the celebratory aspect of his success. It was like when you eat too much Mexican food."

Stone seems to be neither burdened nor encouraged by the snail's pace of diversity issues in advertising, noting that "there are opportunities in the mainstream [advertising world to present] more hip and contemporary black characters that aren't the typical Colt 45-types." Yet his grin toward Obama tells us the most; he is as anxious for change as anyone else. "The norm of color is a problem and still a stigma," he warns, but adds, "I'm optimistic. More optimistic about the commercial world than the feature world, or especially the TV world."

His former executive producer at Believe Media, Gerard Cantor, added that Stone is an "example of a 'creative' package that may be the future model: a director who is more of a unique creator and can therefore bring an agency's two-dimensional idea into a unique three-dimensional campaign." Stone himself is intrigued by the array of possible venues for his work. In addition to rekindling his relationship with Believe, he is in development for both a comedy and a drama, noting that "part of the trick for an artist working in the commercial world is to coax creativity on command."

Obama Gets It But the vast and looming question that hangs over every filmmaker working in advertising and every advertising agency working with clients is the internet. Should the strategy center around microsites or blogs, "virals" or sponsored links, Twitter feeds or Facebook widgets? And rising to the podium today was a man who used every single one of them without prejudice; a black man, it should be noted, who used them all to raise nearly a billion dollars. In the process he embodied Scott Goodson's Cultural Movement, and personified Alan Wolk's Brand as Prom King, and probably hundreds of other lesser-known Big Ideas in marketing, advertising and television.

It is apt use of this disruptive technology that promises to wield the cudgel to stereotypes in a way that years of hackneyed characters on TV and advertising could not. Online we see increasingly complex depictions of minority characters become hits because, as Wassup proved (again), minorities are actually the ones behind the camera.

One of the most successful video series on YouTube in the past eight months is comprised of the following: A young black guy stands in the middle of the woods growling unprintable insults at an ex. The videos are filmed in grainy black and white, handheld, and utterly without pretension. Barack Obama he is not. The six videos in the series have amassed more than 25 million views -- the first one with 12 million alone -- they have been uploaded by other users attempting to boost their own numbers, and countless imitations and "response" videos have been uploaded. The series itself, called Unforgivable, is nominally a spoof of the vapid advertising for Sean P. Diddy Combs' cologne of the same name, in which Combs himself is pictured usually with multiple sexual partners. (Warning: Not Safe for Work).

"Unforgivable" is nothing if not an authentic viral success: the online audience at large responding to the garage-workshop stylings of a couple guys with some funny ideas. That the lead character is black, again, is both central and inconsequential to its success.

Yet, the seventh-most watched viral video of 2008 was none other than Obama's Philadelphia speech on race. All of this to say that the pool of black expression is both wide and deep.

Add to this mix an industry whose intransigence on the issue of race is legendary, whose utter close-mindedness on the issue trails behind even the American electorate and, well, you have the makings of a pretty good comedy. We'll call it "Wassup With My Balance Sheet," and it stars four white guys sitting around a board room mulling over layoffs, two with fancy haircuts and sneakers, two with MBAs and tailored suits. One of them has an accent that the other three secretly admire. And as the webisode begins, an AVO intones the following, "If a black kid in the woods gets 20 million views, will the advertising world notice?"

Or does it always take 40? Barack Obama might know a thing or two about that, but then, he's got a country to run.

Raafi Rivero is a director and cofounder of Desedo Films.