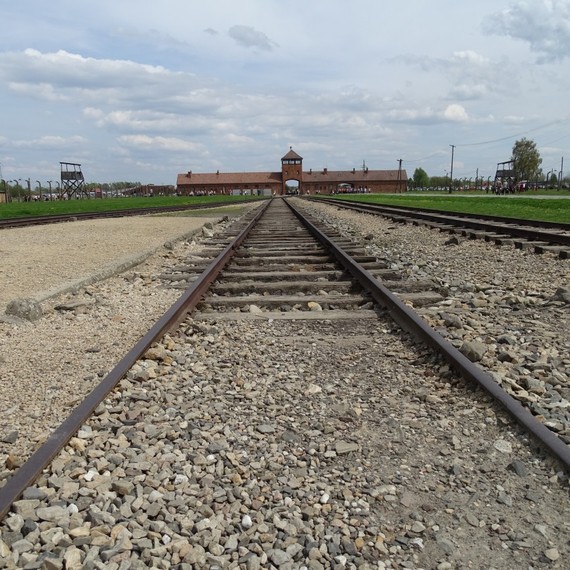 Last week I went, for the first time, to Auschwitz, the infamous Nazi death camp on the outskirts of Krakow in Poland. Well over 1 million people were murdered there; of that number, close to 1 million were Jewish and the rest were Polish, Gypsies, Russian prisoners of war and others tragically caught in the web.

Frankly, I thought I was prepared. Many of my childhood friends were children of survivors, and I had grown up with the number tattoos on their parents' arms emblazoned on my brain. I had been to the various museums, exhibits, and lectures; read all the books; and seen all the movies. I thought I knew the story well, had internalized it, was able to project forward its lesson of "Never again" -- or so I thought.

I went with two friends -- one Czech, the other Polish. Our guide, fittingly, spoke only Hebrew and Polish. He called the murdered dead "korbanot" -- "the sacrifices" -- and I will return to that word and thought soon.

It was a beautiful day. The sun was shining, the grass was green -- very green, way too green -- and sprinkled with yellow daffodils. The barracks stood in orderly rows, and the walkways were clean and neat. There were many visitors -- lots of young people, Poles in school uniforms, Australians in shorts and Akubras, Americans -- a polyglot assembly come to witness the unthinkable yet very relevant.

Our guide told us to imagine the scene as it was. No grass, no daffodils, just mud. The stench must have been unbearable, the sounds unnerving, the sights horrific.

The trains arrived, the selection began, the soon-to-be-dead went one way, and the yet-to-be-dead another. Piles of belongings were left on the platform; they were sorted, warehoused and sold.

It was all very familiar. I had been over it countless times in my head, and as I mechanically walked from place to place, from camp to camp, my feet seemed to know where to go, and I had a heavy sense of déjà vu. I had been here; we all had been here.

Every minute I was there was another experience. Every step I took was another event, every breath another encounter, yet there was one moment that defined the visit, one I had not been prepared for, and it is the one that leads to what I hope will be a shareable and relevant point.

One room was just shoes, another brushes of all kinds, a third children's toys, a fourth suitcases. It was heartbreaking to imagine the items' long-dead owners, their names on the suitcases, with special markings for the bags of children. What had they been thinking when they packed? What did they believe when they arrived? When did they realize the hoax?

And then you enter a room where photography was forbidden. Here there was only hair -- human hair. Braids, pigtails, long, longer, blond, brunette, red -- all discernible but faded now.

Truthfully, it was the moment I lost my composure. I began to cry, and as I followed the path, I came upon a table where, beneath glass, was a collection of letters. I stopped, and through my tears I read them, and that was the moment where my resolve stiffened and I fast-forwarded from heartrending history to distressing current events.

The correspondence was between a Nazi commandant and his superiors, negotiating the price per kilo of hair to be sold to textile and other manufacturers for use in making various products -- and by the way, the next window over had samples of the products that had been forensically proven to contain human hair with traces of Zyklon B gas.

That was the moment I realized that morality was an imposed concept here; morality had been transcended. What had begun as hatred had morphed into business: "It was my job." The efficiency of the murders, the documentation of the events, the effectiveness of the program, the sheer competence of it all -- that was the most frightening thing to me.

I said Kaddish -- the prayer for the dead -- at the gas chamber/crematorium of Birkenau II, again not just as a tribute memorial for the "sacrifices" but as a wake-up call for myself.

My takeaway? I refer you to the Museum of Tolerance in New York and Los Angeles. I quote from their mission:

Challenges visitors to confront bigotry and racism, and to understand the Holocaust in both historic and contemporary contexts. Through interactive workshops, exhibits, and videos, individuals explore issues of prejudice, diversity, tolerance, and cooperation in the workplace, in schools and in the community. Additionally, targeting educators, law enforcement officials, and state/local government practitioners.

We need to confront hate before it loses its human connection, because when it does, all of our moral hand-wringing and good and decent intentions collapse in a pool of irrelevancy.

Our headlines every day are full of examples. It makes no difference if you are a cop or a criminal, a religious fanatic or a nationalist hardliner, a conservative or a liberal; when the line is crossed, when we can no longer benchmark a standard of basic human morality, we don't have to imagine the results, because we see them all around us.

There is a straight line from Auschwitz to Rwanda and Cambodia and Darfur and, sadly, more.

What more can we do? Again I refer you to the Museum of Tolerance, specifically to a program called "The Power of Words":

The Power of Words exhibit features a film that demonstrates how modern-day figures like Martin Luther King, Jr., John F. Kennedy and Franklin Roosevelt used their words to instill hope while others like Hitler, Stalin and Osama Bin Laden and other extremists used the same power to spread lies and incite hatred.

That is what we can do. Our use of social media and our daily discourse seem to be reaching new lows (or highs?) of poor behavior, as if we have a right to incite, a right to bully, a right to be inhumane.

"[M]orality is the basis of things and truth is the substance of all morality."
--Mahatma Gandhi

Thank you for sharing this journey with me, as did my two friends Martin and Michael last week.

If nothing else, think about that letter.