30-year-old Drew Philp, writer, journalist, screenwriter is doing something awesome and real, plus giving mamas everywhere, grey hair. He's walking from Detroit to Cleveland to talk and listen to you, you, and you beginning July 3rd, 2016. 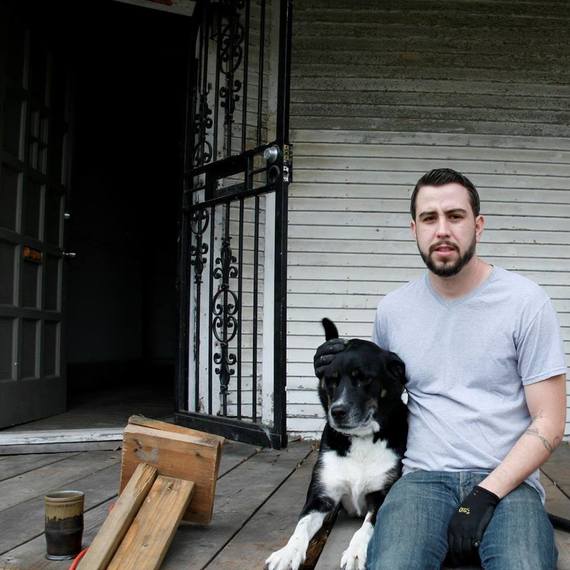 Drew's done a lot of brave and inspirational things, more than a lot of folks can aspire to accomplish in a lifetime. He's a helper who tries to fix the broke and broken. The real deal who is making a real difference, like the Oklahoma cowboy, Guthrie. Drew lives in Detroit with his dog, Gratiot, in a house he built with his own hands from the shell of one purchased for $500. (You can read about why he bought the house here https://www.buzzfeed.com/drewphilp/why-i-bought-a-house-in-detroit-for-500?utm_term=.aawGlMJvGP#.xcKQ4nkxQE )

Why is Drew walking, and how you can follow his important journey? Drew said:

I'm going to be walking to the Republican National Convention in Cleveland from my house in Detroit in early July to talk to average Americans about their politics, the state of the country and where they hope we're headed. There's a long, and in this age of punditry nearly forgotten, tradition from Alex De Toqueville to Woody Guthrie of getting out amongst the people and speaking to them directly and plainly. I've always found Americans to be impossibly kind and generous and have said for a long time, if you want to restore your faith in humanity, go hitchhiking in America.

I'm going to go see what you all have to say.

If you see me stop and say hi! If I'm tired offer me somewhere to sleep! If I'm hitchhiking give me a ride!

You can follow my journey in Beltmag.com and I'll be sharing my dispatches here and on Twitter @drewphilp

As Woody Guthrie sang: "As I went walking down that ribbon of highway, I saw above me that endless skyway, I saw below me the golden valley, this land was made for you and me...

Good luck, Drew, and sweet traveling mercies. We can't wait for you to share, yet, another brave journey.

- Drew Philp's work has appeared in BuzzFeed, the Guardian, Publishers Weekly, Spirit Magazine, the Detroit Free Press, the Metrotimes, the Bakersfield Californian, and the Michigan Daily, among other publications. In 2017 Scribner will publish his first book of nonfiction, a yet-untitled memoir on Detroit. He was recently selected as one of the 2016 11th Hour Food and Justice reporting fellows by Michael Pollan and Malia Wollan at the University of California-Berkeley. In addition to nonfiction Drew has been a writer in the film industry, having written two feature length dramas on contract.